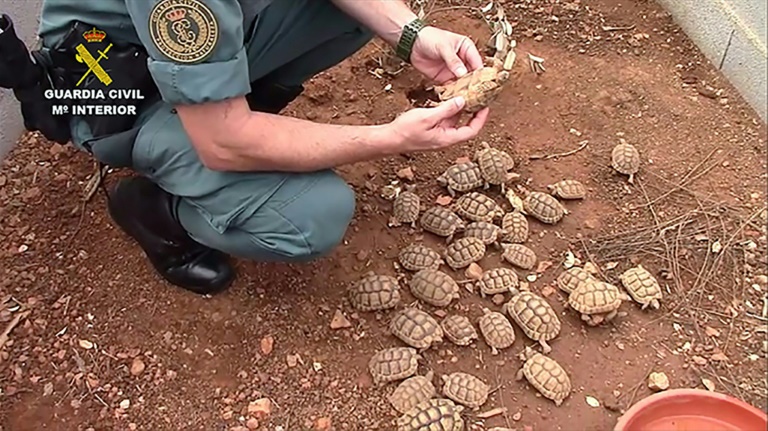 A handout picture released by the Spanish Guardia Civil shows an officer inspecting some of the tortoises found in a raid on what they called Europe's largest illegal farm. (Photo: AFP)

Officers arrested two German men suspected of operating the farm on the holiday island of Mallorca, as well as a Spanish owner of an exotic pet store in Barcelona who sold the animals raised on the farm, police said in a statement.

Another two Germans and a Spaniards are under investigation.

"Officers searched the farm and found that it was much bigger than expected and its aim was to breed at an industrial level different species of sea and land turtles," the police statement said.

A "land turtle" is more commonly called a tortoise in English.

The farm near the town of Llucmajor in the south of the Mediterranean island was the "biggest illegal turtle farm in Europe," it added.

Police seized over 1,100 turtles and tortoises of 62 different species, including 14 of the world's most endangered kinds such as the radiated tortoise from Madagascar, the Vietnamese pond turtle and the Chinese red-knecked turtle, as well as over 750 eggs, as part of their operation.

Almost all turtle species are endangered. Their eggs are considered a delicacy and they are also slaughtered for their meat, skin and shells.

The three suspects face charges of trafficking in endangered species and money laundering.