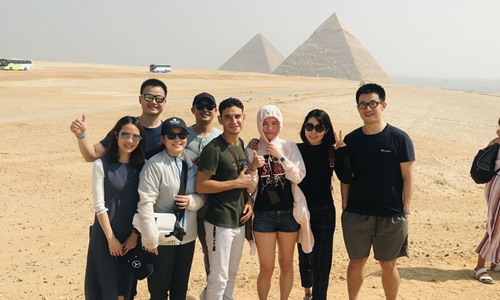 Ahmed Saeed (C), a Chinese-speaking tour guide, and tourists are posing for group photos near the Giza Pyramids in Giza, Egypt, on Sept. 27, 2018. (Photo: Xinhua)

Ahmed Saeed, an Egyptian young man, thought in the beginning that he would never be able to speak Chinese one day, let alone the Chinese language would be a turning point in his life.

"In my first year of studying Chinese at university, once an assistant professor wanted to listen to our Chinese reading in class. After we all read some texts, he approached me and told me that I was the worst at Chinese reading," the 24-year-old man recalled.

Now Saeed looks back at those days with a smile, after he has become a professional Chinese-speaking tour guide with a well-paid job at a travel company in Cairo.

"I decided to take the challenge and continue, but it was difficult and stressful," he told Xinhua.

Saeed studied Chinese at the Faculty of Languages and Translation of Cairo-based Al-Azhar University. After he lost hope in the first year, he had to join Confucius Institute at Cairo University for further Chinese learning and he started to feel improvement along with hopefulness.

He came from Upper Egypt's province of Minya, costing his average family extra money to live and study in the capital Cairo.

He graduated in 2018 and he is now a successful tour guide with fluent communication with Chinese tourists, after he worked as a freelance interpreter for Chinese companies for a while.

"I started my first Chinese interpretation freelance job in my third year at university. It was a textile factory in Egypt being visited by a Chinese delegation. It was a five-day job that I did successfully," said the young man.

He noted that a lot Chinese tourists love resort cities like Hurghada and many are fond of antiquities and monuments. "I once had a Chinese tourist who spent the whole day at the Egyptian Museum in downtown Cairo," Saeed said.

He described the Chinese people as "friendly, sociable, respectful and modest."

Saeed, who is currently engaged and getting ready for marriage, stressed that speaking Chinese has definitely changed his life.

"Now I am financially able to afford getting married and I can also assist my parents who helped me a lot before graduation. They are proud of me now," the Egyptian tour guide told Xinhua.

According to Chinese official statistics, half a million Chinese tourists visited Egypt in 2018.

As for Asmaa Fathy, 29, who is a full-time tour guide of a travel company in Cairo, she always wanted to be a teacher since childhood. But when she joined high school, she loved the subjects related to history and antiquities the most and wanted her future job to be related to them.

"My uncle works in the tourism sector, so I asked him to recommend a language to study at university. He recommended Chinese due to the growing demand for Chinese-speaking tour guides," Fathy said.

"I knew that being a tour guide is close to my wishes, as it includes both history and teaching," said the Egyptian young woman, who graduated in the Faculty of Languages of Cairo's Ain Shams University in 2011.

Fathy travelled to China once about five years ago, when she was working for Chinese smartphone maker Oppo before becoming a tour guide. She visited Oppo's head office in Shenzhen.

"I loved Shenzhen, for it's a beautiful modern city. But I want to visit China again to see monument-rich cities such as Beijing and Xi'an," she told Xinhua.

At the travel company she works for, they refer to tourist groups as "files." Fathy loved those files including Chinese children the most.

"I don't want their tour to be over because I get so attached to them and feel sad when they leave. Children are generally cute, but Chinese kids are so cute and beautiful," said the Egyptian tour guide.

From experience and communication, Fathy described the Chinese people as "friendly, sociable and hardworking," noting that they maintain a healthy lifestyle.

"They sleep, eat and exercise well and regularly," she noted.

"Once I mention my name and tell them that I will be their tour guide, they surround me with massive positive energy, praising my spoken Chinese and my looks too, because they like Arabian looks," she pointed out.

She said with a smile that older Chinese ladies acted just like her own mother, as they would similarly urge her to get married.

"Once I had torn ligaments in my leg during a seasonal Chinese holiday and I had to work. The Chinese people were so cooperative, holding me up. I didn't have a cane. They were my cane," she recalled.

Fathy said that her job is well paid and learning Chinese did not only make a difference in her life financially, but spiritually too.

"I believe that a tour guide is just like an ambassador. I represent my country and culture to the Chinese people," she added.

"I would love to leave the Chinese tourists good memories when they go back home. They will see our pictures together and remember me and my country," the Egyptian tour guide said.