Spit-roasted cake and spas in Pyrenees 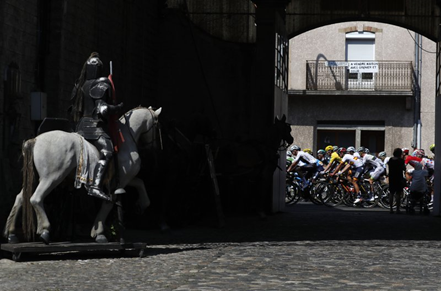 Tour de France riders won’t have time to enjoy the delights of Bagneres-de-Luchon’s thermal bath in the bucolic spa town which hosts the start of Wednesday’s brutal sprint through the Pyrenees.

The peloton is set for a day of suffering on an unusually short but super-hard stage ending at the summit of the Col du Portet, which culminates at an altitude of 2,215 meters.

Here’s a gastronomic, sporting and cultural glance at the route for Stage 17:

BAGUETTE AND BUTTER: At just 65 kilometers (40.4 miles), Stage 17 is the shortest non-time trial stage at the Tour in the last 30 years. It features a grueling final climb of 16 kilometers at an average gradient of nearly 9 percent. It will be non-stop climbing from the start, with two category-1 climbs before the final ascent, and more than 38 kilometers of climbing in all on the day’s menu. Tour organizers will also test out a Formula One-like grid start. The top 20 riders in the standings will start first, with the yellow jersey wearer in pole position, while lower-ranked riders will begin in four more groups further behind.

PLAT DU JOUR: Fancy a slice of one of the finest and softest cured hams in Europe? Go for a plate of Noir de Bigorre ham. A true gourmet delicacy, it’s made from black pigs fed with grass, cereal and acorns.

VIN DU JOUR: There are not so many vineyards in the Pyrenees but winemakers who have settled at the foothills of the mountain range produce an excellent white that remains relatively unknown. With hand-harvested grapes, the Pacherenc du Vic-Bilh can be either dry or sweet, depending on when the grapes are picked.

HISTORY: Known as “The Queen of the Pyrenees,” the town of Luchon is home to sumptuous villas from the Belle Epoque and thermal baths built during the Roman era. According to legend, a soldier from Pompey’s legions suffered from a debilitating skin disease but recovered completely after being plunged into Luchon’s waters for three weeks. In 1930, local authorities inaugurated a natural Turkish bath — with galleries more than 150 meters long — and the Vaporarium remains popular to this day.

STAT OF THE DAY: 93.4 — In kilometers per hour (58 mph), Julian Alaphilippe’s top speed in the downhill leading to the finish line in Bagneres-de-Luchon, where the Frenchman claimed his second stage win on the Tour on Tuesday.

QUOTE OF THE DAY: “Did I do some farmer near Carcassonne anything wrong? I will never understand them, so it’s better not to say anything.” Third-placed Tom Dumoulin reacting to the farmers’ protest that interrupted Stage 16.

DESSERT: Gateau a la broche: A multi-layered cake cooked on a spit over charcoal.

NEXT ORDER: Stage 18 on Thursday will offer some respite to the peloton following two difficult treks in the mountains. The 171-kilometer (106.3-mile) leg from Trie-sur-Baise to Pau is mainly flat and could see a sprinter’s win.