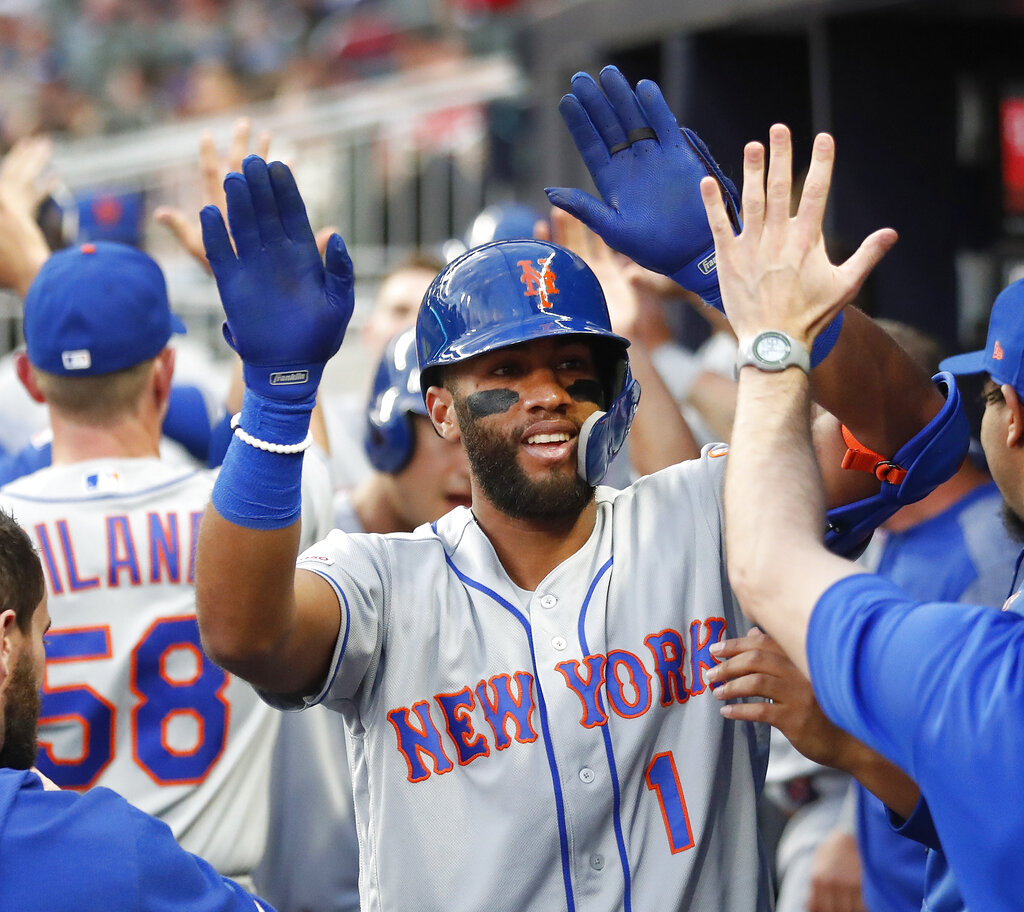 New York Mets' Amed Rosario (1) is welcomed to the dugout by manager Mickey Callaway (36) and Robinson Cano (24) after hitting a three-run home run during the second inning of the team's baseball game against the Atlanta Braves on Thursday, April 11, 2019, in Atlanta. (Photos: AP)

Alonso lined a two-run shot in the seventh off reliever Jonny Venters, a 454-foot laser with a 118 mph exit velocity that splashed into the tank beyond straightaway center and wound up floating softly in the water. The only players with harder-hit home runs recorded by Statcast are Giancarlo Stanton, Aaron Judge and Mike Trout.

Alonso began the night with 15 RBIs, a Mets record through the first 11 games. His sixth homer put New York up 6-2.

With runners at second and third in the ninth, Edwin Diaz struck out Freddie Freeman with a 99 mph fastball for his fifth save.

Ronald Acuña Jr. went deep off New York reliever Luis Avilán in the eighth, his fifth homer sailing 462 feet over the left field wall and into the second level of stands. 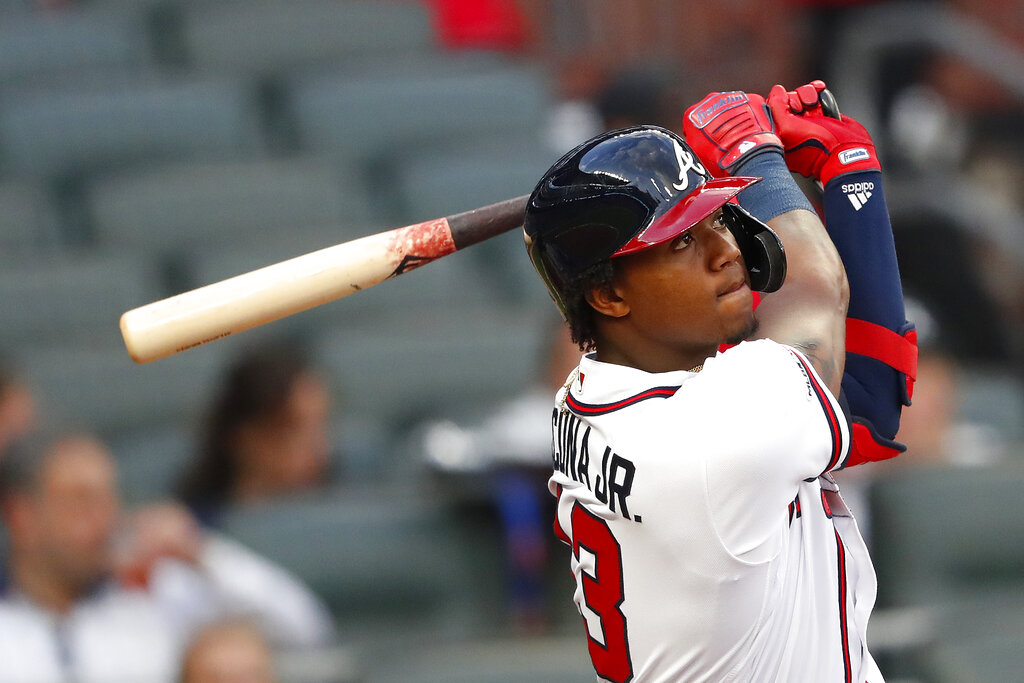 Atlanta Braves' Ronald Acuna Jr. watches his RBI triple during the first inning of the team's baseball game against the New York Mets on Thursday, April 11, 2019, in Atlanta.

Matz (1-0) had gone eight straight starts without a decision, a streak that began last Sept. 1. He allowed two runs and four hits with one walk and eight strikeouts.

Rosario's homer gave the Mets a 3-1 lead in the second. New York had three other hits against starter Kevin Gausman — Juan Lagares' single in the fifth, Wilson Ramos' single in the sixth and Jeff McNeil's single that advanced Ramos to third and chased Gausman.

Wes Parsons gave up Rosario's run-scoring single to make it 4-2.

Gausman (1-1) allowed four runs, three walks and struck out five. He walked his first two batters in the second before facing Rosario.

Atlanta led 1-0 in the first on Acuña's RBI triple. Johan Camargo's first homer cut the lead to 3-2 in the second.

Matz improved to 5-0 with a 2.78 ERA in eight career starts against the Braves. The left-hander has a 2.10 ERA in his last 10 starts dating to last season.

Mets: Manager Mickey Callaway said 3B Todd Frazier, on the injured list with a left oblique strain, is close to returning. Frazier played five innings at third base and four at first in a rehab appearance with Class A St. Lucie. He went 1 for 3 and is hitting .217 with no homers and four RBIs in six games, a span of 23 at-bats. Frazier played a few innings at shortstop on Tuesday. 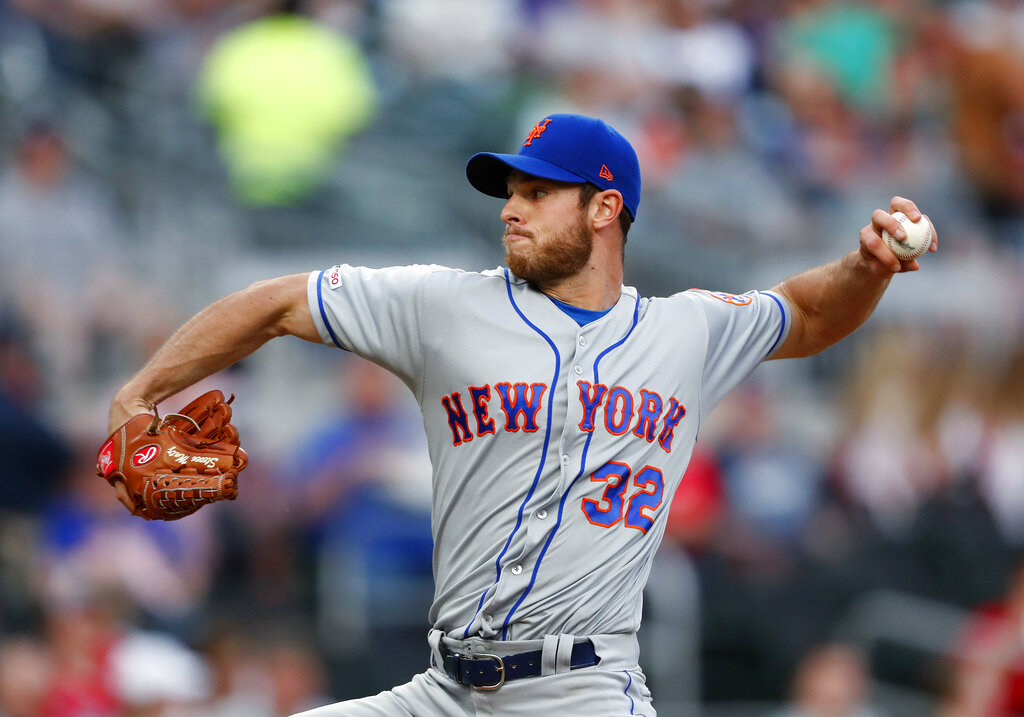 New York Mets starting pitcher Steven Matz works in the first inning of the team's baseball game against the Atlanta Braves on Thursday, April 11, 2019, in Atlanta.

Braves: Manager Brian Snitker said RHP Mike Foltynewicz needs to make another rehab start to get his pitch count up to 90 before coming off the injured list. Foltynewicz, an All-Star last season, will make his third rehab appearance with Triple-A Gwinnett on Monday. He is sidelined with a right elbow bone spur.

A few hours before the first pitch, Albies and the Braves agreed to a $35 million, seven-year contract, a deal that includes team options for 2026 and '27. Albies struck out against Robert Gsellman with the bases loaded in the seventh and went 0 for 5. The second baseman made a dazzling play in the fourth, leaping to snag Ramos' liner.

Snitker was ejected in the bottom of the eighth by plate umpire Dan Bellino for arguing balls and strikes.

Mets: RHP Zack Wheeler (0-1) brings a 10.24 ERA into his third start after walking a career-high seven in his last outing. In 10 career starts against his hometown Braves, Wheeler is 5-3 with a 3.21 ERA.

Braves: RHP Kyle Wright (0-1) improved in his last outing, a no-decision in which he allowed five hits and two runs in six innings against Miami. He will face the Mets for the second time in his career.

Cover image: New York Mets' Pete Alonso (20) celebrates after hitting a two-run home run during the seventh inning of the team's baseball game against the Atlanta Braves on Thursday, April 11, 2019, in Atlanta.