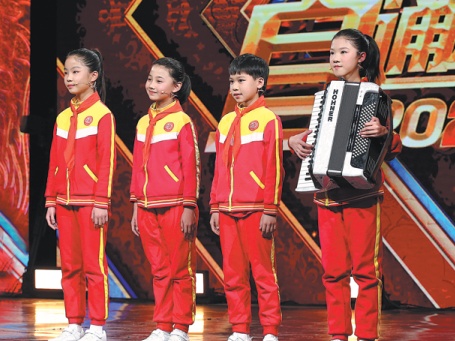 All clad in light purple sweaters and white pants or skirts, a choir of 42 children from a rural school in Central China's Hunan province are singing gently.

Despite appearing shy and nervous, their clear voices and sincere faces captivate the audience inside a studio and a panel of celebrities judging the contest to select talent for China Media Group's 2021 Spring Festival Gala. The annual gala is the most watched television show in China.

The annual gala, which is held on Lunar New Year's Eve, has become a "tradition" during Spring Festival celebrations. Millions of families switch on their TV sets to watch the gala－usually lasting over four hours－after having a sumptuous dinner.

Consisting of a lot of performances, from music programs to crosstalk and acrobatic shows, the gala which has been consecutively held for 37 years gathers many stars and artists, normally hitting headlines during the festival.

Even for many renowned stars, getting a chance to perform on the gala's stage is an honor and a gateway to more popularity.

But China Media Group, the host and broadcaster of the gala, has launched a program to help ordinary people and lesser-known artists to contend for an opportunity to perform in the gala.

The program consists of two shows, Wo Yao Shang Chun Wan ("I want to attend the Spring Festival gala") and Zhi Tong Chun Wan ("go straight to the gala"), respectively serving as the first-round selection and the second-phase finale.

Lasting from November to the beginning of this month, the two shows, with a total of 12 episodes, have drawn nearly 100 groups and individuals.

The children's choir from Qihang School in Dayuan village in Hunan has beaten dozens of contestants to win their debut on the 2021 Spring Festival Gala.

Chen Liangwei, president of the school, tells China Daily that he and all the children are very excited and rejoiced upon hearing the news.

Born in a poverty-stricken village in Hunan, Chen says he earned his first "bucket of gold" from organizing undergraduate exam-training programs.

With a personal investment of 40 million yuan ($6.2 million), Chen founded the school in 2016, with 80 percent of all its 1,500 students being "left-behind" children－referring to youngsters in rural areas whose parents work in cities.

Chen says the school started the chorus in 2017 to boost the students' self-confidence with the power of music.

Over recent years, Chen and the choir's teachers have kept a close eye on musical contests and variety shows, as they thought attending such events would make the children more social.

"But we have never expected that we would be chosen to perform on the gala stage. Some children said their parents would be proud to see them appear on TV," says Chen.

Chen Linchun, the chief director of the 2021 Spring Festival Gala, along with more than 10 celebrities selected the finalists on Feb 5.

He says the attempt is to make the program a down-to-earth platform that is open to ordinary people.

"We wish to tell the audience that it is possible to be part of the gala if you have the passion and talent to pursue your dreams," he says.