Recent weeks have seen the already painful situation facing live performances in the US grow increasingly dire, with major companies along with Broadway somberly scrapping hope to re-open before next summer and scrambling to find ways to stay in the public eye.

New York's Metropolitan Opera was the first top outfit to cancel its entire 2020-21 season over the coronavirus pandemic, followed by the highly bankable Broadway theater district and the city's famed Philharmonic symphony. 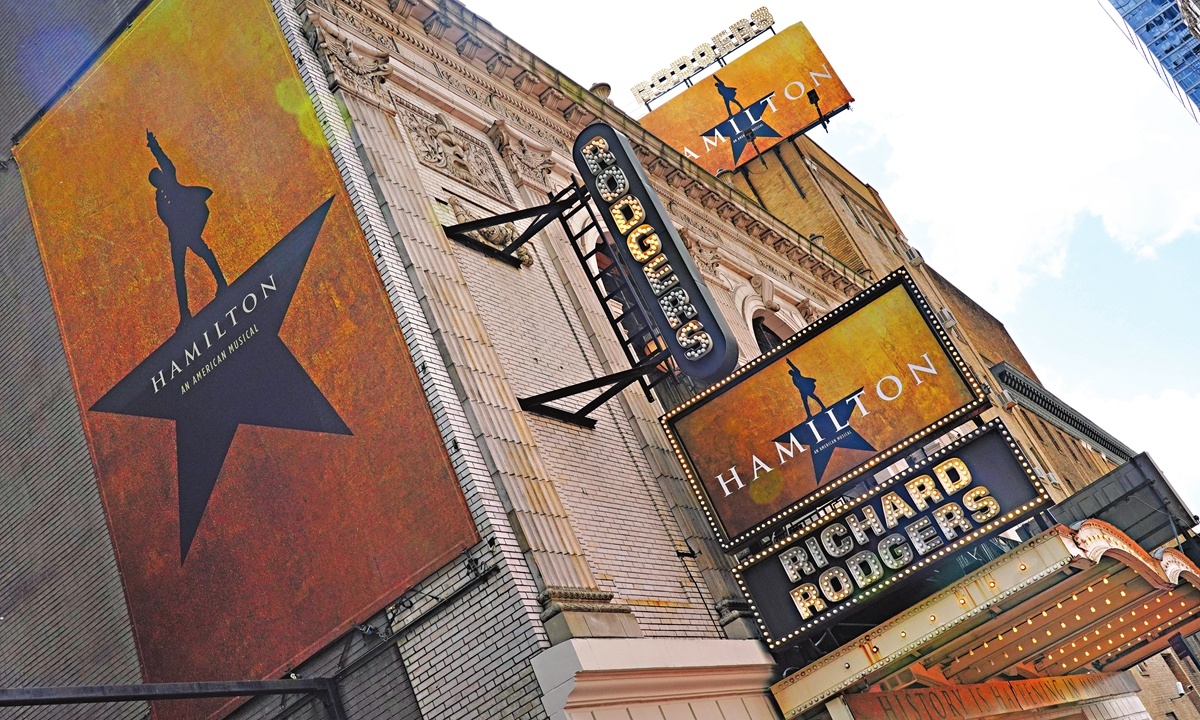 A billboard for Hamilton on display around the Broadway Theatre in New York on June 29 The Broadway League of New York announced on June 29 that due to the coronavirus pandemic, New York's Broadway performances will be suspended for the rest of 2020. Photo: VCG

Across the nation company directors are facing similar decisions, with the Boston Symphony Orchestra following the lead of its New York neighbors.

Elsewhere many organizations are still aiming to open in January 2021 as they pilot ways to stay fresh and avoid falling into the red - but the future appears grim.

Many companies have already budgeted for a season sans spectators in a country where the coronavirus caseload continues to add about 40,000 new infections daily.

Seattle anticipates a loss of $6 million in revenue, as New York's Phil estimates to lose $20 million and the Philadelphia Orchestra more than $25 million.

"I always have hope, but I think it is going to be very unlikely we're going to do anything in front of live audiences anytime soon," said Matias Tarnopolsky, the director in Philadelphia.

The pandemic has forced layoffs, furloughs and pay cuts across the performing arts, as organizations including the Phil and the Met are bargaining with unions to adapt musicians' contracts to the financial challenges of the moment.

Government subsidies are not the norm for US orchestras and operas, which rely on donations and wealthy patrons, and to a smaller extent ticket sales, to pay bills and keep endowments robust.

"If the fundraising holds we should be able to make it to the summer, but we still have a very large fundraising goal," said Kristina Murti, the Seattle Opera's communications head.

"It's always stressful to raise a lot of money," she said, especially in an already gloomy economy.

But companies have by no means given up on offering content, most of it virtual, some of it free and all of it breaking new ground.

The Atlanta Opera - which months ago canceled its 2019-20 season and postponed the following performance slate by a full year - has devised a unique fall series that will see live performances of Pagliacci and The Kaiser of Atlantis under a circus tent on a baseball field starting on Thursday.

Tickets in the southern city will be sold as four-person socially distanced "pods," welcoming up to 240 people per show. Singers will perform behind plexiglass or wear face coverings, and all patrons must wear masks and get temperature checks.

But he emphasized the move was less about money - in April the company slashed its $10 million budget by 34 percent and like everyone else, anticipates losses - and more about adapting their art to a society in distress.

"We all are very grateful for those handheld devices and TVs, but there is no replacement for live performance."

The Phil meanwhile launched an outdoor Bandwagon series, with small ensembles playing on city street corners, as the Los Angeles Opera showcased its singers lulling their own children to sleep with bedtime songs.

Tarnopolsky sees silver linings in the struggle, saying virtual content additions "are changes that will last far beyond the current pandemic and be part of the orchestra's offering forever."

Still, fewer shows and reduced rehearsals have been tough on musicians themselves, who are grappling with salary cuts and limited modes to cultivate their art.

"I have a lot of concern about musicians leaving the field because the situation is so difficult," said Simon Woods, who heads the League of American Orchestras, which represents some 700 organizations.

Maxim Moston - a violinist who regularly performed on Broadway, most recently for the musical Moulin Rouge - is worried about New York's future as an artistic nerve center.

"People can't afford to pay New York City rents while sitting around and waiting for it to be safe for them to practice their professions and their passions," he said.

His family owns their apartment which provides some relief - but at a certain point enough might prove enough.

"I think that many of us, myself included, haven't truly faced that reality yet," Moston said.

"I'm hanging on, waiting for a miracle to come."