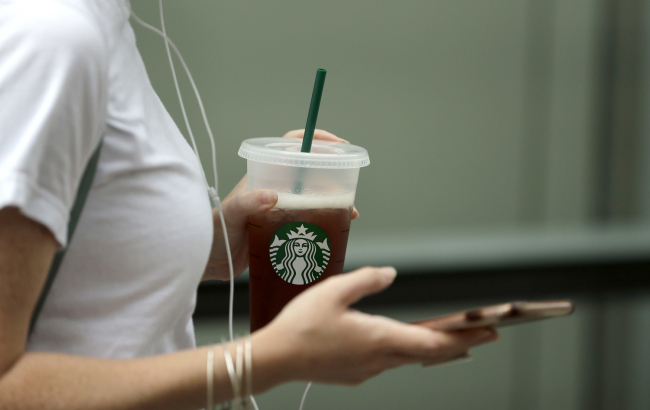 A patron departs a Starbucks cafe in the famed Loop area in downtown Chicago, Illinois, May 29, 2018. (Photo: AP)

Starbucks is moving forward with its campaign to reduce its use of plastic, with customers in Shanghai and Shenzhen the first in China to be offered paper straws and strawless sippy lids, rather than plastic straws. It's part of a campaign by Starbucks to phase out plastic straws in all of its 29,000 cafe's worldwide by the end of 2020.

Launched on Monday to coincide with World Earth Day, the nearly 1,000 Starbucks locations in Shanghai and Shenzhen have also begun offering incentives to customers to reduce their use of non-recyclable materials, Starbucks announced via is Chinese Weibo account.

All 3,800 Starbucks outlets across China are now offering a 4 yuan discount for customers who bring in their own drink containers.

The company has also announced plans to launch a new series of beverages on Thursday, April 25, 2019, which will be offered in specially-designed, reusable cups.

Plastic straws have become the latest target of a continuing ecological campaign to reduce the use of non-biodegradable plastics.

Starbucks is among a growing number of US and multi-national food and beverage companies which have begun replacing plastic straws with biodegradable paper alternatives, the majority of which are created using recycled paper materials.