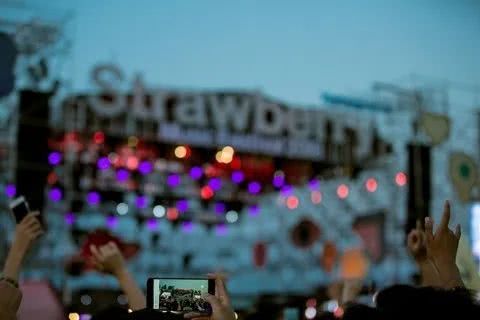 GUANGZHOU, March 16 (Xinhua) -- As the melody of "Do you want to dance?" by Chinese pop-rock band New Pants began, Xu Yuan responded with a whirlwind of body movements in his bedroom.

Xu was one of about 1.34 million participants who tuned in to a recent online music festival that catered to a vast number of stay-at-home fans amid the coronavirus outbreak.

"I had been staying at home for over a month since the onset of the outbreak," said Xu, a music fan from south China's Guangdong Province. "I was immediately attracted by the new form of music festival."

"An online music festival lacks the passionate atmosphere of an offline event. But I can dance more freely as no one is watching," he said.

The online music festival, called Strawberry_Z, was launched by Chinese label Modern Sky. Over the past decade, it sponsored 91 Strawberry Music Festivals across China with a total attendance of over 6 million.

Over the past weeks, nearly all live performances and cultural events in China have been postponed or canceled due to the coronavirus outbreak. For China's cultural and entertainment industry, going online seemed to be the only way out to mitigate its impact.

"Strawberry_Z was launched recently in an effort to salvage the business from the fallout of the outbreak," said Shen Yue, vice chairman of Modern Sky.

The online music festival, which has run for two seasons since February, consisted of three parts: archive videos of Strawberry Music Festivals, homemade video programs by musicians, as well as livestreaming performances.

It proved popular with audiences. In the weeklong second season of the event, it attracted 15.8 million total views.

For Shen, the online music festival offered comfort and companionship for music fans during the trying times of the outbreak.

"At present, people staying at home have a psychological need for companionship, which can be found in music and offered by the musicians," said Shen.

For musicians, the format of an online music festival also provided them with a chance to communicate with fans in a more innovative way. Besides music, some also shared with fans tips on cooking, daily exercises and even skincare.

"It is a new experience to communicate with fans through online instant messaging," said Pang Kuan, keyboardist of New Pants. "I was often overwhelmed by a flood of comments from the fans."

After experiencing the vibe and novelty of the online music festival, many fans hope it will become a fixture even after the virus outbreak subsides.

"I hope one day in my bedroom, I can dance with the audiences at world-famous music events such as the Glastonbury and Coachella festivals," said Xu.