CULTURE Sticking it to winter ailments with TCM

Sticking it to winter ailments with TCM

HEFEI－The dog days, also known as the hottest and most sultry days of the year, have come and a new fashion has regained popularity among many Chinese who believe the best opportunity to treat diseases that often harass them when it's cold is sweating through the summer heat. 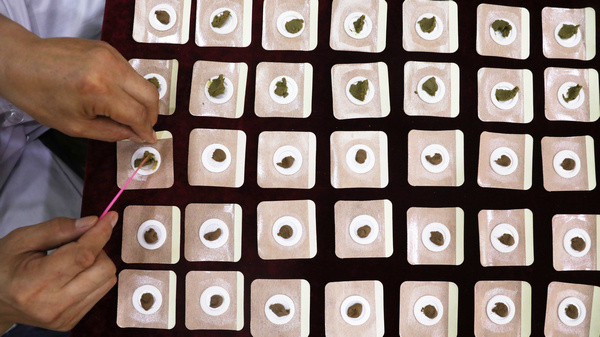 Sanfutie, a kind of plaster using traditional Chinese medicine, has been a welcome treatment as it is believed to soothe the body and help relieve the discomfort of illnesses such as asthma, bronchitis and arthritis in winter.

According to China's lunar calendar, sanfu refers to the hottest 30 to 40 days in a year, usually lasting from mid-July to mid-August.

"Today I asked for a day off for sanfutie treatment. This is my second year of having the therapy," says Shi Xuan, an asthma patient whose condition has improved notably last year after first trying the therapy.

During the process, seven medicated patches, each about the size of a credit card, were placed on his back, with another one below his Adam's apple.

"My aunt used to have asthma as well, but she got much better after receiving sanfutie treatment for five years. So, she recommended it to me," says Shi.

"The patches are placed on different acupuncture points for different diseases and are kept there for 20 to 30 minutes," says Liu Guangxia, a TCM specialist at a hospital in Hefei, capital of East China's Anhui province. 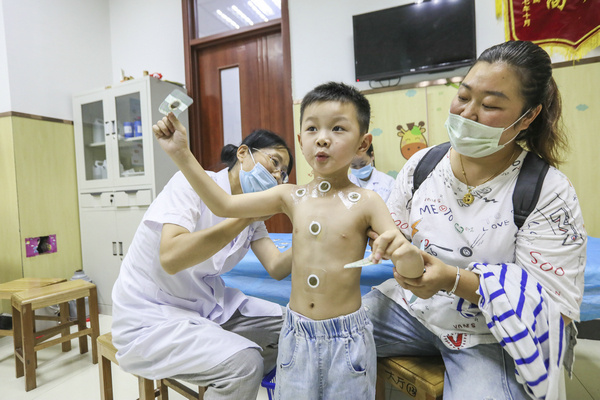 A boy getting the plasters applied to his body in Tengzhou, Shandong province, last month. SONG HAICUN/FOR CHINA DAILY

A course of treatment often includes three rounds of plasters in summer, which often falls on the beginning, middle and end of sanfu respectively, Liu says.

Under the TCM system, it is believed that the yang energy in the universe reaches its peak in summer, while the yin energy is at its lowest ebb, and the same is true for the energy in the body.

"The therapy seemed quite effective because he coughed much less last winter. Therefore, we decided to come for a second year," says Shi's wife, who was also taking the therapy in the hope of boosting her immunity.

Treating winter diseases at the height of summer is a notion promoted in TCM, and it reflects the philosophy of preventing disease over treating it, says Wei Fuliang, an acupuncturist.

Though the number of reservations for sanfutie treatment at some hospitals dropped slightly this year due to fears of COVID-19, the traditional treatment is still favored by many Chinese.