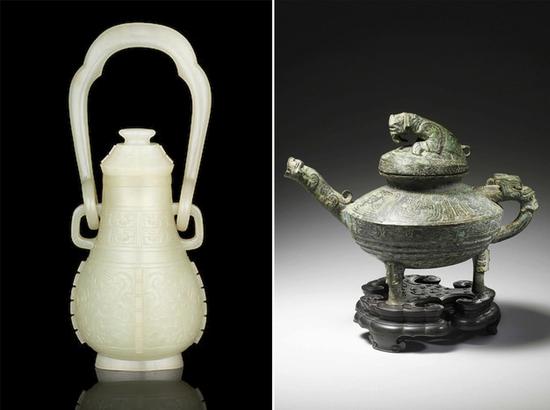 A jade carving made in the Qing Dynasty (left) and a rare bronze water vessel known as Tiger Ying are believed to have been looted from Beijing's Old Summer Palace in 1860. (Photo: China Daily)

More than 150 years after French and British troops sacked Beijing's Old Summer Palace in 1860, relics that may have been taken from the site are showing up at foreign auction houses, prompting an outcry from China.

Many other items thought to have been taken from the palace, which is also known as Yuanmingyuan, are housed in museums and private collections around the world.

In recent years, Beijing has called for the return of such items and for them to be withdrawn from sale when listed by auction houses.

Questions of ownership and the legality of selling items that may have been looted arose again recently when a rare bronze vessel was put up for sale at an auction house in the English city of Canterbury, Kent, in April.

The provenance of the item can be traced to a Royal Marines captain, and, through documents found, it has been suggested the relic was taken during the looting of the palace.

The auction had Chinese authorities crying foul and Chinese social media users venting their anger, with the nation's State Administration of Cultural Heritage issuing a statement in which it said it opposed the sale of illegally held cultural relics.

It said in the statement it "strongly opposes and condemns Canterbury Auction Galleries' insistence on auctioning the suspected illegally obtained cultural artifact despite solemn protest from China and conducting commercial hype in the name of the wartime looting of cultural relics".

The administration added that it would not support participation in the auction by Chinese individuals or institutions, and it called on potential bidders to boycott the sale. The destruction of the Old Summer Palace took place during the Second Opium War (1856-60). The buildings were first looted and then set ablaze under the direct orders of Lord Elgin, Britain's high commissioner to China.

The looting and destruction were carried out in response to what the British claimed was the torture and, in some cases, deaths of several dozen British prisoners.

French author Victor Hugo wrote about the destruction: "We Europeans are the civilized ones, and for us the Chinese are the barbarians. This is what civilization has done to barbarism. Before history, one of the two bandits will be called France; the other will be called England."

While it is not known how many items survived the looting of the Yuanmingyuan, in 2009, the palace's then-director, Chen Mingjie, claimed that some 1.5 million objects were looted and that many are now scattered around the world.

By 2016, the China Cultural Relics Academy estimated that 10 million Chinese items were overseas, including those in private collections.

In the UK, items thought to have been looted are on display in several military museums, according to Louise Tythacott's paper Trophies of War: Representing Summer Palace, Loot in Military Museums in the UK.

Tythacott, a lecturer at London's School of Oriental and African Studies and an anthropologist and museum curator, said, "Yuanmingyuan objects on display in military museums may be conceptualized as trophies of war, a mode of collection fundamentally characterized by power."

She added, "Yuanmingyuan loot, reconfigured as trophies, thus represents a regiment's pride in a victorious campaign."

Among the collections that include items from the palace are the Royal Engineers Museum's in Chatham, which Tythacott said holds the largest collection of material from the Old Summer Palace.

Charlotte Woodhead, an assistant professor at Warwick University's School of Law, said, "Some national museums in the UK are subject to specific statutory governance that prevents them from returning objects even where they consider themselves under a moral obligation to do so.

"This was tested in a legal case in 2002 and while this prohibition on transfer has been lifted in the case of certain human remains and Nazilooted cultural objects, it remains for many other objects in national museums."

Many Chinese writers have called the looting and destruction of the Yuanmingyuan a national humiliation.

Since the start of reform and opening-up in 1978, Chinese authorities and individuals have worked harder to repatriate antiques from other countries.

In 2009, China announced plans to send a team of specialists to museums and libraries－including the British Museum and the Victoria and Albert Museum－in an attempt to catalog items that had been removed from China.

That same year, the bronze statues of animal heads that had adorned a fountain at the palace and that were taken during the 1860 looting, were set to be auctioned by Christie's in Paris.

The rat and rabbit zodiac heads were acquired by French fashion designer Yves Saint Laurent and, after his death, many objects from his estate were sold again, including the two zodiac heads. Christie's announced that auction in 2008, claiming that the sale of the statues was legal and would go ahead.

Liu Yang, a Beijing-based lawyer who helped organize a lawsuit against such activities, said the auction and refusal to return the items to China "deeply hurts our nation's feelings."

The winning bidder, Cao Mingchao, the owner of a small auction house in China, subsequently refused to pay for the items as a protest.

In June 2013, Francois-Henri Pinault, chairman of Groupe Artemis, owner of Christie's, returned the two bronze animal heads to China in a move aimed at strengthening diplomatic and trade ties between France and China.

In 2012, after an outcry in China, auction giant Bonhams Fine Art Auctioneers & Valuers removed two jade carvings that had been listed in a London auction house.

Bonhams said the owner of the jades had asked it to withdraw the items and it did not wish to cause any offense in China.

Chinese treasures have also been acquired by Chinese businessmen to repatriate them.

In 2007, Stanley Ho, the billionaire Macao casino magnate, bought a bronze horse head believed to have been one of the zodiac animal heads from the Summer Palace. Ho paid around $9 million for the item and donated it to China.

In 2014, a museum in Norway said it would return seven marble columns that had been taken from the Old Summer Palace after it received a donation from a Chinese entrepreneur that enabled it to refurbish its China exhibition space.

But the fate of items taken from the Summer Palace is also subject to existing conventions, and China has little or no legal claim to them in the countries where they ended up, many experts said.

"Where an object has been wrongfully taken and has been in England or Wales since before the 1980s, a legal claim in court is unlikely to succeed because, usually, the effect of the statute of limitation would be to extinguish the original owner's legal title to the object after six years," said Woodhead, the Warwick University legal expert.

She said items that arrived in England or Wales after 1981 also would not likely be the subject of a successful claim from the original owner if they were bought in good faith.

But she said museums are obliged under the UK Museums Association Codes of Ethics of 2015 not to acquire items that were "wrongfully taken during a time of conflict" and also to deal "sensitively and promptly with requests for repatriation."