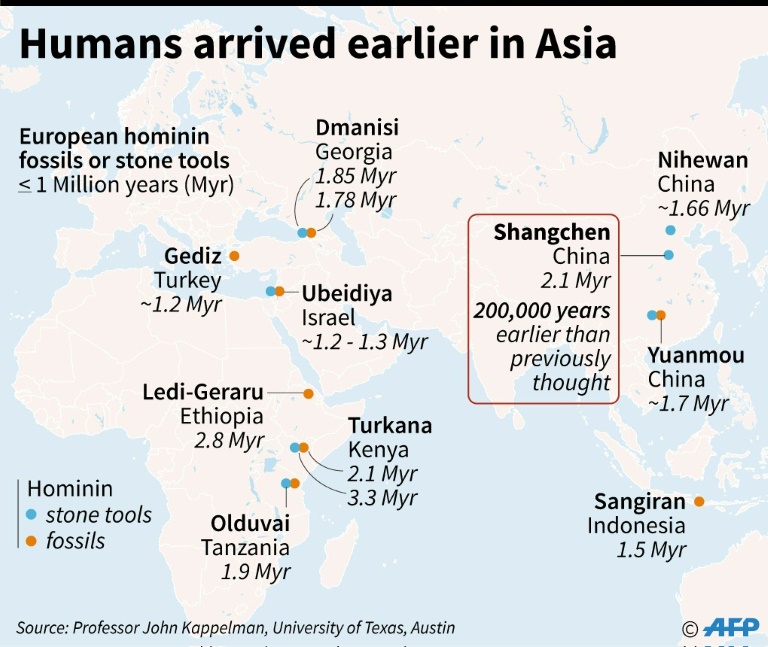 The remains of crudely fashioned stone tools unearthed in China advances the presence of human ancestors in Asia by around 200 millennia to 2.1 million years ago, scientists said Wednesday.

If correctly dated, the find means that hominins -- the group of humans and our extinct forefather species -- left Africa earlier than archaeologists have been able to demonstrate thus far, a team reported in the scientific journal Nature.

"Our discovery means that it is necessary now to reconsider the timing of when early humans left Africa," said study co-author Robin Dennell of Exeter University in England.

The first migrants were likely members of the species Homo erectus (upright man) or Homo ergaster (working man) -- extinct predecessors of our own group, Homo sapiens (wise man), which first emerged about 300,000 years ago.

The oldest known African fossil attributed to a member of the Homo family is a 2.8 million-year-old jawbone from Ethiopia.

Previously, the oldest evidence for hominins in Asia came from Georgia in the form of fossilised skeleton bits and artefacts dated to between 1.77 million and 1.85 million years ago.

There have been other, unproven, claims of even older fossil discoveries, the study authors said.

The latest find of 96 stone tools, mainly flakes made with rudimentary hammers and likely used for cutting meat and other food, was extracted from 17 layers of sediment in the southern Chinese Loess Plateau.

There were no hominin bones.

Dennell and a team used a field of science known as "palaeomagnetism" to date the sediment layers. These form when dust or mud settles before being capped by another new soil coat.

Any artefact found within a layer would be the same age as the soil around it.

Palaeomagnetism relies on shifts in the Earth's magnetic field, the historic dates of which are well known to scientists.

Dennell and a team measured the magnetic properties of minerals in the soil layers to determine when they were deposited.

This dated the tools, of a type known to have been manufactured by Homo species in Africa since at least 3.3 million years ago.

The paper offers strong evidence for a hominin presence in Asia further back than we thought, Dennell said.

"There may be older evidence in places like India and Pakistan, but so far ... the evidence is not strong enough to convince most of the research community," he told AFP.

"With this type of claim, for an early human presence in a region, the evidence has to be absolutely water-tight and bomb-proof."

Who made the tools?

"Probably an early form of our own genus Homo," said Dennell, though further research is needed to pinpoint the species.