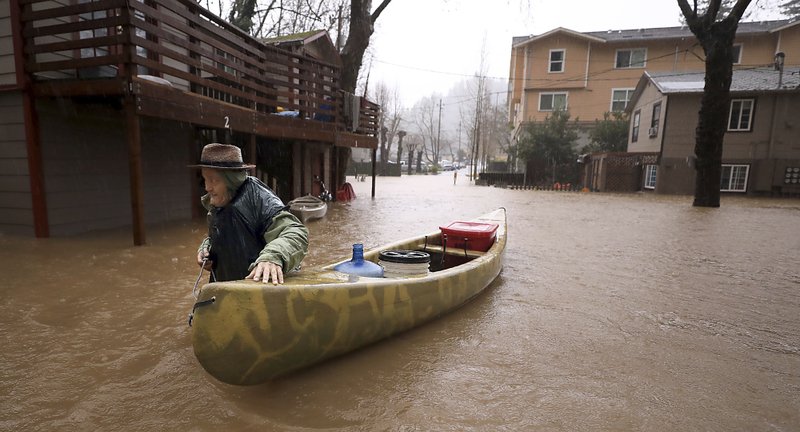 Two California communities north of San Francisco were accessible only by boat Wednesday after a rain-swollen river overflowed its banks and inundated low-lying areas around them overnight, authorities said.

One of them, the small city of Guerneville, “is officially an island,” the Sonoma County Sheriff’s Office said in a statement. A short time later, an official said the nearby town of Monte Rio was also isolated by floodwaters with all roads leading to it swamped.

The swollen Russian River was forecast to rise more throughout the day, engorged by days of rain from western U.S. storms that has also dumped heavy snow in the Sierra Nevada, throughout the Pacific Northwest and into Montana.

The Russian River topped 32 feet (9.8 meters) Tuesday evening and it could crest at more than 46 feet (14 meters) by Wednesday night, which would be its highest level in about 25 years.

About 4,000 residents of Guerneville and two dozen other communities along the river were ordered to evacuate Tuesday evening.

There also was concern about potential mudslides in hillside areas saturated from days of downpours, and in areas scarred by 2017 wildfires.

A mudslide Tuesday near Monte Rio trapped a man and a woman before they were rescued, messy but unharmed.

“I fell into the mud when the tree fell over the top of me. It happened so fast you don’t even know, you know?” Kear Koch told KGO-TV.

Elsewhere in the area, several people had to be rescued from cars stranded while motorists tried to drive through flooded roads, including a woman who was rescued by boat.

Firefighters in Monte Rio worked through the night pulling people out of cars stuck in flooded roadways and getting people out of their homes as water approached, Fire Chief Steve Baxman told the Press Democrat newspaper.

“We took 17 people out of cars and houses during the night. Too many people are driving into water,” he said.

Dee Rydberg on Tuesday removed computers and printers from her business, Guerneville Graphics and Printing.

“I could not afford to buy flood insurance,” she said. “So I’m packing up my stuff and getting out.”

Other waterways, including the Napa River, also were expected to overflow their banks as an ocean-spanning plume of moisture continued tracking through the West. Snow from the storms closed roads and schools and toppled trucks and trees from Oregon to Montana.

The National Weather Service also issued flood warnings and flash flood watches through Thursday morning for the San Francisco Bay Area and many parts of the Sacramento area.