When storyteller Sithar Dorje closes his eyes to start singing and narrating The Epic of King Gesar, he says he enters into another world where the king lives and he plays one of the fabled roles. 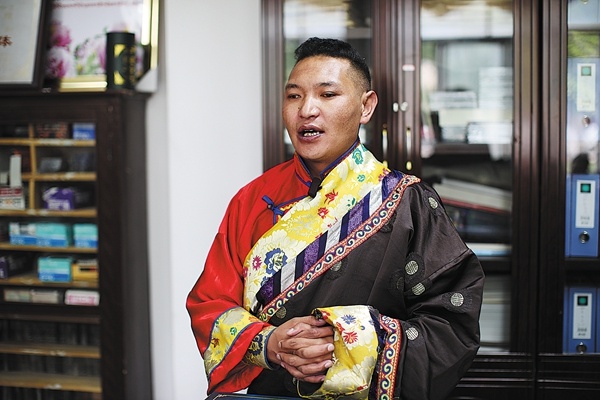 Storyteller Sithar Dorje sings and narrates The Epic of King Gesar at Tibet University in Lhasa. The masterpiece is hailed as an encyclopedia of ancient Tibetan society. (Photo provided to China Daily)

An inheritor of the Gesar epic tradition, which was inscribed on the UNESCO list of world intangible cultural heritage in 2009, Sithar Dorje works at the Gesar epic research center of Tibet University in Lhasa in the Tibet autonomous region. The storyteller and researcher tasks himself with the mission to preserve and spread the Gesar epic, a masterpiece that is regarded as an encyclopedia of ancient Tibetan society.

The longest epic in the world-dozens of times the length of Homer's Iliad, The Epic of King Gesar has been passed down orally through singers and storytellers on western China's Qinghai-Tibet Plateau. The legend of King Gesar can be traced back to the 11th century. It tells how the king, sent by god, banishes demons, helps the weak and unifies tribes.

"It's a kind of Tibetans" live history'. People living on the plateau used to learn their history from the Gesar epic," says Xu Guangzhi, director of the Tibetology institute of Tibet University.

Xu says because the epic has been mainly passed down orally, preserving the tradition is urgent as old storytellers are passing away.

In 1979, scholars from Tibet University set up a special team to record videos of a well-known storyteller Drakpa, who was already 72 years old. More than 1,000 hours of Drakpa's performing of the Gesar epic in his last eight years have been recorded and compiled into 26 books.

Most storytellers of The Epic of King Gesar can't read or write, such as the legendary singer Drakpa. They can recite for days the king's tales, for which many Tibetologists have not yet found a reasonable explanation.

Currently, there are a few storytellers performing in teahouses in Tibet, especially in nomadic areas. Most of them are old and not formally educated.

Sithar Dorje is the only one among the storytellers to obtain a master's degree. He says he learned narrating of the epic at the age of 9 after he had a long dream where he was led into the world of King Gesar.

"The dream changed my fate. From then on, I decided to become a storyteller," he says. His hometown is Palbar county in Chamdo city, the same with the legendary storyteller Drakpa.

As a teenager he was in demand from wedding hosts and party organizers to perform the epic.

Because of his talent in reciting the king's tales, Sithar Dorje has been funded by the region's government since middle school. He went to Tibet University in 2010, studying Tibetan history and literature. After graduation in 2014, he got a job at the Gesar epic research center in the Tibetology institute and furthered his study at the graduate school in Tibet University.

Currently, he records his performances several times a week and spends most of his time compiling recital episodes and doing research.

Sithar Dorje says the longest performance he ever offered was for a group of nomadic people and it lasted two days, with no sleep.

Although he and a few storytellers are performing the epic which includes hundreds of myths, folklores, ballads and proverbs, it's still hard to pass it to the younger generations when entertainment options in the internet age are more attractive and diversified.

In June last year, Sithar Dorje performed in a primary school in his hometown of Chamdo city, where the epic is taught.

"We're trying to spread it in primary schools. Three schools are cooperating with us and it is going well," he says.

Xu, director of the Tibetology institute, says because the narrative is so vast and different storytellers have their own style, the compiling and translation work is huge. For the translation alone, 7 million yuan ($1.08 million) has been invested since 2006, part of the central government's 200 million yuan investment in the region's intangible cultural heritage protection, according to a government report issued in May.

"Although it's a tough and huge project, we, together with the storytellers, will make our efforts to protect and spread the heroic Tibetan epic," says Xu.