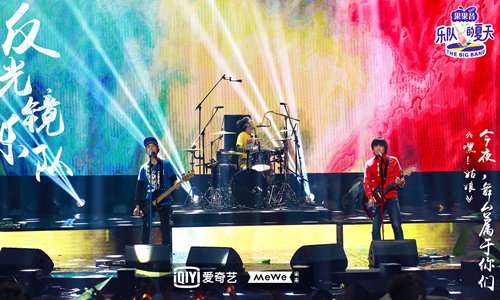 Reflector performs on The Big Band on Saturday. (Photo: Courtesy of iQiyi)

Debuting during the late 1980s, Chinese rock'n'roll pioneers The Face are regarded as representative figures in the music genre in China. When lead singer Chen Hui cried out "We are The Face" on iQiyi's music program The Big Band to the heavy beat of drums on Saturday, they clearly demonstrated why they earned their unique standing as a strong and distinguished rock band. Performing in live houses and different music festivals, The Face decided to throw their hat in the ring to compete against another 30 Chinese bands on the new iQiyi program, which will select five final winners at the end. The hashtag for The Big Band has been used in 1.49 million posts and viewed 370 million times on China's twitter-like Sina Weibo.Exploring the spirit of musicCompetition looks to be fierce as there are many famous Chinese rock'n'roll bands taking part in the show. Some have established their fame gradually over decades, like punk band Reflector and the rock band New Pants, while others are quite new but already have considerable fan bases. For example, debuting in 2012, Penicillin stands out due to their passion for British rock. In addition to rock, the show also includes other genres such as ballads and electronic music. During the planning stages for the show, the producers were worried that the rockers, often thought of as being rebellious and independent, would not be interested in taking part since the competition system seemed to contradict with bands' culture of freedom. The system to determine the final winners includes a judge panel made up of 100 people selected from the audience, music critics and six celebrities. Each episode bands will perform and those with the highest scores will move on to the next round. Surprisingly, persuading the rock bands to join in turned out to be much easier than expected. At a media event before the premiere of the show, one of the program's producers Ma Dong said they found that the band members are a bunch of very interesting people and that the emerging young bands represent a way of life that breaks from the stereotype of rockers as rebels arising from poverty. Ma noted that in addition to introducing original pieces of music to audiences, he also wants to present audiences with the stories and musical spirit of these bands.  On the first episode of the program, renowned Chinese music producer Zhang Yadong, who acted like a "super fan" on the episode, noted that bands should be made up of people who hold strong opinions, such as "you either like my music, or my music is none of your business." Meanwhile, China's earliest popular musician and culture critic Gao Xiaosong compared the eagerness of forming a band to having a girlfriend, although he noted that many band members would rather give up on romance in order to stay together. Staying true to rock The night was filled with interesting contradictions. For instance, Gao teased the members of Reflector by joking how odd it was to see punk music, often associated with young rebels, being played by a bunch of middle-aged men, while also noting that younger bands were sticking to more classic rock styles. Reflector officially came together in 1997. On the program, the band's singer and guitarist Li Peng said he still remembers clearly how they had to draw the posters for their concerts, print them out and distribute them all on their own. They also recorded cassettes and made T-shirts that they sold at foreign language institutes or in front of the dorms where the foreign students resided. "Chinese punk rock band. T-shirt just 15 yuan [$2], man," Li said, recalling his sales pitch from 20 years ago.  Reflector got a very high score of 148 at the end of their performance, but the older rock band The Face was not so lucky. Although The Face startled and amazed the many professional musicians on the panel, their score was just 126. Prior to taking the stage that night, a pre-recorded video was played in which the band's bassist Ou Yang said that the power of rock'n'roll still remains with them because they have continued to play over the years,and that the reason they decided to come on the program was to show their fans and the wider audience what The Face was like today.The Face performed their classic song Dream, invoking viewers' memories of the rise of rock in China. When rock was in its heyday in the country during the early 1990s, a few rockers had a great influence on popular Chinese music. These legends include Cui Jian, Dou Wei and Zhang Chu. Penicillin's performed their song "A Rainy Night in Manchester," which was praised by Gao. The lyrics of the song are English and Gao pointed out some grammar mistakes in the lyrics and suggested they change one word. However, vocalist Xiaole refused to do so, saying "if I change my song to suit someone else's opinion, then it's not ours anymore."