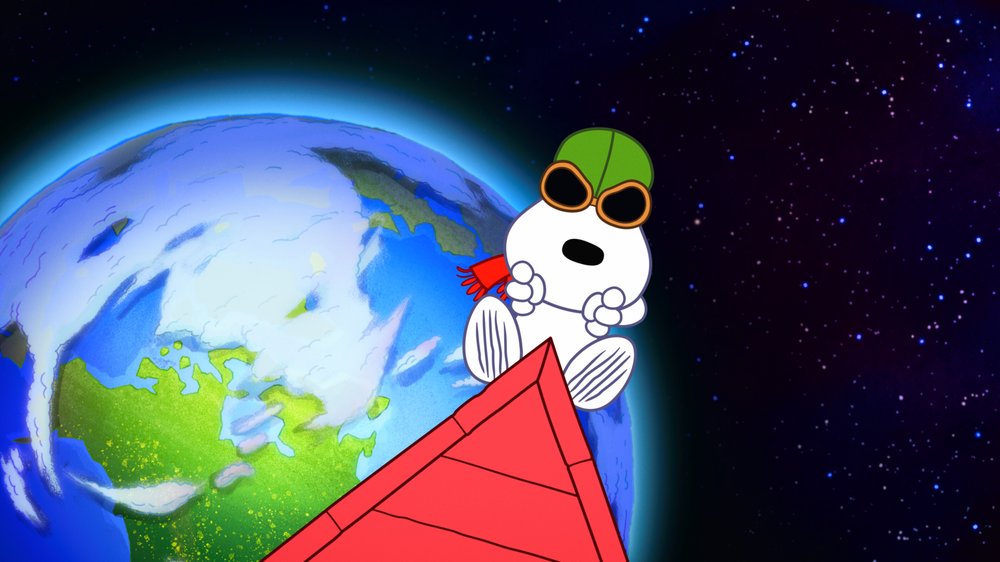 This image released by Apple shows the character Snoopy in a scene from an animated short "Snoopy in Space."  (Photo: Apple)

When Apple was thinking about what kind of children’s TV programming it wanted on its new streaming service, it doubled down on two multi-generational crowd-pleasers — Snoopy and “Sesame Street.”

Apple TV Plus has carved out prominent roles for Charlie Brown’s floppy-eared beagle and for puppets from the famed Sesame Workshop in its slate of kid and family-friendly programs.

“Both Snoopy and Sesame Workshop are crown jewels of the last decades in what family entertainment looks like. There’s a reason that we went proactively to those two entities,” said Zack Van Amburg, who is Apple’s head of worldwide video alongside Jamie Erlicht.

The decision to use existing children’s icons as the bedrock for the fledgling platform is one shared by several other streaming services, often with one eye on looming Netflix, the world’s largest streamer with an arsenal of titles attracting kids and families.

The services are competing for kids’ eyeballs not only from each other but also from shows on YouTube and traditional broadcast channels. Often the safest way forward is piggybacking on established titles that parents already know from their childhood and leaning into the nostalgia.

Amazon Prime Video has rebooted “ Clifford the Big Red Dog ” and has original shows featuring Kung-Fu Panda, Pete the Cat, and Rocky and Bullwinkle. CBS All Access has series built on the classic book “Cloudy With a Chance of Meatballs” and the classic ’toon “Danger Mouse.”

Disney Plus is offering shorts starring Forky from “Toy Story 4” and a reboot of the Hilary Duff-led “Lizzie McGuire,” another show built around Phineas & Ferb, plus a new series based on Marvel Comics’ “The Falcon and the Winter Soldier.” And, yes, it, too, has Muppets — the unscripted series “Muppets Now.”

Netflix has embraced shows built around Captain Underpants, “Lost in Space,” the book “Green Eggs and Ham,” the comic book “Raising Dion” and even a youth-orientated “Fast and Furious” series.

Brian Wright, vice president of original series at Netflix, said its creators are hoping to craft content that allows a family to have a shared experience and a shared conversation — wherever that family is.

“We really want to be in the space of building really appealing worlds that have something for everybody,” he said. “One thing that we talk a lot about is reflecting the world back at itself. We want to break down the barriers of who gets to be seen and represented.”

Apple TV Plus subscribers may not get as many shows as Netflix but executives are building a carefully curated list, including a dozen 8-minute “Snoopy in Space” animated shorts, as well as the brand new upcoming series “The Snoopy Show,” with each installment featuring three seven-minute cartoons starring the Peanuts crew.

They’ll also get two series from Sesame: the live-action preschool-aimed “Helpsters,” which mixes human actors and puppets, including Cody, a new puppet that loves computer coding. And there’s “Ghostwriter,” a live-action fantasy series that re-imagines the Sesame Workshop’s 1992 series.

The streamer will also have the original animated special “Here We Are” based on lauded author Oliver Jeffers’ book, the animated series “Wolfboy and the Everything Factory,” the live-action animated hybrid “Lovely Little Farm” and a pair of animated series based on the children’s books “Doug Unplugged” (rebranded for TV “Doug Unplugs”) and “Zen Shorts” (called “Stillwater” for TV).

“When you look at the breadth of programming, I think you’ll see a mix of established book properties, reboots of television shows, but also new properties from diverse creators,” said Tara Sorensen, Apple’s head of children’s programming. “Apple as a whole believes in great storytelling and so we want to make sure we represent that across our slate.”

Van Amburg and Sorensen said that what makes Apple TV Plus distinctive from some of the others is a commitment to education and imparting lessons. “We want to make sure parents feel good about watching these programs together as a family but also putting their kids in front of them solo,” said Sorensen.

“I think entertainment in kids’ programming can be purely that — it can be thoughtful and entertaining,” said Van Amburg. “But we said, ‘What if we pushed a little bit further? What if there was actually a message, what if there was a take-away? What if this was a really safe place for kids and families to come and be entertained but actually become somewhat enlightened?’”

Still to come are plans for kids’ programming from NBC’s upcoming Peacock service, as well as HBO Max. But not everyone is watching the explosion in streaming content uncritically. The Center for Digital Democracy is as wary of streaming content as it is of the Wild West of YouTube videos aimed at kids.

“It’s all about getting their attention so ads can be sold,” said Jeff Chester, the center’s executive director. “The global brands, such as ‘Sesame,’ ‘Clifford’ and others, use YouTube as a way to promote licensed content to sell their own and sponsored videos and branded merchandise.”