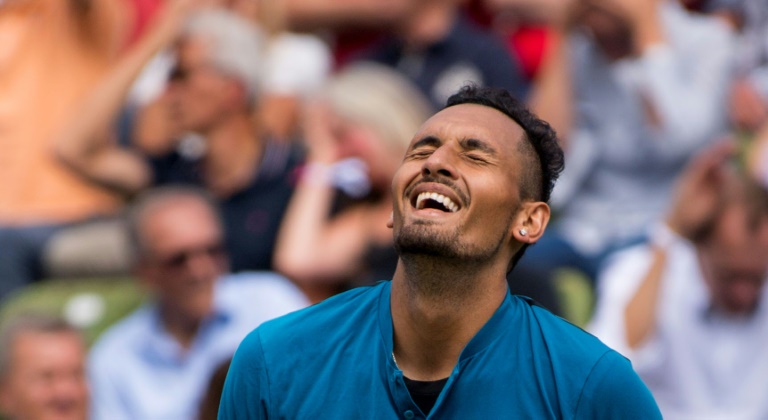 Australia's Nick Kyrgios reacts after a point against Maximilian Marterer as he toughed out a three-set win in what he called "a terrible match" （Photo: AFP）

Australian struggler Nick Kyrgios turned in what he called a "terrible" performance but still got past Maximilian Marterer 6-4, 4-6, 6-3 on Thursday at the Stuttgart Cup.

"It was a terrible match, the only thing that kept me in it was my serving," the fourth seed said after playing his first singles match in two months and firing 20 aces to take the win.

"Nothing went very well for me, the good thing is my elbow didn't bother me," said the player whose solid start to the season (Brisbane title) has been compromised by injuries to his elbow and hip.

"Basically, I didn't feel great out there, today was pretty average. And the last three months have been brutal."

Kyrgios will try to work his way into further form in the quarter-finals when he plays Feliciano Lopez, the grass-loving Spaniard who knocked out Frenchman Gilles Simon 7-6 (8/6), 6-4.

Number 24 Kyrgios and the 50th-ranked Marterer combined for 38 aces on the grass of the Weissenhof Club as the sun shone consistently for the first time this week.

The Aussie is hoping to work his way back into shape after dealing with his run of injuries.

Memories remain fresh of his 2017 grass misfortunes in Britain when Kyrgios was forced to retired injured in opening matches at both Queen's Club and Wimbledon.

"Last year was an absolute disaster," he said. "But I have three weeks now to get ready for Wimbledon. Hopefully I'll get better.

"If I lose early again, I'll be shattered."

Despite his sloppy success over Marterer, Kyrgios takes away some confidence after finally getting back onto court.

"I'm pleased to have won, I feel good about that, I have to take the positives. It's been frustrating being on the road, going to all of these tournaments and not being able to play."

Federer can regain the top world ranking from Rafael Nadal if he reaches the Stuttgart final.