Students enthusiastically seek to acquire one of China's most endangered languages 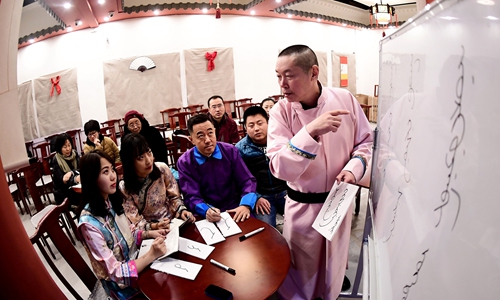 Fu, in his late 50s, holds Manchu language classes every Saturday at a museum in Shenyang, aiming to save the language. His vision is the preservation of Manchu language, culture, and customs for future generations.

Created in the 16th century, Manchu language was one of the official languages of the Qing Dynasty (1644-1911) together with Han language, Mongolian language and Tibetan language.

There are 15 languages in China that are spoken only by 100 to 1,000 people. The Manchu language is one of them, Sun Hongkai, an expert on Sino-Tibetan languages at the Chinese Academy of Social Sciences, told the Xinhua News Agency.

Sun has conducted language investigations in the field for more than 60 years.

According to an article published in the November issue of the Journal of Changchun Normal University, only a few people can understand and speak Manchu language out of tens of millions of Manchu people in China. Manchu language is spoken only by some seniors in several Manchu villages in Northeast China's Heilongjiang Province; some language experts can understand written Manchu language.

The number of people who learn and try to master the endangered language is increasing.

However, in the three provinces in Northeast China where Manchu language is natively spoken, less than 10 people are involved with teaching, translating and researching the language, according to the article.