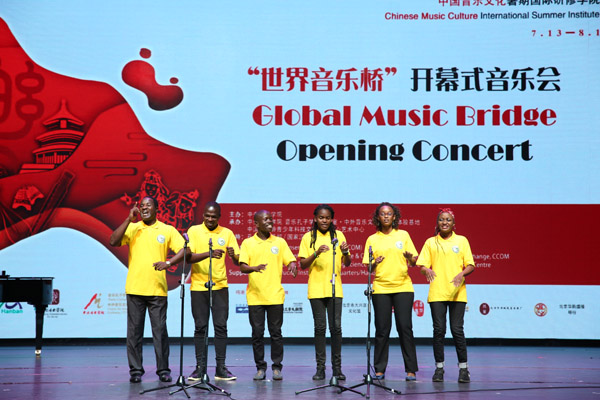 College students from the University of Nairobi, Kenya, perform at the opening concert of a 20-day study program being held in Beijing for young foreign musicians to learn more about Chinese music. (Photo provided to China Daily)

More than 50 teachers and students from eight music conservatories and art schools from five countries－including the United States, Canada and Kenya－gathered in Beijing on July 14 to perform repertoires such as Franz Liszt's Spanish Rhapsody, Olivier Messiaen's Cluck Old Hen and the premiere of A Song in the Wild by Chinese composer Gong Zihan.

The concert kicked off the 2018 "Understanding China Through Music" Chinese Music Culture International Summer Institute, a 20-day study program aimed at promoting Chinese music and cultural exchanges among young students and teachers from around the world.

Hosted by the Central Conservatory of Music, the program of music study and academic research consists of six sections, including learning how to play traditional Chinese musical instruments and compose original music pieces.

Music experts from around the world will hold workshops during the program, including Du Mingxin, a senior professor at the conservatory and Wang Xiaoyan, an associate professor at the National Academy of Chinese Theater Arts.

According to Liu Yuening, yangqin (a Chinese dulcimer) player and a professor at the conservatory, who heads the program, over the past four years since the program's establishment, 166 music-majored teachers and students from eight countries have visited China.

Dennis Friesen-Carper, a professor at Valparaiso University in the US, where he teaches composition, conducts the school's symphony and produces oratorio and theatrical works, was invited by his longtime friend Liu to the program for the first time this year. At the closing concert on July 29, he will lead foreign students as they play Chinese musical instruments, such as the erhu, a traditional two-stringed fiddle, the lute-like pipa and the sheng, a free-reed woodwind instrument. The piece they will perform, Ode to the South, was composed by Zhu Yi.

Liu says that the selection of participants was based on music-majored university students from around the world who are interested in Chinese music. The candidates were recommended by Confucius Institutes worldwide.

"We want to provide young musicians who are interested in spreading Chinese musical culture in their own countries with opportunities to further study Chinese music and become foreign ambassadors for the genre," she explains.

She adds that, besides teaching students to play traditional Chinese musical instruments, the program also allows students to catch a glimpse of contemporary China.

By learning the techniques of playing the instruments, the students will be encouraged to compose their own musical pieces.

Liu says that this year, Chinese folk music will form a major part of the summer program and veteran musicians in the field will be invited to give lectures to the students.

"Each piece contains rich Chinese history and culture. Students learn knowledge beyond the music itself. Then, they will have their own understanding about China and compose their own unique sounds," Liu says.

Megan Hill, a PhD graduate in ethnomusicology at the University of Michigan, participated in the first summer camp at the Central Conservatory of Music in Beijing in July of 2014.

The camp offered a program of lessons on playing and performing with Chinese instruments, as well as seminars on modern Chinese musical practices－including the guqin (seven-stringed zither), contemporary classical composition and Peking Opera.

"Upon arriving, I didn't know what to expect, but in the ensuing days I learned about ancient Chinese musical instruments and how to ultimately perform Chinese folk songs in front of a large audience," recalls Hill.

"This experience was transformative and inspiring. It has ignited within us questions, visions and directions for future research in music creation through a continued relationship with a country we feel we have only just begun to know."

This year, Hill returned to the summer program as a music researcher.

Like Hill, Canadian student Matthew Devost from Carleton University, who participated in the program in 2016 and 2017, returned to the capital.

"It was truly a tremendous educational and cultural experience," says Devost in Beijing. "I played musical instruments that I had never played before. I also made lots of new friends with student delegations from universities around the world."