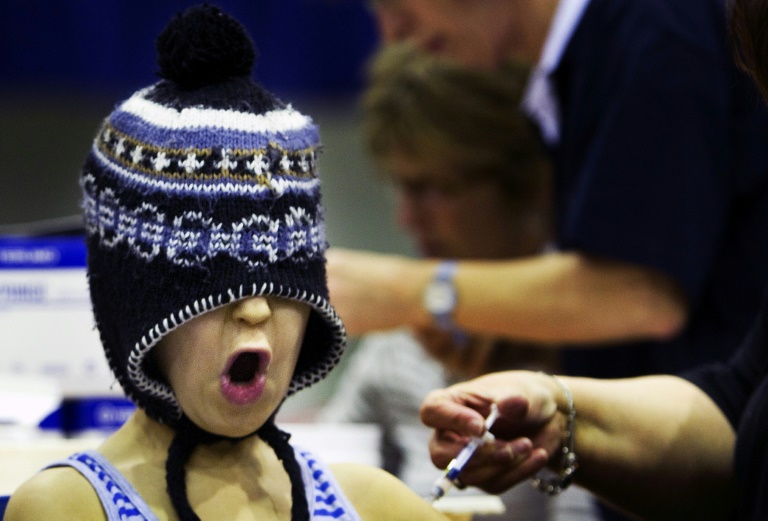 Vaccination against measles should be mandatory for children before they start school in order to prevent future outbreaks of the resurgent disease, according to new analysis released Friday.

The World Health Organization says cases of measles -- a highly contagious viral infection that causes rashes and fever that can prove fatal -- surged 300 percent in 2018.

Despite a widely effective, almost universally available vaccine costing pennies, more and more parents are willingly putting their children in harm's way due in part to a fraudulent scientific paper published over 20 years ago that subsequently fed conspiracy theories about plots to spread the disease.

They found that in nearly all countries surveyed, current immunisation programmes will be insufficient to maintain "safe" levels of immunity among populations.

The WHO says the number of unvaccinated individuals in a given country should not exceed 6-8 percent of the population in order to avoid widespread outbreaks.

"This is a complex phenomenon and it may have various causes depending on the region," Trentini told journalists.

"In high-income countries, for example, it may be attributable to vaccine resistance and to the clustering of unvaccinated people in specific groups of the population."

Under current vaccination programmes, the study found that Britain, the United States, Ireland, Australia and Italy would surpass safe levels of people susceptible to measles by 2050.

Indeed, the models showed that the proportion of unvaccinated people in Italy -- home to several recent outbreaks -- may already be over the 7.5 percent "safety" threshold.

In Britain the unvaccinated rate of 3.7 percent was expected to rise to 8 percent by mid-century under the current national approach.

"The results suggest routine programmes with current coverage levels are not enough to maintain the high immunity level required in the next decades."

The authors of the study, published in the journal BMC Medicine, stressed however that mandatory vaccinations of school children -- such as has been implemented in France and Italy in recent years -- would only be effective in conjunction with better public health awareness.

"There are some immunity gaps in Europe among adults," said Piero Poletti, report co-author.

"These countries would certainly benefit from the introduction of vaccinations at school entry on top of current immunisation programmes."

Sonia Saxena, professor of primary care at Imperial College London, welcomed the research but cautioned that mandatory vaccinations might have "unintended consequences".

"It risks disenfranchising parents and carers, as well as risking a rise in unvaccinated children being excluded from school," she said.

"The most important message for parents is that for (the measles vaccine), two doses by age 2 is the thing to remember. If everyone did this they would protect their child and also the whole community from outbreaks of measles," added Saxena, who was not involved in the study.