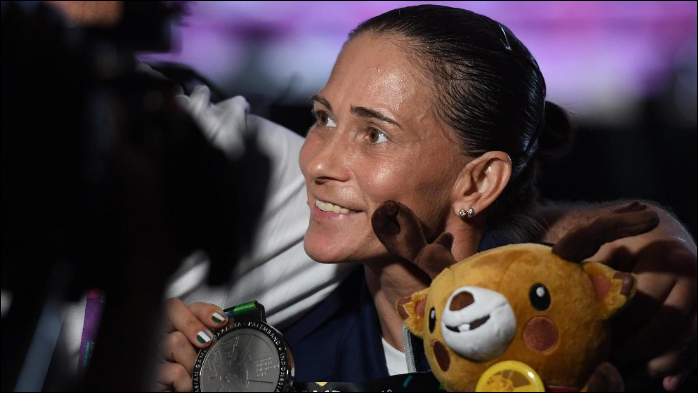 Seven-time Olympic gymnast Oksana Chusovitina has taken the silver medal in the vault at the Asian Games.

The 43-year-old from Uzbekistan missed the gold medal by one-tenth of a point. She has already said she expects to compete in Tokyo for her eighth Olympics at 45.

Chusovitina competed in her first Olympics in Barcelona in 1992, where she won the team event for her only Olympic gold medal.

Yeo Seojeong of South Korea, who is 16, took the gold and the bronze medal went to Pyon Rye Yong of the Democratic People's Republic of Korea.

Despite her extensive fan base Chusovitina said she has no family watching her in the crowd, although her 18-year-old son Alisha is following the competition at home in Germany and calls her every day.

Chusovitina's extraordinary career saw her first competing for the Soviet Union in the 1980s, before she went to the Barcelona Games for the Confederation of Independent States -- a unified team of former Soviet states -- where she won gold.

By the time the 2008 Olympics in Beijing, she had switched to Germany after moving there to get treatment for Alisha, who was suffering from leukaemia.