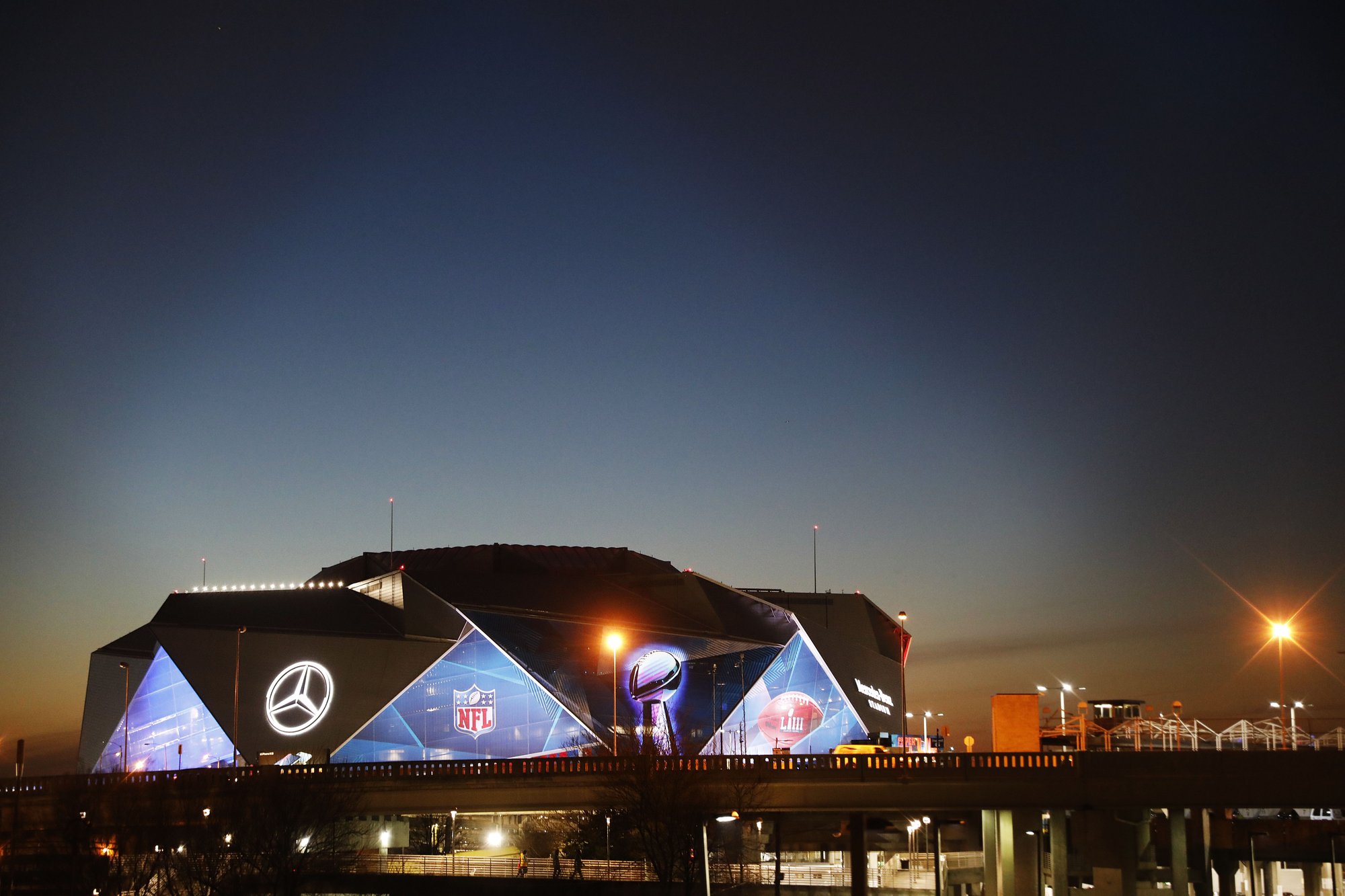 The previous time the Rams played in a Super Bowl, the opponent was New England. It didn’t work out so well for the then-St. Louis team.

The Patriots, of course, have made a habit of being in the NFL championship game — this is their eighth since that 2002 victory over the Greatest Show On Turf.

Here’s how they’ll match up in Atlanta:

WHEN NEW ENGLAND HAS THE BALL

Thanks to a dominating line led by LT Trent Brown (77), C David Andrews (60) and RG Shaq Mason (69), Tom Brady (12) barely was touched and never was sacked by Kansas City in the AFC title game. And the Chiefs led the league in sacks. If that group can be just as stout against All-Pro DT Aaron Donald, the only unanimous choice for the squad, Ndamukong Suh (93) and Michael Brockers (90), Brady could have another one of his MVP performances. However, the secondary he’ll face this time is far superior to what the Chiefs put on the field, particularly with cornerbacks Aqib Talib (21) and Marcus Peters (22) — and backup Nickell Robey-Coleman (23), he of the now-infamous helmet-hit pass interference non-call against the Saints.

Those two must be aggressive at the line of scrimmage against WRs Julian Edelman (11) and Chris Hogan (15), who were so open on some routes against Kansas City it looked like a passing drill.

The other intriguing matchup here is TE Rob Gronkowski (87) against safeties Lamarcus Joyner (20) and John Johnson III (43), who are physical enough to deal with Gronk, but it’s a wearying and thankless task.

And there’s this for LA to deal with: Rookie Sony Michel (26) has become a ground force with his power and instincts. Fellow RB James White (28) is one of the best receivers out of the backfield in the league, and third-stringer Rex Burkhead (34) scored twice, including the winning TD for the AFC crown.

Rams defensive coordinator Wade Phillips will challenge Brady with his schemes, but LA must disrupt the QB’s timing and comfort zone. Brady’s O-line has to prevent that.

WHEN LOS ANGELES HAS THE BALL

Michel’s former teammate at Georgia, All-Pro RB Todd Gurley (30), has been battling knee issues. While late-season pickup C.J. Anderson (35) has been masterful, the Rams need a healthy and productive Gurley for the Super Bowl. At least he’s had extra time to heal.

Gurley led the NFL with 21 TDs and ranked fourth with 1,831 yards from scrimmage. He’d be a handful as a receiver for Patriots LBs Dont’a Hightower (54) and Kyle Van Noy (53), who comes off a superb outing in Kansas City. So one of the DBs, perhaps safeties Devin McCourty (32) or Patrick Chung (23), could get some assignments.

The Rams want to have balance on offense, and they certainly have the options in the passing game with Jared Goff (16) throwing to WRs Robert Woods (17), Brandin Cooks (12) and rapidly developing Josh Reynolds (83). Cooks will be eager for a big game after the Patriots dealt him to LA last offseason. He’ll likely see plenty of All-Pro CB Stephon Gilmore, who struggled a bit in KC.

New England managed four sacks of Patrick Mahomes and the Rams can’t be that generous if they expect to carry off the Lombardi Trophy. Steady linemen LT Andrew Whitworth (77), LG Rodger Saffold (76) and RT Rob Havenstein (79) must hold their own against DE Trey Flowers (98), Van Noy and the guys on the interior for New England.

Goff vs. Brady would seem a mismatch. But Goff and his team beat Drew Brees for the NFC title.

What more can Greg The Leg do? Well, LA placekicker Greg Zuerlein (4) could follow his clutch work in the Big Easy with a Super Bowl-winning boot.

Rams P Johnny Hekker (6) converted a fake punt for a first down at New Orleans and has one of the most powerful legs in the league.

The Rams aren’t exceptional on returns, but they aren’t inept, either. JoJo Natson (19) has handled most of the punt runbacks, while Blake Countess (24) is the kick returner.

The Patriots are more likely to break something in the return game with Cordarrelle Patterson (84) on kickoffs. New England features the usually reliable Edelman on punts, although he did — or didn’t — fumble one against the Chiefs.

Stephen Gostkowski (3) has made more pressure attempts than nearly any current NFL placekicker this side of record-setter Adam Vinatieri, and Ryan Allen (6) does a solid job punting.

Seeing how the Patriots dominated the Chiefs early on both sides of the ball, OC Josh McDaniels and unofficial DC Brian Flores had a superb game plan. But KC began moving the ball almost at will in the second half, and the Rams are capable of the same. That makes for a key question: Can LA slow down the precision passing and powerful/slashing running of Michel?

LA coach Sean McVay is the hot commodity on the pro football market. Every team looking for a new head coach has at least investigated people who’ve worked with McVay, who just turned 33. He’s innovative, aggressive and, in some ways, one of the guys, something New England’s Bill Belichick most definitely isn’t.

The Patriots are so experienced in this environment. Nothing that happens in Atlanta during Super Bowl week is likely to bother them. Same thing probably will apply when they get on the Mercedes-Benz Stadium field.

Brady, 41, will be the oldest starting QB in Super Bowl history. A sixth title would tie the Patriots with the Steelers for most in the Super Bowl era.

The Rams could energize the Los Angeles area about the NFL with a championship just three seasons into their return to Hollywood. They won the Super Bowl once, but representing St. Louis in the 2000 game.