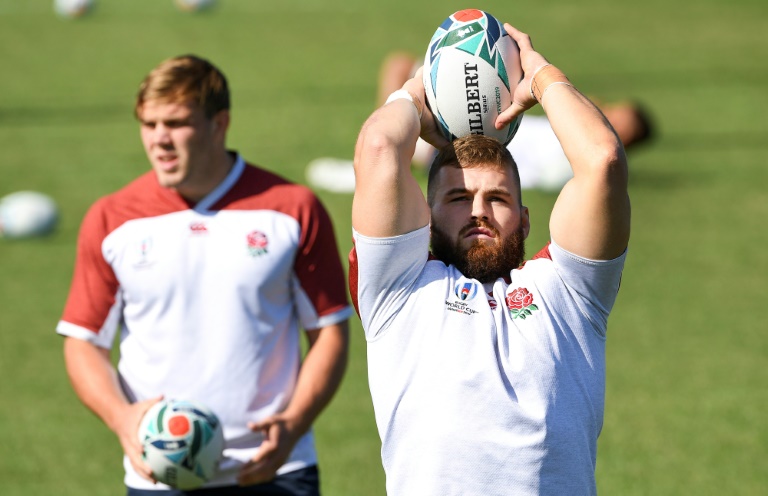 It is the first time in the tournament's 32-year history that a game has been cancelled. (Photo: AFP)

Two Rugby World Cup matches were cancelled in an unprecedented move on Thursday as Japan braces for potential damage and disruption from powerful Super Typhoon Hagibis.

The storm covers an unusually wide area and is currently rated as "violent", the highest level on the Japanese scale, packing maximum gusts of up to 270 kilometres (168 miles).

"While it's regrettable, we've made, we believe, the right decision with everyone's safety as the priority," tournament organiser Alan Gilpin told reporters.

The cancellations highlight the risks of holding a major sporting event in Japan -- which is prone to typhoons, earthquakes and volcanoes -- just nine months before the Tokyo 2020 Olympics.

And the decision affects tens of thousands of fans, many of whom had travelled from Europe to watch the crunch England-France match in Yokohama, just south of Tokyo.

Simon Learey, a British fan, told AFP he had flown in for the game after getting the tickets as a birthday present.

The cancelled games are recorded as 0-0 draws, means all four teams get two points. England go through as Pool C winners with France as runners-up, but Italy's slim chance of qualifying disappeared.

"It is a hard day for all of us and difficult to put into words," said Italy coach Conor O'Shea.

England's outspoken coach Eddie Jones however was more upbeat, as his side gifted more rest days before their quarter-final.

"So someone is smiling on us -- the typhoon gods maybe?"

All eyes are now on Sunday's showdown fixture between Scotland and Japan, which the Scots must win to have a hope of qualifying.

Organisers say they will see what damage Hagibis has caused before deciding whether that game, also in Yokohama, can go ahead.

The Scots, unsurprisingly, pressed organisers to find a solution, saying they "fully expect contingency plans to be put in place to enable Scotland to contest for a place in the quarter-finals".

Japan's weather agency warned that Hagibis was currently "a large and violent typhoon" and while it will weaken before hitting the mainland, it will "remain very strong" and have a "significant impact over large areas".

The impact on travel was already being felt with Japanese airline ANA scrapping 370 domestic flights to and from Tokyo's two main airports on Saturday.

Many people in Chiba, east of Tokyo, are still recovering from Typhoon Faxai, which struck Japan in early September and caused widespread disruption, leaving two people dead and cutting power to half-a-million homes.

Hagibis is taking a similar trajectory to Faxai but is nearly three times bigger in terms of area.

Organisers received criticism for the cancellations, with former World Cup winner Francois Pienaar telling Sky Sports: "Everybody has worked so hard. Why, if you work that hard and prepare yourself, let weather influence the outcome of the match? It shouldn't."

Former England fly-half Stuart Barnes said organisers had shown "a reckless disregard for the reality of the times in which we live".

"Any sensible plan has to account for worst-case scenarios. If a deadly typhoon was considered too difficult to handle, the sport should have looked elsewhere for a home," he wrote in The Times.

But Gilpin stressed he had "no regrets at all" about bringing the World Cup to Japan, the first Asian country to host the tournament.

"I think what you've all seen over the last three weeks absolutely in every respect vindicates the right decision to be hosting a World Cup here in Japan," he said.

He added that World Rugby had looked "pretty exhaustively" at other options for the games, including switching venues, but "we couldn't guarantee consistent contingency plans across all those games safely for all the teams and fans involved".

Meanwhile, organisers of the Japanese Grand Prix due on Sunday said they would delay any decision to postpone Saturday qualifying for another 24 hours, but pledged that the safety of fans and drivers was their top priority.

In 2014, Marussia driver Jules Bianchi crashed in bad weather conditions caused by a typhoon, and remained in a coma until his death the following July.