The Latest on the Alpine skiing world championships (all times local):
1:40 p.m.
Aksel Lund Svindal has come down in second place behind Norwegian teammate Kjetil Jansrud after the final run of his career. 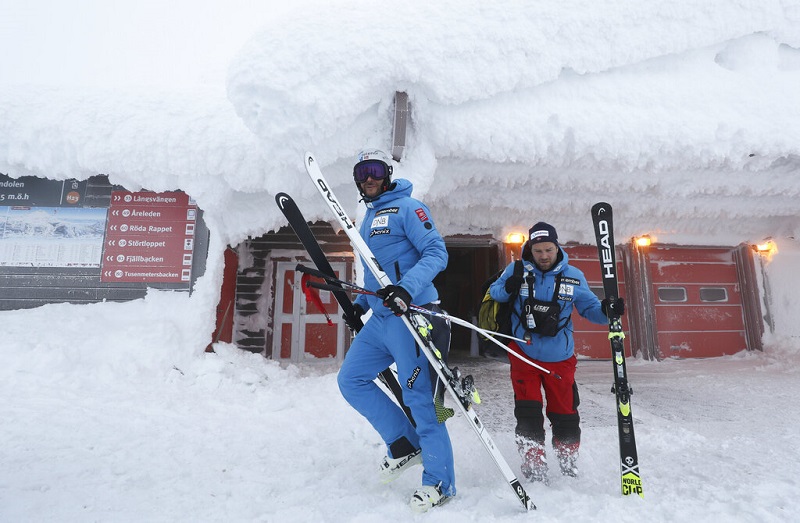 Norway's Aksel Lund Svindal inspects the course prior to the start of the men's downhill at the alpine ski World Championships in Are, Sweden, Saturday, Feb.9, 2019. (Photos: AP)
Svindal was the eighth skier on course and will have to wait until the rest of the top-ranked racers come down to see his final result.
___
1:30 p.m.
The men's downhill has started after an hour's delay due to fog.
Adrien Theaux of France was the first skier on course amid heavy snowfall.
Visibility still looked poor on the upper portion of the course and lights were turned on along the lower section.
___
12:50 p.m.
Aksel Lund Svindal will have to wait even longer for the final race of his career.
The start of the men's downhill has been delayed by another half hour — until 1:30 p.m. (1230 GMT) — due to fog.
It is snowing heavily at the Swedish resort of Are.
___
12:25 p.m.
The start of the men's downhill has been delayed by a half hour until 1 p.m. (1200 GMT) due to fog.
About 10 centimeters (four inches) of snow fell on the course overnight and organizers were still clearing the course. Strong winds are also a factor.
The race is due to begin on a shortened course from the super-G start.
___
10:50 a.m.
Norwegian great Aksel Lund Svindal bids skiing goodbye in the downhill at the world championships on Saturday.
Norwegian fans, including Crown Prince Haakon and Crown Princess Mette-Marit, are traveling over the border to see Svindal race for the last time before he retires.
The two-time Olympic champion and five-time world champion is attempting to become the first man to win the downhill world title three times, following his gold medals in Are in 2007 and in Schladming, Austria, in 2013.
The race is scheduled to start at 12:30 p.m. (1130 GMT) on a shortened course due to overnight snowfall.