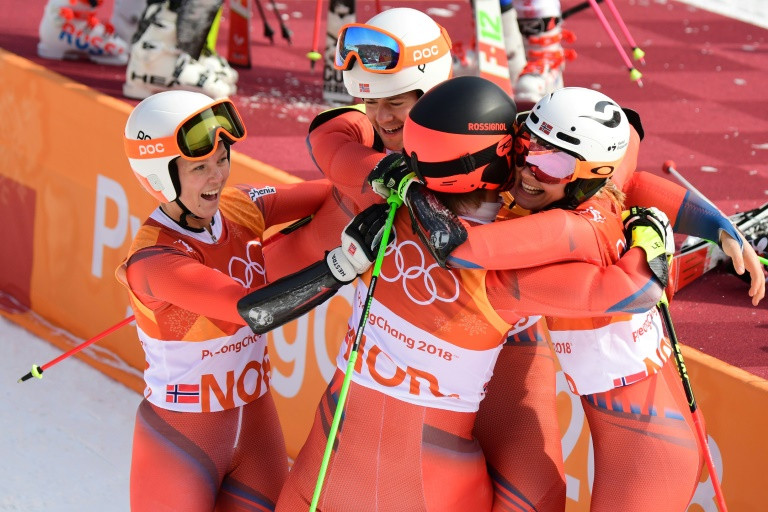 Wendy Holdener led a strong Switzerland team to alpine team skiing gold on Saturday, as Norway took bronze to set a new record of 38 medals at a Winter Olympics.

Switzerland won the final 3-1 against an Austrian quartet missing double gold medallist Marcel Hirscher for the inaugural title as the event made its debut.

Holdener and Zenhaeusern were both undefeated in racing at the Yongpyong Alpine Centre as the Swiss overcame Hungary, Germany and France on their run to the final.

Sweden had been fancied for a podium spot given they fielded individual slalom gold medallists Frida Hansdotter and Andre Myhrer, but they went down 3-1 to the Austrians in the quarter-finals.

Norway won bronze, Leif Kristian Nestvold-Haugen beating France's Clement Noel in the fourth and final run to win by a tie-breaking 0.12sec after two victories to each team.

It was a record 38th Winter Olympics medal for Norway, beating the record set by the United States in 2010. Norway and Germany top the medals table on 13 golds, although the Norwegians have more medals overall.

Alpine team skiing, in which racers of the same gender go head-to-head down a short 26-gate course, has been a fixture at the world championships for the last decade.

But the debut of the event at the Pyeongchang Olympics was hit by the withdrawal of a large number of leading skiers such as Hirscher and US star Mikaela Shiffrin.

They pointed at the poor scheduling of the event at the end of the Games, with competition on the World Cup circuit starting back in Europe next weekend.

There is no doubt, however, that the quickfire nature of the event is a draw for the public and a large number of racers.

"These are really fun events. It's great for TV, it's great for the crowd. I think it'll be a big sell in the future," said Nolan Kasper, whose Shiffrin and Ted Ligety-less US team was surprisingly beaten by Britain in the opening round-of-16.

Lindsey Vonn, who also skipped the event, said many skiers thought it wasn't worth the risk of injury.

"The reason most athletes don't want to do it is because they fear injury. There are quite a few people getting injured doing it and don't think it's worth the risk," Vonn said.

"I don't know the answer about what could make it more appealing for us. It's a tricky one."