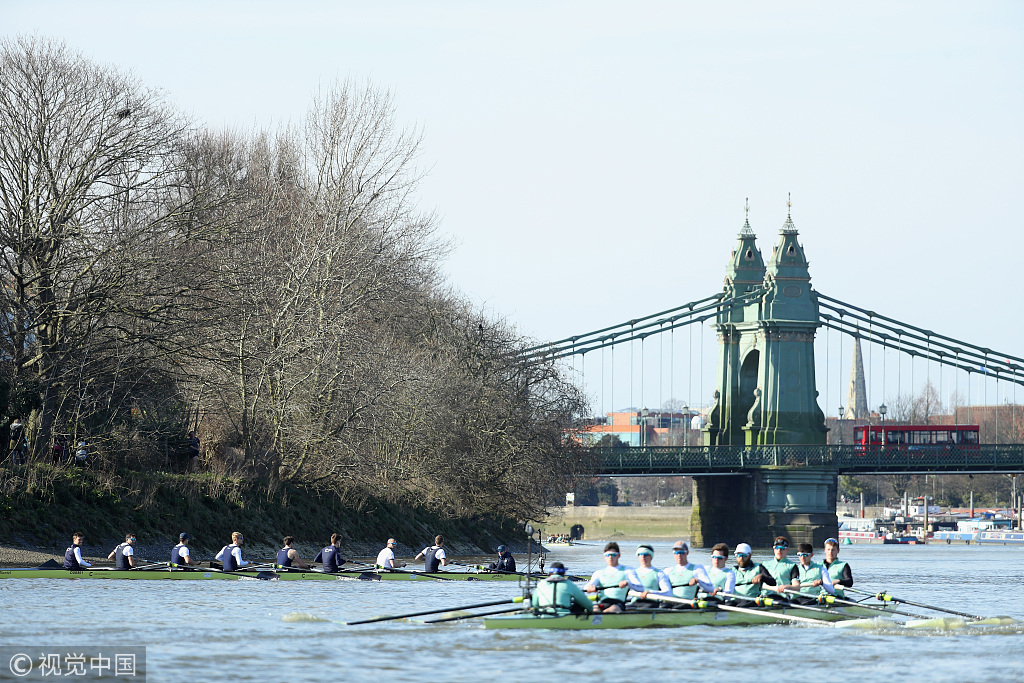 The Cambridge University Boat Club Blue crew is pictured on a training outing during Tideway Week, leading up to the 2018 Cancer Research UK Boat Races, March 21, 2018 in London. [Photo/VCG]

Cultural collaboration is key to future

Academics and business leaders gathered in London on Friday for a symposium on the future of UK-China collaborations.

The UK-China Dialogue on Future Academic and Industrial Collaboration in Creative Industries explored topics such as collaborations between Britain and China after the United Kingdom leaves the European Union, and future opportunities in the Chinese city of Shanghai.

Among the main speakers were Rong Yueming, dean of Institute of Literature at the Shanghai Academy of Social Sciences, and Professor Kerry Brown, director of the Lau China Institute at King’s College, London.

The event was also used to launch the book, Cultural Industries in Shanghai, edited by Rong and Justin O’Connor.

Rong said that by 2023, the annual output value of Shanghai's cultural industries will account for 15 percent of the city's total GDP.

“Shanghai will be built into an international creative industry center which brings huge international impact by 2035,” he added.

Xiang Xiaowei, the cultural counselor at the Chinese embassy to the UK, said the 40th anniversary of China’s reform and opening-up policy has provided an important platform for cultural cooperation with the rest of the world and a chance to promote exchanges.

He added although Britain and China have cultural differences, the two sides have an important influence on the development of art and culture worldwide.