Syndergaard to DL again due to hand-foot-and-mouth disease

NEW YORK (AP) — In the latest bizarre medical development for the baffling New York Mets, ace pitcher Noah Syndergaard is headed back to the disabled list after contracting hand-foot-and-mouth disease. 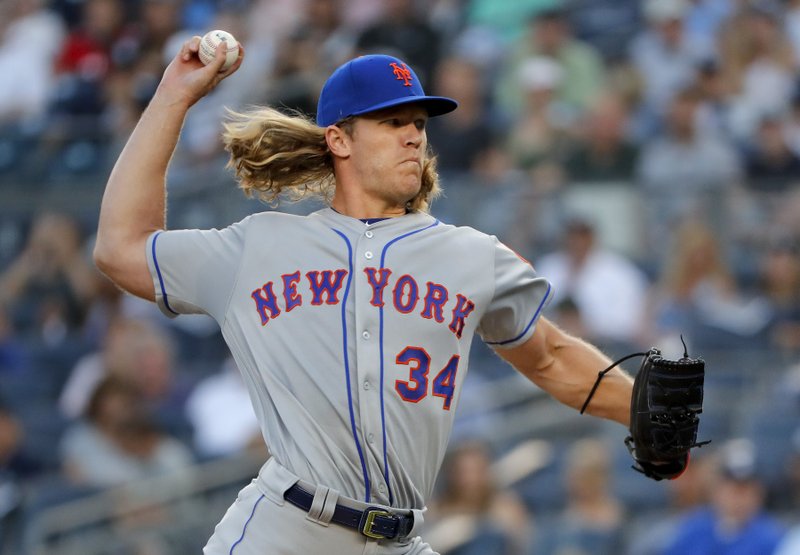 The team figures it’s likely Syndergaard caught the contagious virus when he made an appearance at a baseball camp for kids last Thursday during the All-Star break. Mets manager Mickey Callaway said that probably explains why Syndergaard weakened and his velocity decreased during Friday night’s victory at Yankee Stadium.

“Hand-foot-and-mouth, are you serious? I guess it’s very uncommon in adults, period,” Callaway said Sunday. “It’s kind of odd. Maybe the first DL stint in Major League Baseball with hand-foot-and-mouth? I don’t know. A record or something.”

According to WebMD.com, hand-foot-and-mouth disease is an infectious disease that “most often occurs in children under 10 and is characterized by a rash of small blister-like sores on the palms of the hands, soles of the feet, and in the mouth. Symptoms include fever, sore throat, and headache.”

The disease can spread from one person to another through saliva or fluid from blisters, among other things, and the infection normally passes in a week. The only treatment is a pain reliever such as acetaminophen, according to the website.

“It took its toll the other night. He had trouble breathing, and that’s why you saw his velo down,” Callaway said. “During the game, we couldn’t quite figure it out. But I put my hands on his legs to talk to him when he came out, and I felt his legs shaking. He was just weak and run down.”

Syndergaard, who missed most of last season with a torn lat muscle, just returned from the disabled list July 13 after being sidelined for more than six weeks with a strained ligament in his right index finger. He is 6-1 with a 2.89 ERA in 13 starts this year for the struggling Mets, who began the night last in the NL East.

Assistant general manager John Ricco said the pitcher will be placed on the 10-day DL again Monday. Syndergaard stayed home Sunday and Callaway said no other members of the team have shown symptoms of the disease.

“It’s not a long-term thing and hopefully he misses one start,” Ricco said.

New York initially planned to recall rookie right-hander Corey Oswalt from Triple-A Las Vegas to pitch in Syndergaard’s place Wednesday against his hometown San Diego Padres. But after Sunday night’s scheduled game versus the Yankees was postponed because of rain, the Mets listed their starters for Tuesday and Wednesday as TBA.

The game against their crosstown rivals will be made up in the Bronx on Aug. 13.

The news regarding Syndergaard came two days after an alarming health revelation from slugger Yoenis Cespedes, who said he might need surgery on both heels that would require an eight-to-10-month recovery.

“I think he probably was a little bit frustrated that it was more painful than he expected. So I can’t speak for why or how he said it, but he did say it and I think we have to take it seriously,” Ricco said.

“I don’t think it’s a disconnect,” he added. “It’s not like he’s been saying this for months and we haven’t been listening. For the first time, to our knowledge, when he was considering the surgery was when he said that.”

The 32-year-old Cespedes homered Friday night in his return from the DL after missing two months with a strained right hip flexor. He disclosed after the game that calcification on his heels has bothered him for 15 years and caused the lower-body injuries that have limited him to 119 games in 1½ seasons since he signed a $110 million, four-year contract.

“They’re all connected,” Ricco said. “So you’ve got to treat the whole problem. We got him to where the legs are strong, but the heel’s an issue. If he can manage the pain, he can play.

“Surgery hasn’t been a consideration up until this point, until he really brought it up the other night.”

New York initially planned to use Cespedes as the designated hitter Saturday against the Yankees and then start him in the outfield Sunday night, but he was sore Saturday and did not play.

He felt better Sunday and offered to be the DH. But before the game was called, the Mets held him out of the posted lineup again and said he would be monitored throughout the night to see if he might be available off the bench.

“It’s something that he’s managed, we’ve managed with him. It’s one of these things, he has good days, bad days with it. It’s a condition that, surgery is definitely kind of a last-resort thing,” Ricco said. “The way you treat this is with various conservative methods, whether they be orthotics, stretching, anti-inflammatories, and that’s kind of how he’s managed those symptoms over the past years. In this case, he was checked out down in Florida a few weeks ago and it was the same diagnosis. The surgery is fairly radical. It’s going to put you out for a while. So it’s not something that you look to do immediately.”

Cespedes will be examined by doctors Monday, according to Ricco.

“We’re not at odds with him by any stretch. He’s agreeing with every step of the way, the treatment that we’ve given him, to the point where he was anxious to come back, he was feeling good and then he came back and he felt this on Friday,” Ricco said. “I would tell you there’s no disconnect. I spoke to his agent a half-hour ago and we’re all on the same page.”

In other news, the Mets recalled reliever Paul Sewald from Las Vegas. He fills the roster spot that opened when closer Jeurys Familia was traded to Oakland on Saturday.