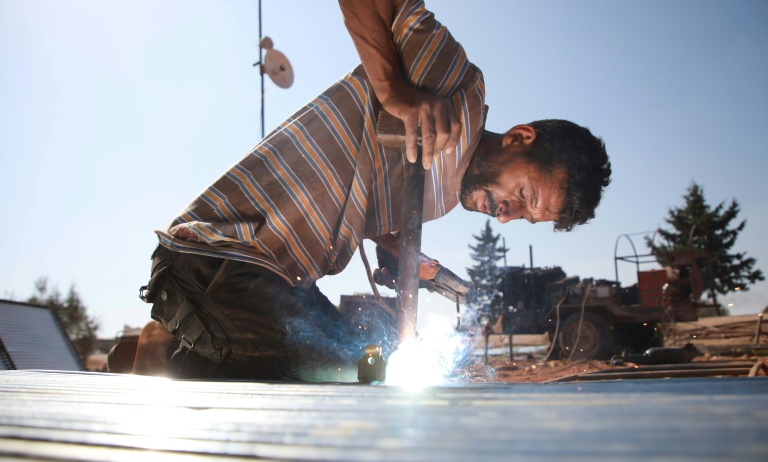 With winter approaching in Idlib province, the man nicknamed "metalsmith of the camps" says his welding skills are in especially high demand.

"So far the orders keep on coming," says the skinny 34-year-old, his skin sunburnt from days working out in the open.

Idlib has come under repeated bombardment by the Damascus regime and its Russian ally this year, causing hundreds of thousands of civilians to flee north towards the border with Turkey.

More than three million people live in the jihadist-held region, and around half of them are already displaced from other parts of the country by fighting.

Mustayf says he once ran a successful metalwork business in southeast Idlib, but two years ago the war forced him and his family to flee their home.

"I had to build my own tent to live in it. People saw it and they started placing orders. So I got to work," he says.

On a patch of red earth near the village of Hazano, Mustayf has set up a makeshift workshop to supply residents in the nearby camp with sturdy frames to shelter them from a wet winter.

Two men unload dozens of long metal poles from a small truck, stacking them on the ground.

Hanging nearby, a modest cardboard sign reads: "Metalsmith of the camps".

Barehanded and sandal-clad, Mustayf saws through metal, sending sparks flying as he prepares parts for his latest order.

The high-pitched screech of his saw temporarily drowns out the sound of a hammer banging on iron and the loud spluttering of nearby generators.

A woman dressed in a long red robe and headscarf watches from afar, sitting cross-legged on a mat in the shade of an olive tree.

The metalsmith welds the structure together with one hand, the other clutching a welder's mask to keep sparks off his face.

To help with the workload, he has enlisted the help of a few cousins and even his 13-year-old nephew, who quit school to help his family make ends meet.

In a month, Mustayf has sold 150 tents. Shelters handed out by non-governmental organisations are too small for large families, he says.

"They're good at withstanding rain and strong winds," he says of his own tent frames.

The smallest frame he sells covers four by four metres (yards) and costs almost $150, while the largest covers 36 square metres (43 square yards) and goes for $320.

Customers then have to buy an outer shell of waterproof fabric from another supplier, and pay someone else to lay a cement base for the tent.

But despite the orders, Mustayf says his profits are slim.

"We make little -- just enough to live off and cover the family's needs," he says.

Indebted for a new tent

Eight years into the Syrian civil war, Idlib is one of the last parts of the country to escape regime control.

Russia-backed regime forces pummelled the region for months over the spring and summer, killing around 1,000 civilians and displacing 400,000 people from their homes.

Reslan Mohammed, his wife, and eight children fled their home three years ago and have been living outdoors ever since.

But this autumn, he decided it was time for a new dwelling.

"The tent we have is not made for winter," the 48-year-old says.

Dressed in a long beige robe and wearing a scarf on his head, he watches as men carry the finished product to his family's patch in the camp.

Small children swing excitedly from the metal bars before they are even set in place.

"I borrowed money from relatives and friends" to buy the new tent frame, Mohammed says.

The new frame in place, he covers it with a patchwork of old blankets. They roll a large woven plastic rug over the earth and lay a thin mattress on top.

Mohammed would also have liked a cement floor, but for the moment that luxury is too expensive.