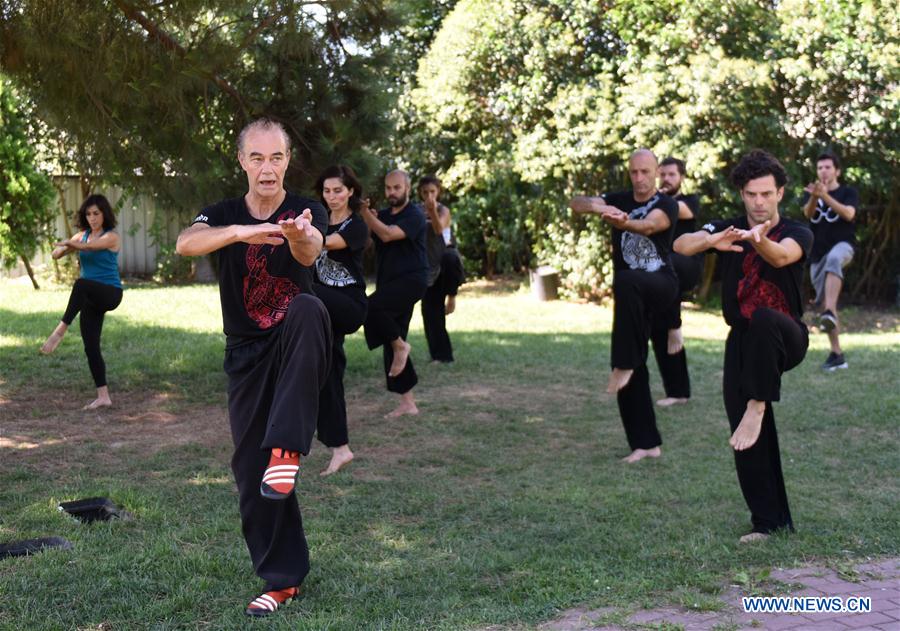 DAMASCUS, Dec. 22 (Xinhua) -- For a handful of Syrians, Tai Chi, an internal Chinese martial art, has become a way of escaping the daily stress caused by the country's more than seven-year war.

With the calm rhythm of spiritual music, a group of people gathers to synchronize their Tai Chi moves twice a week in a training center in Jaramana neighborhood, south of the capital Damascus.

For Syrians, Tai Chi is a new kind of spiritual sport which can help them get through the hard times.

Although Tai Chi is not as popular as other sports in Syria, it has been spread by its followers.

The sport first started to be spread in Syria when Wissam Abanni, a musician, met with a friend who practised Tai Chi in Britain.

His friend told him about this sport and started to teach him some of the moves.

Abanni instantly fell in love with the Chinese martial art. After mastering it, he started to spread it to his musician fellows and local community in Jaramana, which was one of the targets of rebels' mortar shells during the war around Damascus.

The trainer said he started a few years ago with 30 trainees and the number has been growing.

During the war, his students braved the tough weather to come to the center to practise the sport.

"In February last year, mortar shells were raining down on the area. In spite of that, people still came. We used to be practising here with the window shaken by the shelling," Abanni told Xinhua.

Abanni said their advertisement for Tai Chi is still limited, hoping that more people would soon be introduced to the sport.

As for those who practise Tai Chi and get trained by Abanni, they said they have found peace and an escape from pressure.

Rama Dunia, a 24-year-old psychology student, said she has long been interested in Yoga and her readings online have led her to the only Tai Chi training center in Damascus.

"Tai Chi has given me a kind of relaxation and inner rhythm. I have become more focused on my life and job ... So it's something deeply and positively reflects on all aspects of our lives," Dunia told Xinhua.

Syrians, in particular, need to be introduced to this sport and practise it because of the high stress people have suffered over the past seven years, the Syrian woman explained.

"In fact, we are in need of these kinds of activities because of all the stress and the tension we have endured throughout the crisis ... we need to relax and Tai Chi helps a lot to make us less stressful," she said.

Mukhles Kansah, a 52-year-old merchant, said he has been practising Tai Chi for two years.

"In my opinion, Tai Chi is so necessary as it helps us get balanced and relive the stress we are living with. It also helps us relax and develop more sense of awareness and perception," he told Xinhua.

Raid Bager, a maths teacher, told Xinhua that she has been searching for calmness for a long time as she used to get angry easily with all the stress at school, especially during the war.

Now, she has found the inner peace after practising Tai Chi.

"My job requires me to be calm and Tai Chi has helped me gain the calmness I need in my life. It helped me learn how to deal with inner conflicts," she said.

"We used to come here under the shelling or in the bad weather and we were so determined to do so as we had to come because Tai Chi helped us escape this conflict," she added. Enditem