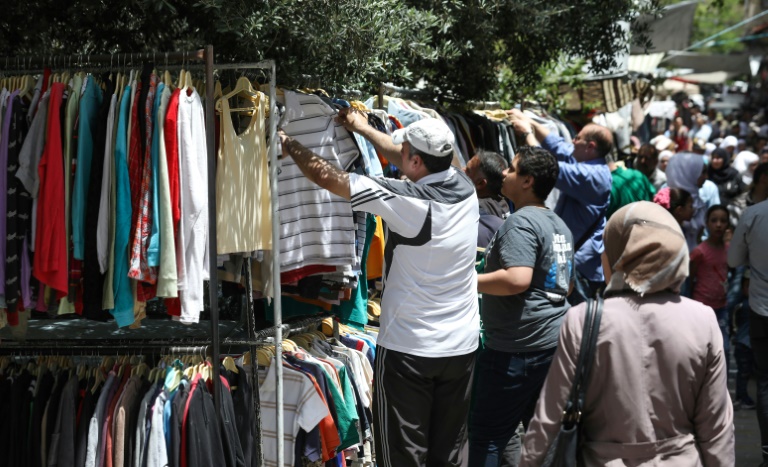 In a large street market in Damascus, customers perused stalls days ahead of the Eid al-Fitr holiday, which marks the end of the Islamic holy month of Ramadan (Photo: AFP)

In a Damascus flea market, Sham Alloush rummaged through a pile of clothes for something nice to wear for Eid al-Fitr that wasn't too expensive.

"The flea market is the only place I can buy something new to wear for the Eid holidays," the 28-year-old, dressed casually in large sunglasses and a tight yellow top, told AFP.

"Had it not been for this place, I wouldn't have been able to buy new clothes at all."

Ravaged by war since 2011, heavily sanctioned Syria is also grappling with a severe economic crisis that has been compounded by a coronavirus lockdown and a dollar liquidity crunch in neighbouring Lebanon.

Prices have doubled over the past year, while the Syrian pound has reached record lows against the dollar this week, further driving up inflation.

With most of the population living in poverty, Syrians have increasingly turned to flea markets to purchase clothes at an affordable price.

In a large street market in Damascus, customers perused stalls days ahead of the Eid al-Fitr holiday, which marks the end of the Islamic holy month of Ramadan.

"The quality of the second-hand clothes is good, their price is acceptable and they suit people with limited income," said Sham, who has been visiting the flea market for years, usually around the holiday season.

But even this thrift haven is not immune to the soaring inflation gripping the entire country, she added.

"The selection of clothes this year is limited and the prices are higher," Sham said, inspecting a pile of second-hand tops arranged haphazardly on a table.

"But it is still cheaper than new ones."

The value of the Syrian pound had plunged to more than 1,700 to the dollar this week in an all-time low, while the official rate remains fixed at 700.

The devaluation has meant that a wide range of products, both imported and local, are now more expensive for war-weary Syrians already struggling to survive.

In a rare acknowledgement of the currency crisis, the central bank warned Tuesday it would clamp down on currency "manipulators" driving up the market exchange rate.

A coronavirus lockdown since March has aggravated the economic crisis, forcing businesses to temporarily close and leaving many daily wage earners without an income.

Malek Abul Atta has just reopened his small shop ahead of Eid al-Fitr, after closing for weeks because of the COVID-19 pandemic.

"I memorise my clients' faces and this year I have noticed new ones ahead of the holidays," he said.

For him and most of his customers, the flea market is the only "window for those who can't afford new clothes", the 52-year-old told AFP, as he arranged t-shirts and dresses on a rack by the side of the road.

"The average monthly salary of an employee is simply not enough."

In another shop in the market, Ghassan Tabbah said business had never been so bad.

"This is the worst holiday season we have seen in years," said the merchant, who had initially hoped he would recover losses sustained during the coronavirus lockdown this week.

With the Syrian pound dropping to unprecedented lows, Tabbah's business is just not reaping a profit.

The businessman said he is offering items of clothing for 500 Syrian pounds (less than a dollar at the official rate) and yet no one is buying.

Before Syria's economy crumbled, his customers included poor people searching for "anything to cover their bodies" to middle-class shoppers looking to buy "international brands" at a bargain, he said.

But now, "food is the main priority for everyone and clothes have become a secondary" luxury, Tabbah told AFP.

With business slowing to a near-halt, the cost of keeping up shop has become too high for the merchant, forcing him to put his store up for sale a few days ago.

He expects others will follow suit if the situation remains unchanged.

"There is no holiday cheer this year," he said. "We haven't had a holiday in nearly ten years."

But for university student Dana Shawka, bargain shopping is in itself a source of joy.

"I can buy three or four items from the flea market for the price of one new item" at a retail store, the 28-year-old told AFP as she scoured the market for a "catch".

"Shopping in the flea market and searching for beautiful cheap clothes has become a tradition before the holiday."