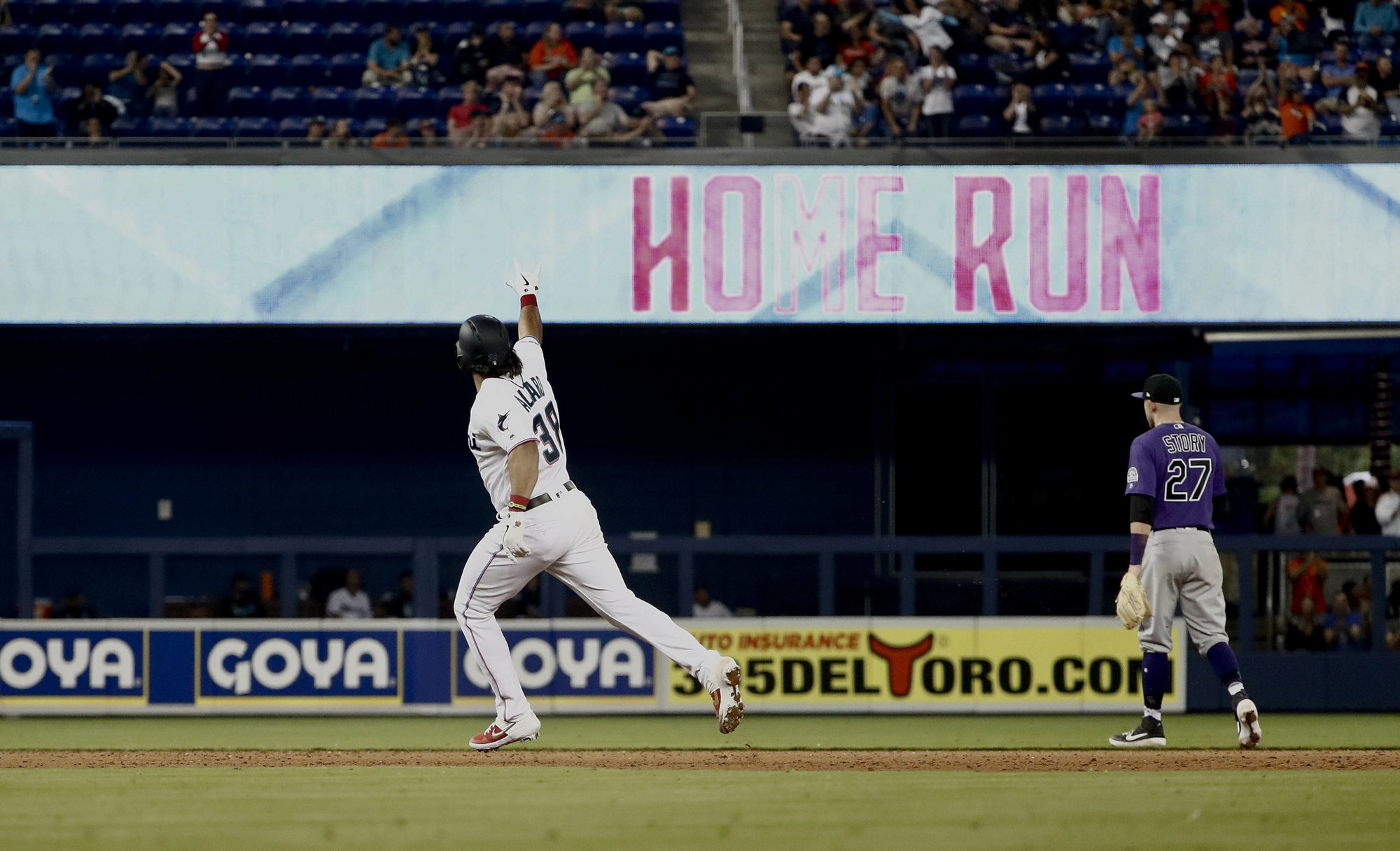 Miami Marlins' Jorge Alfaro runs the bases on a solo home run during the ninth inning of the team's baseball game against the Colorado Rockies on Thursday, March 28, 2019, in Miami. (Photo: AP)

Then it was time to play Home Run Derby on a record-setting opening day.

The ball was flying Thursday — Joc Pederson and the Los Angeles Dodgers connected eight times, and the total of 48 across the majors was the most ever to start.

“Everyone kind of knocked us last year for scoring too many runs off homers,” said Max Muncy, who also connected at Dodger Stadium. “But if you’re going to do it, you might as well do it like that.”

A week after Ichiro Suzuki and the Seattle Mariners swept two games from Oakland at the Tokyo Dome, everybody was in action.

The packed crowd at Citizens Bank Park was especially energized by Harper and the Philadelphia Phillies in a 10-4 win over Atlanta.

The weather also cooperated. A year after it was more fit for snowballs than baseballs at some stadiums, the conditions were fine. A little rainy in Kansas City, causing a slight delay, but no freezing temperatures anywhere.

Cy Young Award winners past and present took the hill — Jacob deGrom and Max Scherzer delivered the marquee matchup that was expected, but a duel never developed between Justin Verlander and Blake Snell. Zimmermann carried a perfect game into the seventh inning at Toronto.

Fernando Tatis Jr. represented the rookies well — just a few months past his 20th birthday, the highly touted San Diego Padres prospect became the youngest player with a multihit game in an opener since Robin Yount in 1975.

Playing up the power factor that often dominates these days, the NL champion Dodgers set an opening day record for home runs in a 12-5 win over Arizona. The eight drives also tied a franchise record for any game.

The sellout crowd in the Bronx had plenty to cheer, including Rivera’s ceremonial toss. The first player to be unanimously elected to the Hall of Fame, he zinged it, too.

In Seattle, the Red Sox were greeted with huge cheers as the champs were introduced. Boston rooters who traveled cross-country chanted “Mookie! Mookie!” for the AL MVP.

The Mariners made a lot of noise with their bats, hitting three early home runs off Red Sox ace Chris Sale, two by Tim Beckham, in a 12-4 win. Then again, the Red Sox lost their opener last year before reeling off a team-record 108 wins.

At Target Field, there was a different look as Cleveland took on Minnesota. The Twins showed off a new backdrop beyond the center field fence, with 5,700 sea green juniper plants now making up the batter’s eye.

The Indians, meanwhile, wore uniforms without the divisive Chief Wahoo logo on them for the first time in 70 years.

Everyone on field, however, wore a path commemorating the 150th anniversary of the first professional baseball team.

In Philly, Harper was a huge hit — even though he went 0 for 3 with two strikeouts.

Fresh off signing a $330 million contract, Harper came onto the field wearing cleats featuring the green Phillie Phanatic. Harper did a pronounced bow to the stands in right field when he took his position and threw a warmup ball into the third deck.

Many fans wore his new No. 3 jersey. Earlier in the day, MLB announced Harper had the sport’s top-selling jersey, ending a two-year run for the No. 99 of Yankees slugger Aaron Judge.

The crowd of 45,000 stood for Harper’s at-bats and chanted his name. Harper’s deal was the largest in baseball history until Angels star Mike Trout topped that with a $426.5 million contract.

Trout, a two-time MVP and generally regarded as the best player in baseball, has never won a playoff game in his eight years with the Angels. He went 1 for 3 as Los Angeles opened this season with a 4-0 loss to Oakland.