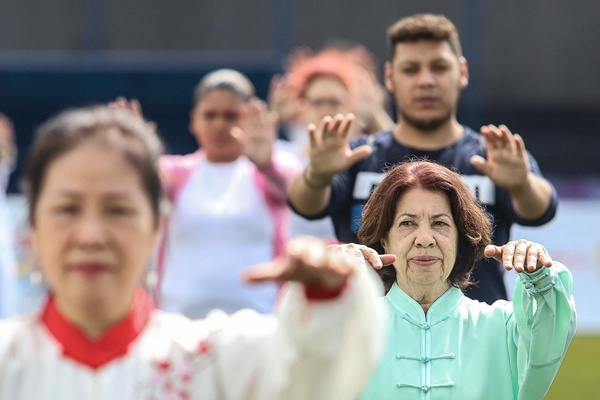 Tai chi is drawing more practitioners around the world. This group of people are practicing in Sao Paulo, Brazil, earlier this year.[Photo/Xinhua]

The seed that the Shanghai University of Traditional Chinese Medicine planted two years ago at the University of West Attica in Greece has grown into an internationally acclaimed tai chi center.

Combining health practices of the millennia-old Chinese medicine with the philosophy and approaches from the West, the center is bearing the fruit by bringing Greece and China ever closer.

The Taiji (Tai Chi) Health Center, launched in the summer of 2018 following a long preparation by the two universities, is evolving into a focal point in the region for practitioners, academics and enthusiasts wishing to get into touch with the authentic elements of the traditional Chinese medicine and learn how it can be applied today in the West.

"The acceptance of the center has been amazing. It was really unexpected for us," George Georgoudis, a professor of musculoskeletal physiotherapy at the university, says.

He has been appointed head of the Musculoskeletal research laboratory at the physiotherapy department and director of the Taiji Health Center, based in Aigaleo, western Athens, which is the embodiment of the cooperation between the two universities, with facilities for tutorials.

"The physical presence of the Taiji center here and the appointment of a director were among the provisions of the 2018 agreement between the two universities, "explains Georgoudis, who made no secret of his enthusiasm about the project which he says has exceeded expectations.

"We are getting so many candidates for participation in our course, as this is the only one to offer proper accreditation via our Lifelong Learning program. We are already fully booked for the program to start this fall," reveals Georgoudis.

Tutors regularly arrive at the Greek university from the Shanghai University of TCM for qigong classes and events, bringing into Greece the authentic knowledge and flavor of the timeless Chinese medical practices to blend with the ancient Greek tradition of "a healthy mind in a healthy body".

"It reflects the evolution of civilization. It constitutes the convergence of cultures in applied medical practices. The Chinese practices are remarkably close to our physiotherapy. They are 90 percent identical," Georgoudis says."They have four pillars-the herbs, the intervention techniques, the therapeutics, and psychotherapy," he adds.

Year after year more activities are added to the offerings for physiotherapists and doctors. Graduates of the one-year training program in acupuncture are able to expand on their knowledge about the subject at the Shanghai University of TCM as well as at hospitals in the Chinese metropolis.

According to Georgoudis, cooperation has been extended to 80 more universities across China "thanks to the eagerness and support of the Shanghai University of TCM", and is about to involve another Greek institution of higher education-the International Hellenic University in Thessaloniki, which is to join one of the center's programs in the new academic season.

Despite the challenges posed by the novel coronavirus pandemic, the UNIWA managed to carry out its educational program online, with help from China. "This was actually a blessing in disguise, as it has opened new ways for us. The online tutorials directly from Shanghai gave us fresh perspectives into teaching techniques and cooperation that we are about to apply and expand to more programs," the director of the center says.

Next season's acupuncture course at UNIWA, a 10-month, 300-hour module, will involve live online teaching from Shanghai, as the Greeks have realized the importance of having theory come straight from its source in this case."We used to believe that physical presence was necessary, but we saw that the teaching of theory has great value," notes Georgoudis.

"Our center has also been very popular among the academic staff, offering them treatment, support and guidance on a weekly basis," he adds.

The national and international acclaims were quick to come to the acupuncture program of UNIWA, thanks to cooperation with its Shanghai partner. The program has been highlighted as an exemplary program by the World Confederation for Physical Therapy in the subgroup of the International Acupuncture Association of Physical Therapists.

And all this has been witnessed two years since the seed was planted in Athens.