The Pudong area of Shanghai is the epitome of a China success story. What was once marsh, farm and rice paddies is now a glistening powerhouse of cosmopolitan life and economic development. The cornerstone of this district is the infamous futuristic skyline of the Lujiazui Finance and Trade Zone that faces the Bund across the river and has become a financial nexus of China. 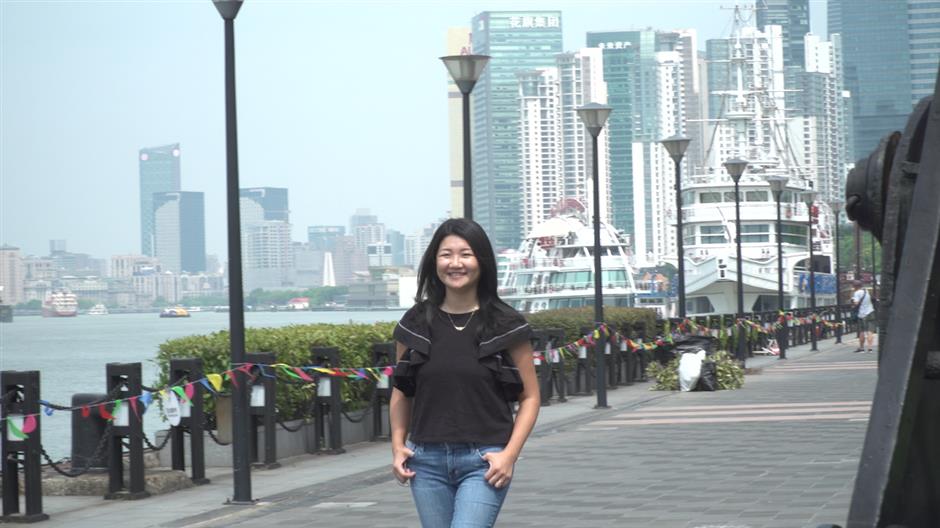 In little over a decade, Pudong has undergone radical development and change, encapsulated in visible transformation as buildings continue to spring up. The district has become the prized personification of Shanghai’s modernization and China’s drive to open up to the global community.

Shanghai Daily spoke with a long-term resident of the Pudong area in order to hear the insights of an eyewitness to the growth and change of the district.

Christine Hsu, 42, is from Taiwan, but she spent the majority of her childhood growing up in the US. She has lived in the Weifang Xincun subdistrict of Pudong for ten years with her husband, Tom Hsu, and their four children.

Walking inside Christine’s apartment, your gaze immediately settles on the floor-to-ceiling windows that replace one of the sitting room walls, providing a panoramic view of the Huangpu River as a barge and a litter of tugboats meander past.

Puxi is a stone’s throw away. The surrounding walls are clad with contemporary artwork the Hsu family have collected while back in China, as well as a smattering of family photographs. Christine is a mother of boys aging from 2 to 14, and she spends her time maintaining their hectic schedules and doing volunteer work.

Early in the interview, it becomes apparent that Christine’s attachment to Shanghai has spanned decades of her life. She first came to Shanghai in 1995 to study political economy, specifically the economic development of China, at Wellesley College with Fudan University. Christine remembers how Pudong was desolate then, with just the Oriental Pearl Tower standing as an indication of things to come. She notes how this embryonic development extended into Puxi as well, where the only place to shop at the time was the Friendship store.

Returning to Shanghai in the following century, Christine saw her personal shift from student to mother and wife mirrored by the change that Shanghai had likewise undergone. Perhaps owing to her previous study of the country’s expansion, Christine wasn’t surprised. “I knew it was coming, but I think the speed of change really surprised a lot of people.”

When discussing her family’s motivations for the move to Shanghai in 2008, Christine explains how her parents relocated from Taiwan to Los Angeles so that she could enjoy a better quality of education. “Ironically, when we moved to Shanghai ten years ago, we were also looking for the same thing. We were looking for a better education for our kids.”

Seeing Shanghai as being in the throes of momentous change, Christine wanted to be here to witness that transformation: “We also wanted to be able to allow our kids to grow up in a place that is so dynamic.”

Christine and her family rooted themselves in Shanghai shortly after the Beijing Olympics. She recalls the buzz of the city in the wake of the Games, making note of the spectacular opening ceremony and how “every taxi driver asked us if we watched the Olympics — everyone was so impressed and amazed.”

Gesturing towards the voluminous window, Christine refers to a coal depot that was situated on the riverbank when they first moved in, amassing tumbling piles of coal that the wind would blow across and pick up soot. “I remember when we first moved in and purchased the apartment from a German couple who had filled it with Chinese art and antiques, but when the walls were stripped bare, you could see exactly where their air purifiers were because around the air purifier was just this black stain.”

She informs us how the depot was moved before the Expo in 2010, and how the site is now the Museum of Modern Art. “I just thought, that is something that symbolizes a lot of change for us, for this part being something that was so industrial, almost a wasteland, to something that is now cleaned up.”

The Mercedes Benz Arena is visible from Christine’s apartment: a sleek, white disc further up the river. At the time of the Expo the China pavilion was also visible, but a series of new buildings have since obstructed it. “It was really exciting seeing how the Expo changed Shanghai and drew a lot more foreigners into the city, and a lot more people from the provinces as well. I think that was a big tipping point for Shanghai.”

The activity of the river while we have been speaking is notable; ferries, cruises and barges relentlessly edge past one another at variant speeds. Christine reflects on how she has always loved living on a body of water like this, from her childhood in L.A., next to the Pacific Ocean, to her current residence on the Huangpu River.

When talking about what they do as a family, the river is often a prominent feature due to the recent opening of the riverside promenade, providing a tarmac route for cycling or running from Lujiazui down to the Expo site. “We really enjoy biking as a family along the river — it’s exciting to explore the river area,” she says. “It’s just something that really adds to the quality of life for families living in the area.”

Pudong is connected to Puxi by several tunnels and four major bridges, one of which is visible from Christine’s apartment, complete with fly-sized cars creeping across the gap between the two districts. “It’s a city of lots of bridges and tunnels, and to me it embodies Shanghai as a gateway city because Shanghai doesn’t really represent all of China. People from every province in China come to Shanghai to seek better opportunities, so people from all over China and people from all over the world come and gather here. You don’t see that to the same extent in Taiwan or a lot of other cities.”

We return to our initial topic of conversation, the reason for the Hsu family’s relocation to Shanghai. Christine explains how she was really drawn to how, as a city of bridges and tunnels, it’s a place where East and West, and all of China, meet together. “I just really wanted my kids to grow up in a place like this, where they could have friends from different provinces in China and friends from all over the world, growing up as global citizens. We were really lucky to arrive at a time when China was making a huge push in the international field.”

As a family living in Pudong, Christine has nothing but praise for the district. “We thrive on all the green space, the cleaner air, the open views, the easy commute to school.” She casts her gaze across the apartment. “I’m so excited about Shanghai and this place.”

Just as Pudong is an advanced area of China, it is clearly populated with similarly forward-thinking people, who are conscious of the progress the district is experiencing and will continue to undergo in the future.