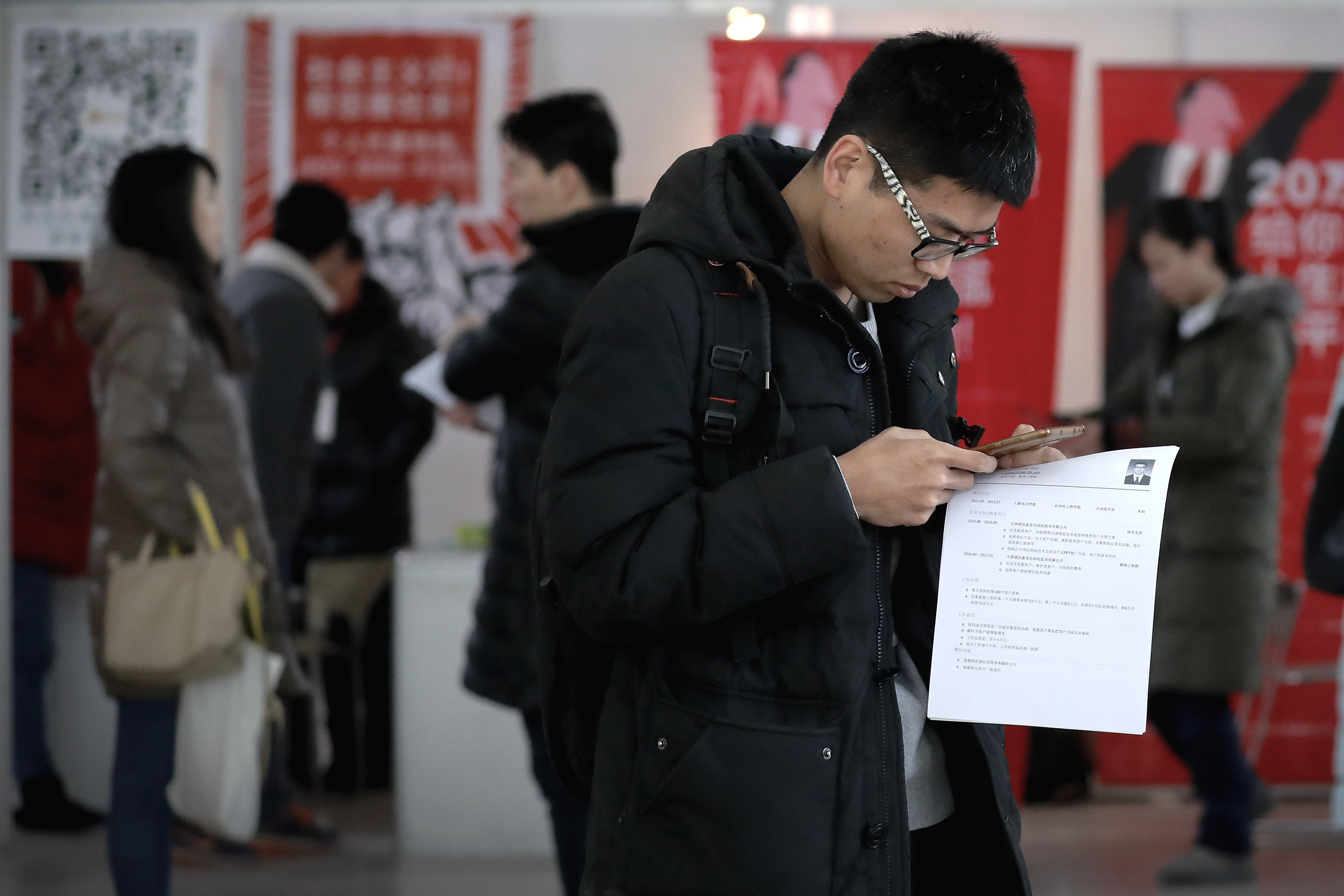 A man holds his resume as he seeks job vacancy information via his smartphone at a job fair in Beijing, China. (Photo: AP)

For 24-year-old Wu Yuting from Taiwan, trying to decide between Peking University and graduate schools in Taiwan didn't take long.

"It is really easy for students from Taiwan to apply for top colleges in the Chinese Mainland, e.g. Peking University and Tsinghua University. All you need to do is fill in the online application, send your documents, and all instructions are laid out clearly online," said Wu.

The 24-year-old, who is now studying at the School of International Studies at Peking University, considers the school her home. After her one-year study in Beijing, and with multiple internships in companies in the Chinese mainland in her "baggage," she has now set her mind to applying for jobs on the mainland to test out her ability in the job market.

According to the latest statistics from the Taiwan Affairs Office of the State Council, more than 12,000 students from Taiwan are studying in higher education institutions in the Chinese mainland by the end of 2019. The number in 2018 was five times higher than that in 2017, signaling a greater interest among the youth in Taiwan for higher education in the mainland.

Behind the jump in the number of students from Taiwan in the Chinese mainland is the government's steady push to lower academic entry thresholds to encourage more applications from the southeast China island region.

In 2010, the Chinese Ministry of Education started to allow Taiwan students to use the score they obtained in the island's college entrance examination for application in the mainland universities. Initially, only those who scored among the top 12 percent were allowed to apply. That later expanded to 25 percent and last year, the top 50 percent were all eligible.

In addition, in 2017, China's Ministry of Education started to grant scholarships to bachelor, master and PhD students from the island studying in universities and research institutes in the Chinese mainland. In the last three years, more than 7,000 Taiwan students were among the recipients of national-level government scholarships.

On top of more scholarships being available to students from Taiwan, the annual fees at mainland universities are also more affordable compared with universities in Taiwan.

In 2005, Taiwan students studying at mainland universities were allowed to pay the same tuition fee and boarding fees as their mainland peers. The annual tuition for undergraduates at Peking University costs around 5,300 yuan (761 U.S. dollars) which is much cheaper compared with the annual fee in the University of Taiwan, where the lowest tuition stands at around 3,300 U.S. dollars.

In search of better academics and employment opportunities

Though Hung's time at Peking University was not long— four months — he spoke highly of the program and its faculty. "Most of the classes I attended are of smaller size, and the reading materials assigned are more comprehensive and in-depth than classes in Taiwan," he said, attributing his ability to catch up with his studies in Waseda to his time in Beijing.

"It is only when I started in Peking University that I formed the habit of reading English-language research materials," he added.

In comparison, starting salaries for graduates in Taiwan have stalled since the late 1990s. According to a survey done by Grassroots Influence Foundation in Taiwan, around 60 percent of the 1,100 respondents said the employment opportunities in Taiwan are lacking. Around 50 percent said if possible, they would go to the Chinese mainland for employment or entrepreneurship.

What has been particularly notable in recent years is the boom in internet business in the Chinese mainland, which dwarfs that of Taiwan. Home to 206 tech unicorns, in such field as e-commerce, electric car and healthcare industries, China is on its way to overtake Silicon Valley as the world's tech hub, leading to the hiring boom and wage growth for graduates willing to work in the field.

A few months to go before her graduation, Wu said she is determined to work in internet companies in the Chinese mainland after she finishes her studies. During her previous internship at ByteDance, one of China's top tech innovators, she said she learnt tremendously from the company's way of management and the lessons learnt would be beneficial for her future plan to open up a business in the mainland.

"For those with career ambitions, opportunities in the mainland are much more available. If you are willing to work hard, you can reach the height that is unimaginable in Taiwan," said Wu.