Taro trending as a winter treat

Many tea franchises have launched taro-themed beverages to follow in the footsteps of brown sugar-based “dirty teas” which topped the sales last summer. 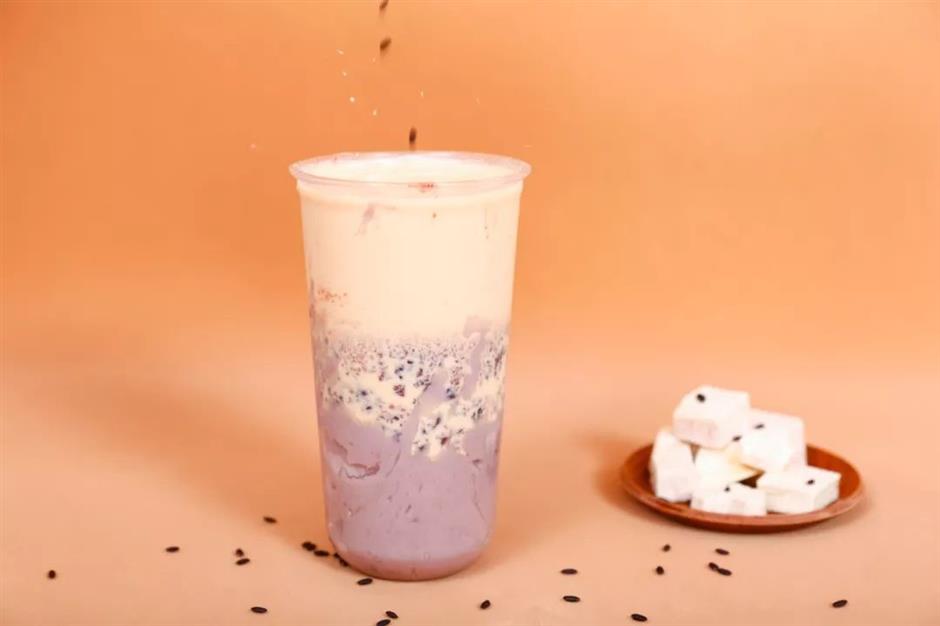 Taro teas, in general, feature a well-blended taro mash as the base for pure milk or milk tea. Because of the taro mash’s starchy and sticky texture, the teas are quite heavy and dense. If other ingredients, such as tapioca balls, herbal jelly and Oreo crumbs are added, there isn’t much liquid left to drink.

Some brands even mix taro with other root vegetables like purple sweet potato and the consistency is almost like a sweet congee.

Snacks made of taro are growing very popular, too. 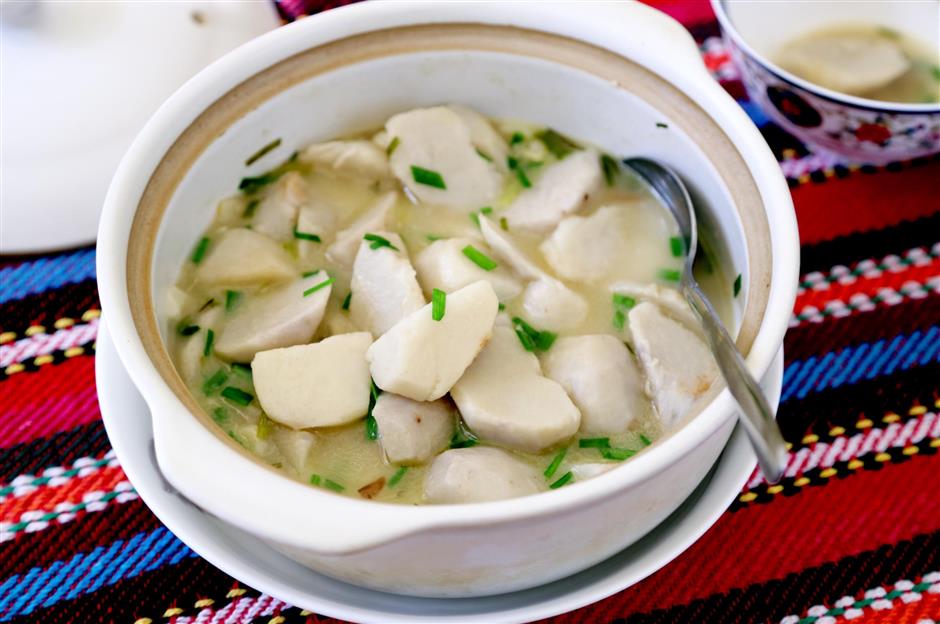 Taro is a versatile root vegetable that can play many roles in cooking. Dishes made of taro can be sweet or savory, and with no prominent flavor of its own, taro is an easy ingredient to work with.

There are two common kinds of taro: Eddoe taro is a small and oval-shaped variety known as yunai and the very large Lipu taro which was named after its place of origin, Lipu County in Guilin, Guangxi Zhuang Autonomous Region.

Yunai stir-fried with scallion is a local favorite in autumn and winter. The whole taros are peeled and cut in large chunks, then fried with scallion and garlic in some oil. When the color of the taro turns golden, water or chicken stock is added to stew until the taro becomes softer and the soup thickens. The dish is served with chopped scallion on top.

In Jiangxi, Fujian and Zhejiang provinces, yunai is used to make delicious taro dumplings, the wrapper of which is a mixture of crushed steamed yunai and tapioca flour, while the filling is classic savory pork. The dumplings are served in soups or with dipping sauces when boiled to cook.

Though Lipu taro is widely used in cooking and most taro-related snacks and beverages are made of it, many Chinese people came to know about this variety of taro from the 1996 TV series “Prime Minister Liu Luoguo,” in which Lipu taro was Guangxi’s tribute to Emperor Qianlong, who was deeply impressed by a simple steamed Lipu taro with sugar.

The spindle-shaped Lipu taro is very large, on average it weighs at least 500 grams. A special characteristic of the taro is the thin purple patterns in the white flesh.

Compare to yunai, Lipu taro has less moisture and a higher starch content, so the taro tastes sweeter and softer.

When working with raw, fresh taro, a tip is to wear gloves to avoid direct contact with the sticky juice, which can irritate the skin.

Lipu taro fried rice is a staple dish that stir-fries diced taro with sausage and vegetables.

A traditional dish made of Lipu taro is steamed taro with pork belly. Both ingredients are fried before being steamed with spices and condiments, as frying the taro makes it easier to soften and soak up the sauce.

Steamed Lipu taro seasoned with salt, light soy sauce and oil makes a popular dim sum dish. The small cubes of taro are also steamed with pork short rib cuts so that the taro can absorb the juices and flavor of the meat.

Similarly, you can stew or braise taro with rich meats as an alternative to potatoes and carrots. Taro and duck is a classic combination.

Taro flowers are also edible. In Yunnan cuisine, the plant’s yellow flowers with buds removed are stir-fried with pork to make a quick dish. 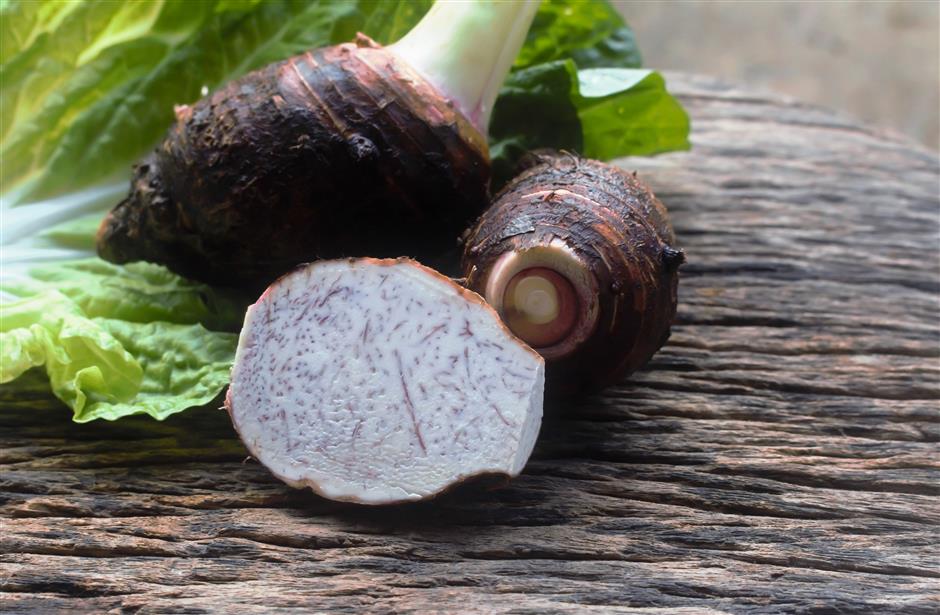 Taro is stewed with ingredients such as sweet potato to make tangshui soups (sugar water). The taro balls sold as a topping in dessert or tea shops are made of a blend of taro and tapioca flour, the texture of which is very chewy.

In Chaozhou and Shantou, Guangdong Province, there is a unique sweet taro dish that coats fried taro sticks in hot sugar glaze, then by removing the heat immediately and using a fan to cool the wok while stirring the taro, a sugar frost will appear. 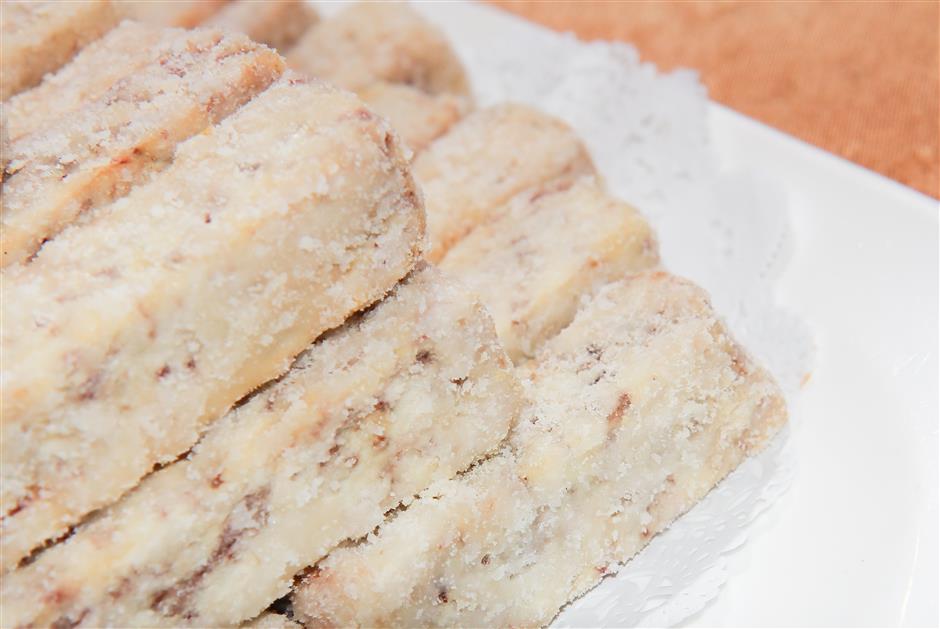 Taro chips are stealing yam chips’ show, as the latter has been a popular alternative to potato chips in China. Chips made of taro are similar and they are also fried, they come in thin crisps or sticks.

The bestselling flavor of thin taro chips is peppercorn salt. The balance of sweet and salty flavors makes it hard to stop eating until you hit the bottom of the bag. The chips are baked instead of fried, so they are not very greasy.

If you prefer the original flavor of taro, then taro sticks from Vietnam are great snacks, although the aromatic chips are quite dry. 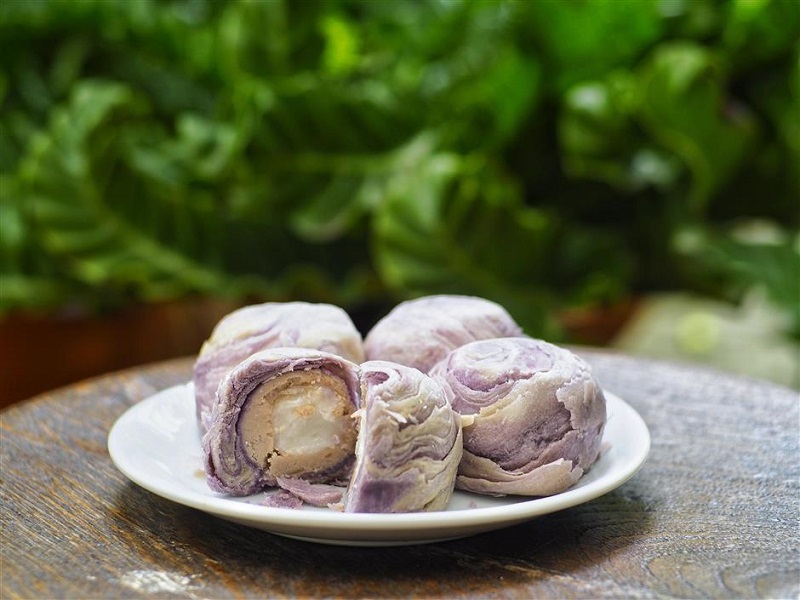 Lawson’s new taro-flavored cake is one of the recent hyped-up foods. It’s basically a snow skin mooncake (the wrapper is made of glutinous rice and it’s non-baked) with soft cake, cream and taro paste as filling.

Taro paste is widely used as a filling in cakes, pastries and mochi. It’s easy to make your own at home by stir-frying steamed Lipu taro which has been mixed with light cream, milk and sugar in some oil. The paste can also be used as a spread on toast for breakfast.

A traditional taro paste recipe would use lard instead of cream or butter.