Taylor Swift wins Grammy for Album of the Year for 'folklore' 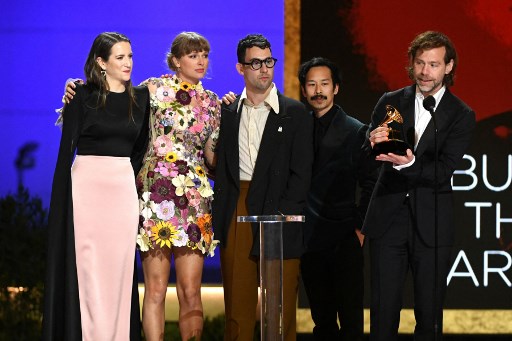 In this handout photo courtesy of The Recording Academy, (L-R) Laura Sisk, Taylor Swift, Jack Antonoff, Jonathan Low and Aaron Dessner accept the Album of the Year award for ‘Folklore’ onstage during the 63rd Annual Grammy Awards Ceremony broadcast live from the Staples Center in Los Angeles on March 14, 2021. /AFP

Pop powerhouse Taylor Swift won the Grammy for Album of the Year for "folklore," her first of two quarantine records -- the third time she has won the coveted trophy, putting her in rarefied company.

Only three other artists have won Album of the Year three times -- Stevie Wonder, Paul Simon and Frank Sinatra.

It's been a banner year for Swift, the one-time Grammy darling who surprised her legions of fans not once but twice during the coronavirus pandemic in 2020, releasing "folklore" over the summer and "evermore" as an early holiday gift.

"folklore" -- which earned the star six Grammy nominations -- saw the famously introspective Swift delve into songwriting from the perspective of others, storytelling in the vein of American musical folk storytellers including Bruce Springsteen, Bob Dylan and the late John Prine.

Sunday's big win marked a return to the Grammy spotlight for Swift, who appeared to have fallen out of grace with the Recording Academy in recent years.