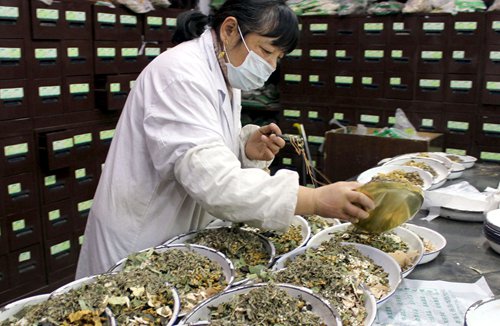 Traditional Chinese medicine (TCM), the time-honored medicine in China, is vying for a chance to rejuvenate amid the outbreak of the deadly novel coronavirus (COVID-19) in the country, and its sales in overseas markets are also likely to be on the rise, industry insiders told the Global Times.

Since proving to be effective in helping cure patients infected by COVID-19, which has killed more than 2,000 people so far in China, TCM has realized its potential value and become more accepted by the public.

Renowned Chinese respiratory expert Zhong Nanshan highlighted the studies on TCM in the battle against the virus during a press conference held on Tuesday in Guangzhou, capital of South China's Guangdong Province.

The herbal prescription named "Pneumonia No.1" applied on January 23 had proved effective in the treatment of COVID-19 patients in the province, according to Zhong.

On Monday, Li Yu, an official with the National Administration of TCM, said the decoction named "Qingfei Paidutang" has been used in treating 701 confirmed cases in 10 provinces, of which 130 have been cured and discharged, adding that the decoction was recommended to medical institutions across the nation on February 6 after data analysis on 214 cases.

More than 3,100 medical personnel from over 630 TCM hospitals across the country have been sent to aid Central China's Hubei Province, hardest hit by the epidemic, Xinhua News Agency reported.

Industry observers said that TCM has played a key role in treating the infectious disease given its current effects and shows prospects as no targeted medicine or vaccine has been developed as yet.

Chinese health officials have called for stronger cooperation between TCM and Western medicine in a combined effort to prevent and treat the disease.

In the latest version of the COVID-19 diagnosis and treatment scheme released on Wednesday, there is a specific chapter detailing TCM treatment during a patient's medical observation, clinical treatment and recovery period.

In an industry guideline issued by the State Council last year, it was pointed out that boosting the development of TCM is significant in upholding the principle of placing equal emphasis on traditional Chinese and Western medicines, and to develop a model of health with Chinese characteristics, featuring the complementary and coordinated development of TCM and Western medicine.

It is expected the whole TCM sector will be boosted thanks to its performance in the fight against the virus, Zhang Ziran, vice president of the China Association of TCM, told the Global Times on Wednesday.

Liu Zhifeng, board secretary of Jiuzhoutong Medicine Group based in the epicenter of Wuhan, Hubei, told the Global Times Wednesday that the company has been working around the clock to provide decoction cooking and delivery services for 7 Fangcang makeshift hospitals where patients suffering from mild symptoms of disease are being treated, as well as other quarantine venues.

"As some firms have resumed work after the Spring Festival break, there is a surging demand for the therapy as a preventative measure. Many local firms have placed orders for the cooked herb to distribute to their employees," Liu said.

Construction workers at the sites where makeshift hospitals are being built have also been taking the medicine to prevent infection by strengthening their immune system, according to Liu.

"It seems that the prevention method of taking TCM has been more accepted from the top to the general public, marking a good sign to promote the concept of 'treating before disease comes,' which was popular after the outbreak of SARS or severe acute respiratory syndrome, in 2003," a veteran industry observer based in Beijing told the Global Times, speaking on the condition of anonymity.

The herbal medicines were widely used in China in conjunction with Western methods during the SARS outbreak.

On the stock market, TCM-related shares have rallied. The TCM sector has been at a low-value level in the A-share market and its investment value should be highly noticed, according to analysis by Guojin Securities.

The recent application in preventing and curing COVID-19 has brought strategic opportunities to the traditional therapy, the investment bank said.

Apart from a domestic boost, it is likely that TCM's exports to overseas markets will improve, especially among East Asian and Southeast Asian markets where the epidemic has also been spreading.

Liu Yang, a manager at the administration department of Anhui Xiehecheng Chinese Herb Ltd, told the Global Times on Wednesday that the company has so far received no orders from its international customers but he thinks that once TCM's effect on COVID-19 is acknowledged in those markets, as is now the situation in China, "orders will naturally come."

Based in Bozhou, East China's Anhui Province, the firm is engaged in the cultivation of medicinal materials, processing of Chinese herbal medicine decoction pieces, imports and exports. Its TCM products are exported to such markets as South Korea, Southeast Asian countries and Europe where there are large Chinese communities.

As of press time on Wednesday, there are 616 confirmed cases of coronavirus in Japan, the most outside China, while there are 81 cases in Singapore and 51 in South Korea.

"We are now closely monitoring the virus spreading in foreign countries to estimate the trend," Liu Yang said.

"Asian countries tend to believe in the Chinese herb, so if their authorities can support promoting the application of it to fight the disease, I think our exports will go up," he added.

Sales of herbal material and processed products have increased robustly for the firm with a compound annual growth rate at 15 percent, reaching $35 million in 2019, according to Liu Yang.

Data from the China Chamber of Commerce for Import & Export of Medicine & Health Products showed that China's TCM export value has been making strides since China joined the WTO in 2001, recording about $4 billion in 2018, up 7.39 percent year-on-year, and the US has been the biggest export destination, followed by Japan and China's Hong Kong Special Administration.