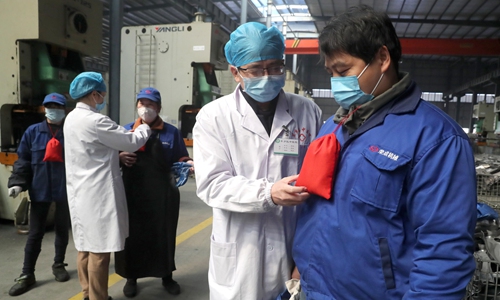 Traditional Chinese medicine (TCM) has been widely used in China's fight against novel coronavirus pneumonia, as five kinds of prescription were tested effective against the virus, experts said, amid controversy over the thousands-year-old therapy's efficacy compared with modern medicine.

Zhong said many Western medicines were proven effective against the virus in labs, but lost efficacy on patients. In contrast, TCM, like the Lianhua Qingwen capsules, have been widely used in clinical treatment and proved effective in stopping the virus and relieving inflammation, which can serve as evidence for TCM's effectiveness, Zhong said.

TCM has been applied in the treatment of more than half of the confirmed patients of COVID-19 in epidemic-stricken Hubei Province, an official from the National Health Commission said on Saturday.

TCM can achieve apparent effects on the patient at the early stage of the disease. A type of herbal medicine soup has proven effective for 90 percent of the COVID-19 patients, as revealed by clinical observation, the National Administration of Traditional Chinese Medicine previously announced.

Although the combination of TCM and Western medicine is an important feature of China's fight against the novel coronavirus epidemic, the application of TCM still encountered controversy with some Western medicine supporters, who doubt the scientific basis and clinical evidence for the treatment.

At the Tuesday press conference, Yang Zifeng, an expert from the Guangzhou Institute of Respiratory Health, said that five kinds of TCM, including Lianhua Qingwen capsules and Liushen Jiaonang capsules, among 54, were tested effective in curbing the novel coronavirus in vitro experiments conducted by Guangdong medical institutes.

A TCM called Pneumonia No.1 has also been widely used in Guangdong on COVID-19 patients.

According to Wang Guilin, director of the Guangdong science and technology bureau, as of Monday, 84 percent of the 121 patients who had taken the medicine for more than six days returned to normal temperature and 74 percent showed improvement in chest CT results.

TCM is a vital force in fighting the COVID-19, Wang said at the press conference.

Meanwhile, he warned that Pneumonia No.1 only suits COVID-19 patients with slight symptoms, not severe patients, and healthy people should not take it as prevention without guidance from doctors.