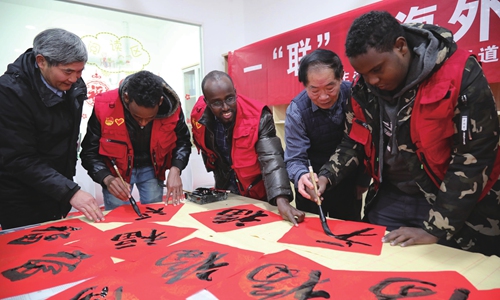 A member of the political advisory body in Shanghai suggested that Chinese universities introduce more content about Chinese history, culture and political concepts to international students in college courses to enhance their understanding of China.

Tang Ningyu, a member of the Chinese People's Political Consultative Conferences Shanghai Municipal Committee, made the proposal at a committee meeting on Tuesday.

Tang, who is also a professor at Shanghai Jiaotong University, noted that foreign students are required to learn the Chinese language and some cultural knowledge, but history and political education are usually exempt not part of their curriculum. It is necessary to provide them such knowledge in their regular classes, she said.

"Ideological and political education for foreign students should not be a forced promotion of related concepts," Tang told the Global Times on Wednesday, noting that the courses have to be customized in a way that foreign students could understand and accept, considering the cultural differences.

"Studying in China gives them a good chance to know more about China's socialist road with Chinese characteristics and its socialist core values without prejudice," Tang explained, aiming to cultivate some foreign talent who know China and love the country.

"It's reasonable to learn more about Chinese history and culture and the society as a whole through our courses; after all, this is the reason why we came here to study," Ayako told Global Times on Wednesday.

In the proposal, Tang also suggested forming a standard admission system to improve the quality of foreign students admitted.

She believes it is helpful for international students to know about China's political system if they want to develop their careers and stay long in China.