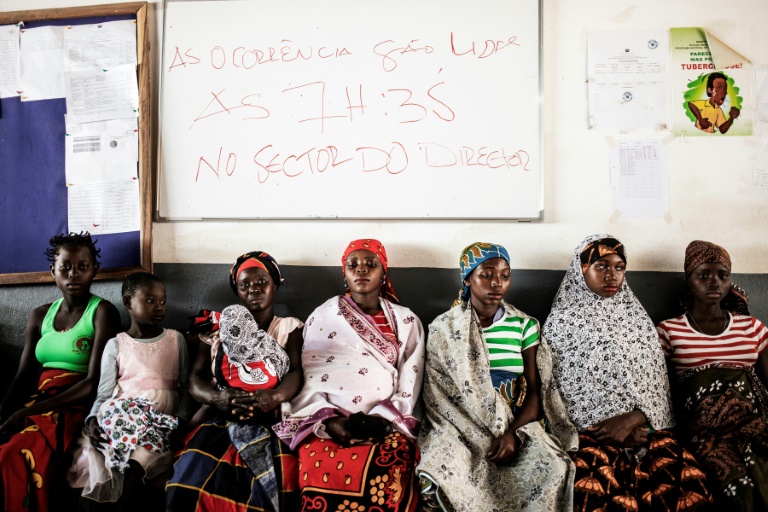 Mozambique's child marriage and teen pregnancy rates are among the highest in the world. (Photo: AFP)

In the tiny maternity ward in Murrupelane, two 16-year-old mothers breast-feed their babies, both born that morning.

Mozambique's child marriage and teen pregnancy rates are among the highest in the world, a driving factor in the population explosion in this poverty-plagued southern African nation.

After emerging from a brutal war in 1992, the former Portuguese colony saw its population swell 40 percent in the two decades to 2017, reaching 29 million today.

"My parents really wanted me to get married," says Julia Afonso, one of the girls who has just given birth in Murrupelane, a village in the north.

Around half of Mozambique's women -- 48.2 percent -- marry before they turn 18, according to UN children's agency UNICEF.

Of girls aged between 15 and 19, 46.4 percent are either pregnant or have already become mothers.

Young parents "cannot feed their children, and the mums leave school," he said. As a result, 58 percent of Mozambican women are illiterate.

Ema Nelmane, now 13, gave into the advances of a man she met in the market who offered her 200 meticals (three euros) for her virginity.

"She saw a chance to get the same shoes her friends were wearing," her grandmother said, by way of explanation.

When she fell pregnant, Ema was flabbergasted.

"I didn't know you could get pregnant by making love," she said, breast-feeding seven-month-old Ismail in the clay yard outside her grandmother's home.

Ema was plunged prematurely into the world of adults.

"I can't go out and play with my friends anymore," she said.

As in other developing countries, teenagers in Mozambique often fall pregnant "through lack of education", said demographer Carlos Arnaldo.

"Parents see in these births a guarantee that they'll be looked after when they get old."

Until recently, Mozambique's government did little to tackle demographic problems.

But the mounting costs of the population boom have forced a change of thinking.

"The economic consequences for the government are that it has to build hospitals and schools," said Pascoa Wate, head of maternal and child health at the health ministry.

"In spite of government spending, people don't have access to them."

In a bid to curb the population explosion, Mozambique's government is in the process of changing the law to allow marriage only at 18, rather than at 16 with parental consent.

"We know that the practice of early marriage is rooted in deeply-seated cultural values and social norms that prioritise fertility," said Youth Minister Nyeleti Mondlane.

With UN support, Mozambique has also been waging a contraception awareness campaign since 2016.

Only a quarter of women currently have access to contraception, according to a national health survey.

In the shadow of a mango tree in the northern village of Namissica, a dozen women crowd around a table to watch a nurse demonstrate how to use different contraception, with the help of a wooden model penis and a plastic vagina.

If their husbands are "not cooperative", nurse Fatima da Silva Cobre advises women to opt for a birth control implant.

The women ask anxious questions: could the implant fall out? Won't it make them infertile?

One by one, the nurse debunks the myths.

Reining in the population boom also depends heavily on male education in a country where "it's they who dictate sexuality to girls", said Gilberto Macuacua Harilal.

A crusader against underage pregnancies, Macuacua uses his weekly television show "Man To Man" to denounce churches that defend marriage under 18, as well as traditional initiation rites, common in Mozambique.

During such ceremonies, "boys aged eight to 12 learn to punish girls by forcing them into sex," he said.

Slowly, the message is starting to get through.

Jaoa Carlos Singano, a village chief in the northern Rapale district, said that for a year "we've been trying to convince officials who carry out the initiation rites to be careful in the instructions they give boys".

But the need for change is urgent.

At current rates, the population is set to double in the next 25 years.

"It is a race against time," says Mondlane.