CULTURE Ten things you might not know about jellyfish 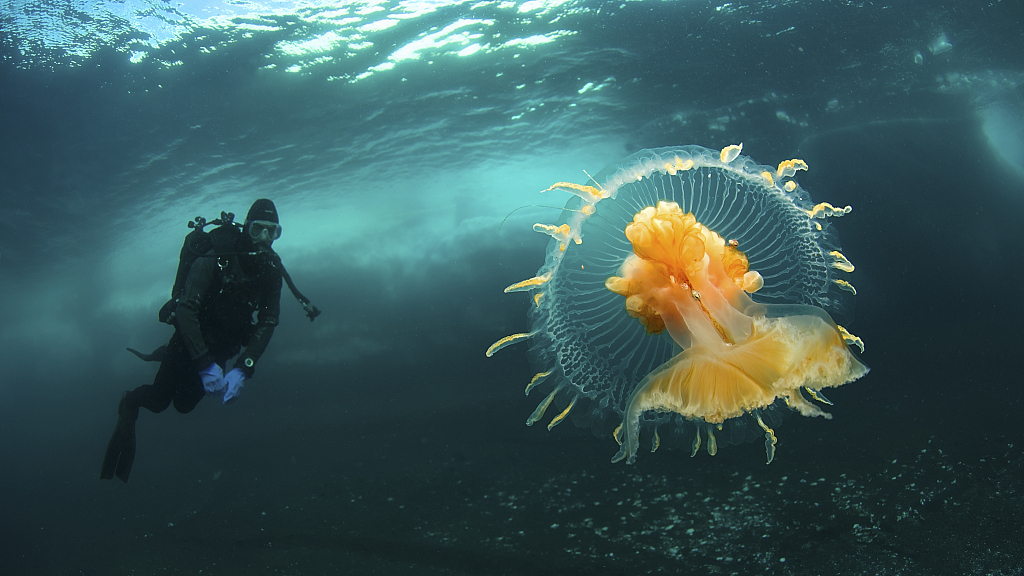 A large jellyfish can be bigger than a diver. (Photo：VCG）

If you want to know a little bit more about the amazing creatures besides their breathtaking beauty, here are some fun facts:

1, The jellyfish is one of the most ancient animals.

2, The ocean is not the only home for jellyfish.

There are more than 2,000 known species of jellyfish, among which over 90 percent are smaller than your thumbnail. The smallest can be as tiny as one millimeter. The largest, on the contrary, can be huge and scary. The lion's mane jellyfish is considered the biggest jellyfish and the longest animal worldwide, with tentacles that may extend up to 36.5 meters (though most are nowhere near that large).

4, The jellyfish is basically made of water and nerves.

Jellyfish's body is made up of 85-98 percent of water. It has no organ, no brain, and almost nothing but a nervous system, which allows it to perceive basic senses like smell and touch. Besides, it has only one opening to eat, excrete waste and reproduce.

5, The jellyfish is immortal?

One jellyfish species might be effectively immortal, because it can transform from an adult back to larva stage, thereby escaping death. This has only been observed in the lab. Scientists are still working to reveal its secret.

6, The most venomous jellyfish is deadly.

A jellyfish tentacle can release millions of sting cells to its prey once touching it. Not all jellyfish sting, and most jellyfish stings are not fatal. But the box jellyfish is the most dangerous and can be deadly to human. A jellyfish murder even happened in Conan Doyle's Sherlock Holmes series. In one short novel, a lion's mane jellyfish killed a swimmer.

7, Never pee on a jellyfish wound.

What if you get stung by a jellyfish, do not apply alcohol, ammonia, or freshwater on the wound. Do not rub it. Most importantly, do not pee on it as suggested by some rumors. Vinegar may help, or salt water. The best method of dealing with jellyfish sting is always going to a hospital as soon as possible.

8, Too many jellyfish can be big trouble.

Jellyfish in large quantities can fill and split fishing nets. They can clog cooling equipment, disable power stations and cause blackouts. As the jellyfish can survive better in nutrient-rich, oxygen-poor water than other animals, it may thrive and becomes a surrogate for fishes and other marine animals under certain circumstances. Climate change also stands on the jellyfish's side: It prospers in warm waters and benefits from the disturbance of marine ecosystems.

9, But they are useful, on the other hand.

Some jellyfish are bioluminescent. They produce an internal glow using green fluorescent protein (GFP). Scientists have extracted GFP and used it as a fluorescent marker of genes in cells or organisms, to show which cells or tissues express specific genes. Three scientists won the 2008 Nobel Prize in Chemistry for their work with GFP. The bioluminescent protein can also help create a biofuel cell that will generate small amounts of energy – enough to power microscopic nanodevices.

The jellyfish helps researchers in other areas too. Some researchers have invented a winged robot that uses jellyfish-like movements to move through the air. In other words, the robot can fly by learning from the jellyfish movement.

10, They even completed space travel.

In 1991, moonfish jellyfish traveled into outer space on the Space Shuttle Columbia so that scientists could examine how microgravity affected them. The jellyfish even multiplied in space. Over 2,000 jellyfish polyps were blasted into space and they reproduced over 60,000 jellyfish. But the space-bred jellyfish weren't able to function properly when they returned to Earth.