Tens of thousands of goats munch Greek island into crisis 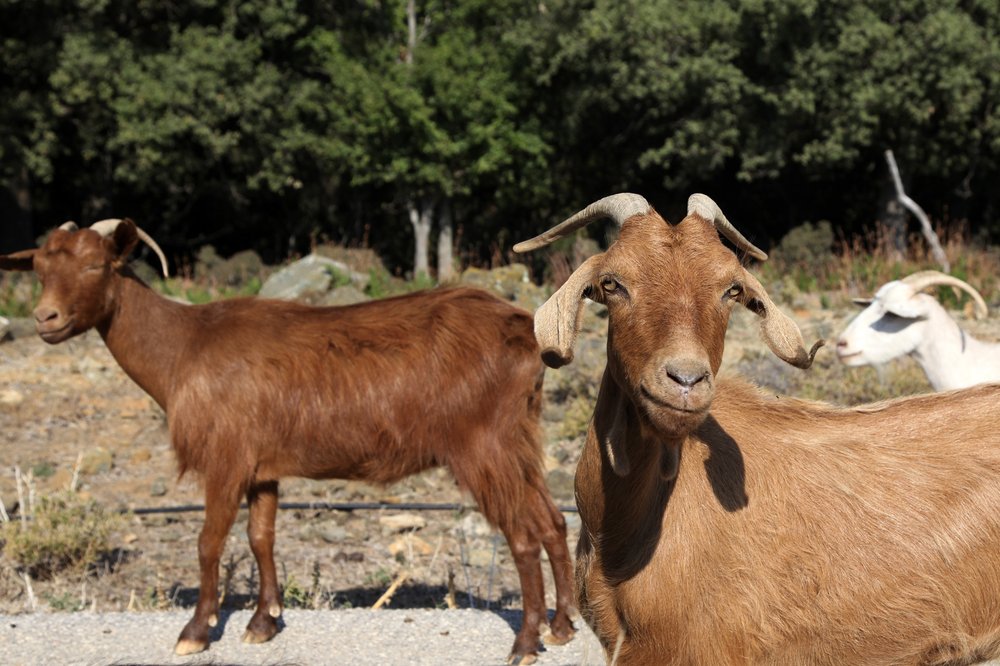 Goats walk by a car on a road near Kato Meria village, on Samothraki island, northeastern Greece, October 8, 2019. Goat herding is a way of life on Samothraki, a hard-to-reach Greek island in the northern Aegean Sea, but experts and locals are working together to control the animal population that has left its mountains barren and islanders under the threat of mudslides. (Photo: AP)

With oak and chestnut forests, waterfalls and rugged coastline, Samothraki has a wild beauty and a remoteness that sets it apart from other Greek islands.

There are no package holidays here or even a reliable ferry service to the mainland. Island authorities hope to achieve UNESCO Biosphere Reserve status. Yet still, the natural environment is under threat from an insatiable assailant.

Goats outnumber human inhabitants 15-fold and they are munching stretches of Samothraki into a moonscape. After decades of trying to find a solution, experts and locals are working together to find a 21st-century way to save the island’s ecology and economy.

Semi-wild, the goats roam across the island, which is roughly three times the size of Manhattan, and can be spotted on rooftops, in trees or on top of cars as they scour the landscape for anything to eat. Their unchecked overgrazing is causing crisis-level erosion.

Torrential rains two years ago swept away the island’s town hall and severed its roads. There were no trees or vegetation left on the steep, goat-eaten hillsides to stop the mudslides caused by the downpour.

“There are no big trees to hold the soil. And it’s a big problem, both financial and real because (the mud) will come down on our heads,” says George Maskalidis, who helps run Sustainable Samothraki Association, an environmental group.

Samothraki, in the northern Aegean Sea, is a two-hour ferry ride south of Alexandroupoli, a Greek city near the country’s border with Turkey.

With just 3,000 inhabitants and hard to access, the island has largely missed out on Greece’s tourism boom. Mountain herding is still a way of life here and despite trying for three decades, regional authorities have found it hard to build a local consensus on how to deal with the issue.

The goat population, meanwhile, soared fivefold to an estimated 75,000 by the late 1990s. Some parts of the countryside were simply nibbled away.

The goat numbers have since dropped to below 50,000 as there is little left to graze on. But this has left the island in a trap. Most of its goats are malnourished and too scrawny to be used commercially for meat, animal feed is too expensive to maintain a sustainable business and much of the soil is too depleted for trees to grow back.

At the same time, prices for wool, leather, meat and milk have dropped, leading Samothraki’s farmers to grow increasingly desperate.

“Most of us are ready to give up. If I had another job, I would drop the goats,” he says, speaking over the noise of jangling goat bells. “It doesn’t make enough to buy you a coffee.”

Herds soared due to European Union subsidies, under a system that critics say was poorly monitored and lacked any long-term planning. It now may have to be reversed as a livestock reduction appears inevitable, along with grazing limits.

But that correction doesn’t have to be painful, at least according to the island’s resident optimist Carlota Maranon, a Spanish lawyer who settled here a decade ago. She heads the sustainability initiative and has eased islanders’ deep-rooted mistrust of solutions from the mainland or beyond.

The environmental group has worked with overseas researchers and helped create a herd management app, among many other pilot projects, to tackle the issue. Fiercely independent livestock farmers have even joined a new cooperative to try to pool resources and establish a brand for the island.

“It is possible to do things in a more sustainable way,” Maranon says. “That might mean fewer goats but that could actually work out better for the farmers.”

Having a tight-knit community, she says, will also help.

“Everyone here is connected to the herders in some way, so this issue affects everyone. To live off the land, you have to keep it alive,” she said.