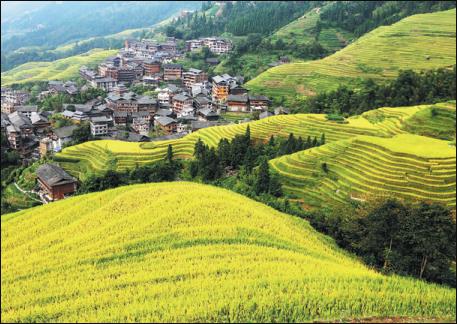 The Guangxi Zhuang autonomous region's Longji township attracts tourists from around the country for its terraced fields and traditional buildings. (Photo: China Daily)

NANNING - In mid-October, the rice terraces in the villages of Guilin, South China's Guangxi Zhuang autonomous region, turned a breathtaking gold color as the harvest season approached, but villagers were not in a hurry to reap the fruits of their labor as visitors poured in to catch a glimpse of the autumn colors.

"I used to rely on good harvests to make ends meet, but now the crop yield is no longer the main source of my family income," says Liao Daoyong, a 58-year-old villager from the Zhuang ethnic group in Ping'an village, Longji township, Longsheng county.

Liao planted over 4 mu (about 0.27 hectares) of rice on the terraced fields and became a stakeholder with a tourism company in the 1990s to co-develop the Longji terraced field.

The terrace has a history of more than 2,000 years and has been included in the Globally Important Agricultural Heritage Systems by the Food and Agriculture Organization of the United Nations as an area of outstanding natural beauty.

Longsheng county is 87.2 percent mountainous with a forest coverage rate of 79.12 percent. The more than 660 hectares of terraces are a feast for the eyes, especially during spring and autumn.

In the past, poor transportation links inconvenienced the local economy, and the county was prioritized during the country's poverty alleviation campaign.

"The rice we grew was not enough to eat due to a lack of paddy fields, and we relied upon government relief when we faced food shortages for one or two months every year," he says.

"Villagers lived in poverty as we made a living on farming. But now we grow rice to cater to the tourism industry, which has helped us enjoy a better life," he adds.

The booming tourism sector has also improved the infrastructure of Ping'an village. since 2009, Liao and his family have also run a guesthouse in the village to accommodate the influx of visitors. "Since the end of September, a dozen guest rooms in my house are almost fully booked," says Liao's daughter-in-law Liang Anjuan.

She adds that the whole family has joined the business and each family member has their own responsibility. Liang is in charge of cleaning the guest rooms and catering. Her husband handles the pickup service for guests and her sister-in-law, who now lives in Guangzhou, capital of Guangdong province, takes care of the online reservations.

There are more than 100 guesthouses in Ping'an, and the demand is still increasing. According to local authorities, during this year's weeklong National Day holiday, about 360,000 tourists visited Longsheng, up 58 percent year-on-year, and the tourism revenue exceeded 300 million yuan.

Besides part-time jobs in the tourism company as ticket inspectors, Liao and his wife still farm on the terraces. Harvesting rice is still of great significance and sustaining a good environment is the villagers' responsibility, he says.

Xiaokang, or "a well-off society", means having a stable family income and a booming industry near home, offering great employment prospects, he adds.