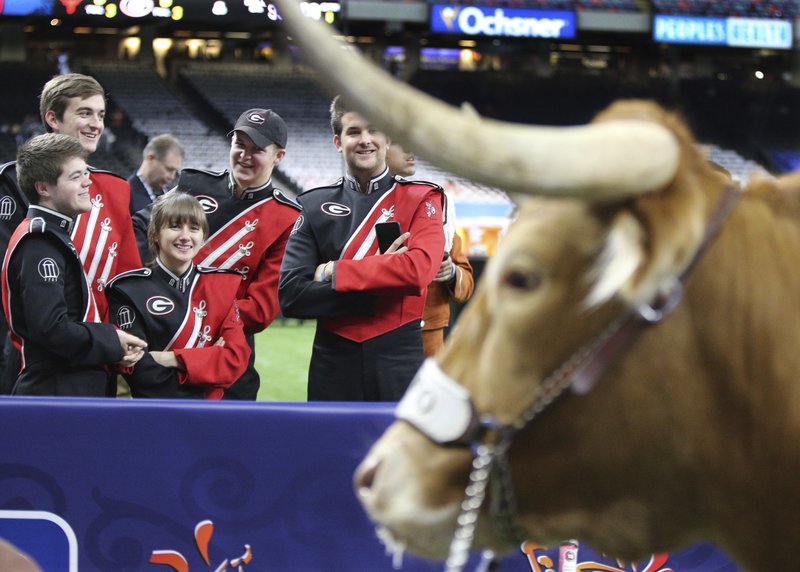 The Texas football program’s mascot, a large white and brown longhorn steer named Bevo, caused a stir at the Sugar Bowl on Tuesday when it knocked down its barricade and briefly charged in the direction of Georgia’s mascot , a bulldog name Uga.

Uga X, an English bulldog wearing a bright red Georgia sweater, was quickly pulled out of harm’s way, but Bevo’s head and horns appeared to make contact with several people, including a couple of photographers, who scampered out of the way or were knocked down.

There were no reported injuries and Bevo was quickly restrained.

The incident, about an hour before kickoff, was caught on video and quickly became a sensation on social media.

While it appeared to many that Bevo was advancing aggressively toward Uga X, the steer’s chief handler disputed that version of events.

Silver Spur alumni association executive director Ricky Brennes, who is in charge of handling the 1,700-pound steer, said Bevo was simply agitated because he wanted to walk and was being restrained.

“He had kind of gone up and bumped the barricade a few times before,” Brennes said. “He ran through the gate and into where Uga’s area was. It really was more just unfortunate timing and he wasn’t aware Georgia’s mascot was there. It had nothing to do with the dog.”

Texas athletics spokesman John Bianco said “all established safety and security measures were in place for Bevo” at the Sugar Bowl, including two halters, two chains and six handlers to hold him.