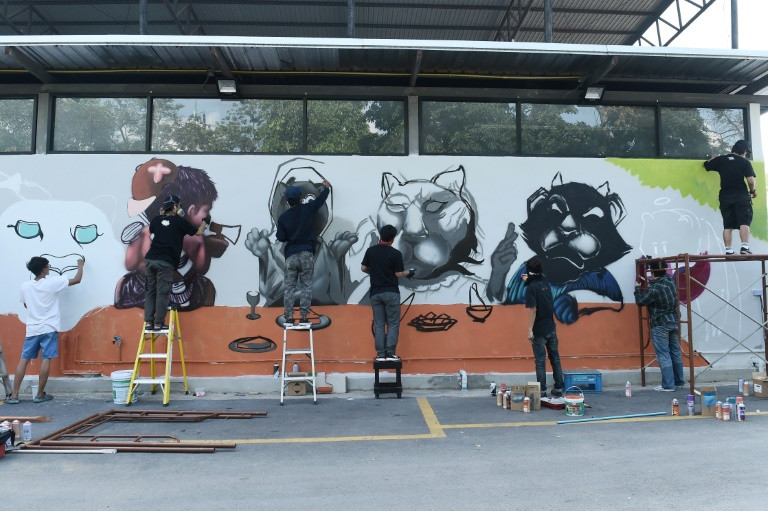 A tycoon's alleged poaching of a black leopard at a wildlife sanctuary sparked outrage among environmental and political activists in Thailand (Photo: AFP)

Bangkok graffiti artists painted a mural on Friday of panthers seated at a "Last Supper" table, the latest subversive depiction of an animal that has come to symbolise injustice after a tycoon was accused of poaching the wild cat.

Construction magnate Premchai Karnasuta, one of Thailand's wealthiest moguls, was arrested in a wildlife sanctuary in February with guns and animal carcasses, including that of a black leopard.

The brazen violation of park rules unleashed a wave of anguish from environmental and political activists fed-up with the impunity enjoyed by the kingdom's elites.

With public protests still banned under a junta that grabbed power in 2014, the anger has taken the form of sly street art focused around the image of the panther.

But the movement has turned into a cat-and-mouse game with authorities suspected of quickly painting over the panther art cropping up in public spaces around the nation.

An animal rights group recently stepped in to pair street artists with private businesses willing to offer up their walls.

That's how ten graffitists found themselves free to decorate the side of a Bangkok veterinary clinic on Friday.

The group spent the afternoon spraying large black cats seated behind a table in a nod to Leonardo da Vinci's "The Last Supper", which depicts Jesus' final meal with his apostles before his crucifixion.

"There are (panthers) from each artist at the same table having dinner for the last time," explained a 28-year-old graffiti artist who goes by "Panda Dew".

Phureerut Ratanavanich, who co-owns the veterinarian clinic, told AFP he hoped the mural would keep the panther story from falling off the front pages.

"This is our silent statement to the world," he said.

"(The artists) want to show their feelings but they don't have a platform. We have the platform but we don't know how to represent it in such an effective way," he added.

The accused tycoon Premchai, who is CEO of Italian-Thai Development, has been charged with a slew of offences for alleged poaching in the protected Thai forest.

This week he was read additional charges of attempted bribery of an official and illegal possession of ivory and guns found during a search of his home.

He has denied wrongdoing and been granted bail while the case proceeds.