CULTURE Thai stars on the rise in China, while South Korean celebrities get cold shoulder

Thai stars on the rise in China, while South Korean celebrities get cold shoulder 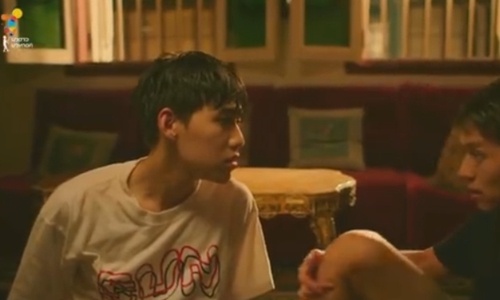 (Photo: screenshot of a video clip on Sina Weibo)

Thai stars and entertainment have been making big headway in China lately. New Thai Boys' Love drama I Told Sunset About You has received high marks on Chinese media review platforms, surpassing the scores of several Chinese works and capturing the hearts of Chinese audiences. Meanwhile, Thai stars in popular dramas introduced to China have been gaining more fans in the country, even edging out some K-pop idols.

The five-episode drama that first began airing in October stars Thai actors Krit Amnuaydechkorn, also known as PP, and Putthipong Assaratanakul, stage name Billkin. The drama currently has a 9.5/10 on Chinese media review platform Douban, which is much higher than the new hit Netflix drama The Queen's Gambit.

Set in Phuket and deeply influenced by Thai-Chinese culture, the coming-of-age romance focuses on teenage boys Tae (Assaratanakul) and Oh-Aew (Amnuaydechkorn), two childhood friends who have been reunited at a language school as they prepare for university exams and later on grow closer both intimately and emotionally.

Two lead actors in the drama entered the spotlight on Chinese social media platforms after the drama went viral, just like many other popular Thai celebrities such as Mew Suppasit (Tharn) and Gulf Kanawut (Type), who gained a huge number of Chinese fans because their appearance in hit Thai dramas.

In addition to playing popular characters, appearing on variety shows is another way that Thai stars have been getting a foot in the door in China.

Thai entertainers Li Ziting and Yang Yunqing, for instance, captured audiences' attention in China through their appearances on a 2018 reality show. Meanwhile, two Chinese video platforms, Youku and Tencent, are preparing to debut competition shows in 2021 that will select outstanding young Thai talents to form an idol group together with other Chinese singers and dancers.

These moves, along with the rise in popularity of Thai dramas, are indicators of the increasing influence of Thai entertainment culture in China.

While Thailand's stars are rising in China, the opposite has been the case for South Korean entertainment in recent months due to a string of controversies.

A large number of once popular South Korean boy and girl bands have raised the ire of Chinese netizens with controversial actions or statements, putting the reputation of K-pop in China at risk.

For instance, South Korean hit boy band BTS's one-sided attitude when talking about the 70th anniversary of the Korean War enraged Chinese netizens, leading many Chinese fans in the country to quit the band's fan club.