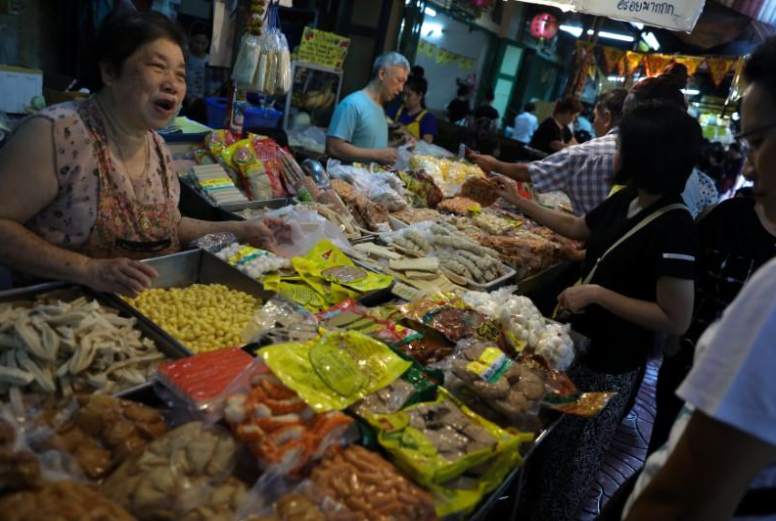 Tiny yellow flags fluttered over shops and stalls in Bangkok’s Chinatown to show those with vegetarian-friendly dishes. The festival is particularly popular among Thai Chinese.

Spending on food, transport and donations to Buddhist temples to ‘make merit’ during the festival was expected to reach 45 billion baht ($1.4 billion), the highest since estimates began 10 years ago, the Thai Chamber of Commerce said.

“Many Thais wish to commemorate the late King Rama 9 through taking part in the festival,” Thanawat Polwichai, Director of the Center of Economic and Business Forecasting told Reuters.

“Normally I don’t take part in the vegetarian festival but this year I planned to, mainly due to health reasons, but also because I wanted to make merit and pay respects to King Rama 9,” said Nopawan Wattanawanna, 40, in a Chinatown tea shop.

Adherents of the festival believe nine gods descend during the period to judge people’s deeds. People who abstain from eating meat, drinking alcohol and sinful behavior will be blessed.

In Chinatown, a big majority of food sellers had transformed their menus to serve delicacies made from meat substitutes and soy protein.

Thailand’s Food and Drug Administration said, however, that it had found traces of animal DNA in three of 71 samples of meat substitute it had tested. It was still waiting for results from seven others.

The festival began over 150 years ago on the popular tourist island of Phuket some 840 km (520 miles) south of Bangkok.