CULTURE Thailand makes one of its 'largest ever' crystal methamphetamine busts

Thailand makes one of its 'largest ever' crystal methamphetamine busts 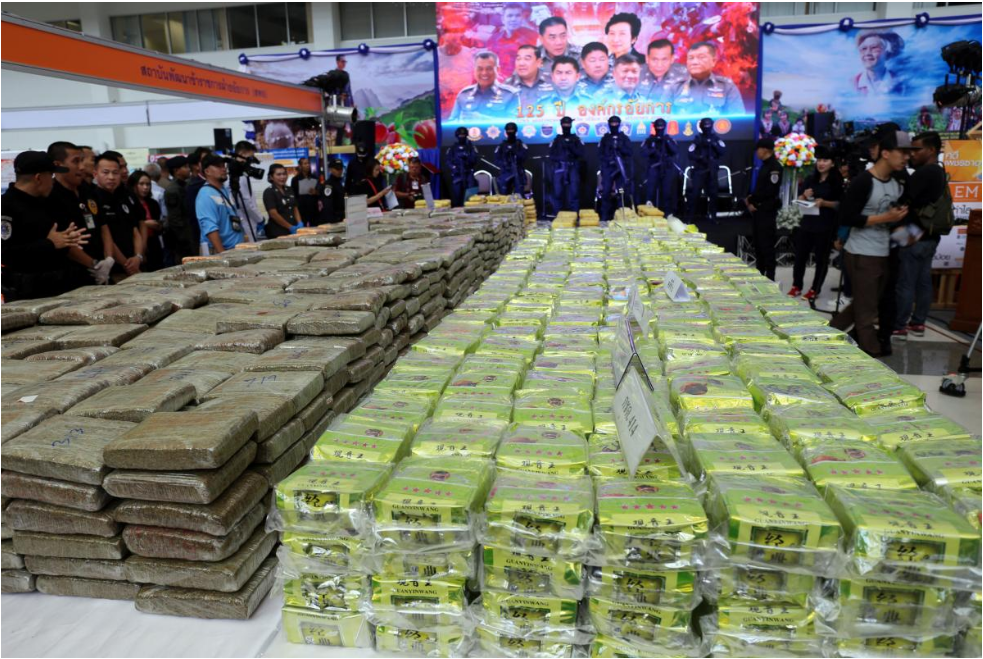 Thailand police shows one of its largest crystal methamphetamine busts during a news conference in Bangkok, Thailand April 3, 2018. (Photo: Reuters)

Thailand has made one of its largest crystal methamphetamine busts, seizing 700 million baht ($22.42 million) worth of the drug, police said on Tuesday, as the United Nations warned Southeast Asia was being flooded with illegal drugs from the “Golden Triangle” region.

Police said 700 kilograms (1,543 lbs) of the drug, known as ice, was seized on March 28 in southern Chumpon Province and were destined for Malaysia.

The drugs were produced in the Golden Triangle region, where the borders of Thailand, Myanmar and Laos meet. Two Thais and two Malaysians were arrested in connection with the bust.

“These big seizures are indications that there is a relentless supply pumping out of the Golden Triangle and north Shan to flood Southeast Asian markets and also transit Southeast Asia to high value markets like Australia, New Zealand and potentially further,” Jeremy Douglas, the UNODC’s chief in Southeast Asia, told Reuters.

Police displayed the haul on Tuesday at a government compound north of Bangkok. Other drugs on display included 890 million baht ($28.51 million) worth of illicit drugs, including cocaine, cannabis and ecstasy, seized in various busts between March 25 and April 1.

Most of the drugs were produced outside of Thailand and were trafficked through the country en route to Australia, North America and Europe.

“The prices we announced are the values in Thailand,” Police Lieutenant General Sommai Kongvisaisuk, commander of the Narcotics Suppression Bureau, told reporters.

“Once the drugs pass through Thailand the prices will increase,” Sommai said, adding that disruptions to supply chains has done little to stall production.

“We have intercepted a lot of drugs over the past year ... but the production capacity remains untouched.”