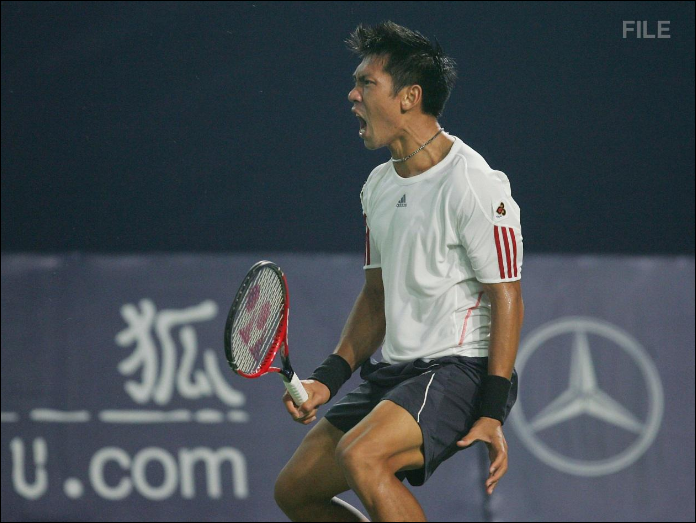 Paradorn Srichaphan of Thailand reacts to winning a point during his semi-final match against Maricos Baghdatis (not pictured) of Cyprus during the China Open in Beijing, September 16, 2006.(Photo: VCG)

In the latest installment of CGTN Sports Scene's tennis series, Beyond the Baseline, former Asian number one, Paradorn Srichaphan of Thailand, spoke at length about his current role and the gap between Asia and Europe in the men's game.

Srichaphan, who is now a WTA official and is currently in Beijing for the ongoing China Open, was the first Asian man to be ranked in the top ten. He has been retired for almost a decade, but never left the sport he loves.

The former Thai tennis ace didn't hide his affection toward China and the China Open, saying, "I love to visit China again and again, and I really love the China Open in Beijing. I have got some good memories here."

"It's been 15 years and the tournament has developed really well. I played in 2003-2004 and that time, it was played in a different stadium. This time, I have been surprised by the quality of the new stadium and the tennis infrastructure."

One of the most prominent Asian tennis players of all time, Srichaphan mentioned, "When I started, it was an important time for tennis and more importantly for Asian tennis to grow, and before me, my idol Michael Chang did well to help. It was great Asian tennis."

It's been a while since he had hung up his racket, but Srichaphan has been giving back to the sport which once made him a superstar. "I am still involved in tennis and it's my passion. Now I am wearing a different hat and not the player's hat anymore. I am a tournament director now and I am really happy to be in that role," the Thai said.

He also added, "Meanwhile, I am also running my Paradorn Tennis Academy back home, where I have been training young players from the age of 12 to 18 in order to continue their dreams and leading the way."

Being one of the biggest names from Asian tennis, he also felt that “the gap between Asian and European tennis is narrowing. Still, there is a way to go. I think we have to have some good programs and tournaments like the China Open are actually helping the younger kids come to the tournament."