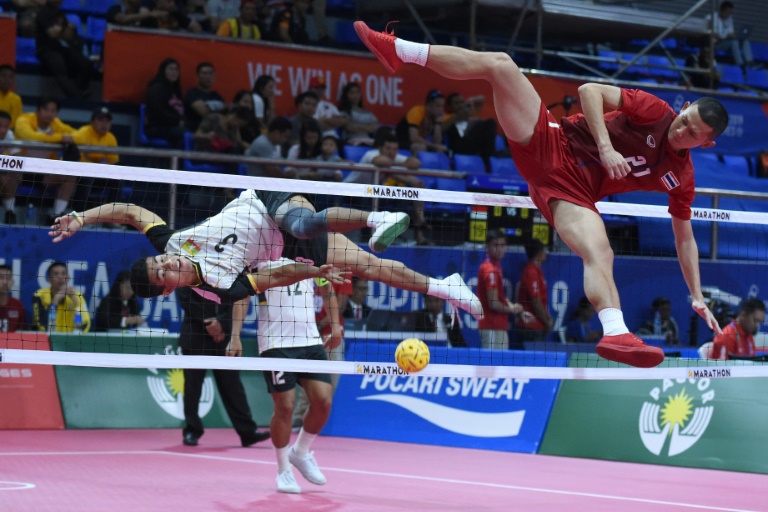 Relatively unknown outside the region, sepak takraw involves players showing incredible acrobatic and footballing skills to keep a rattan ball from touching the ground and launching it over the 1.52-metre high net into their opponents' court.

As the Games enter their final few days in the Philippines, the win for Thailand keeps them in fourth position in the overall table with 42 golds, behind Vietnam in third (49), Indonesia in second (55), and the host nation, who have been runaway leaders since the start and currently have a golden haul of 92.

Seven of the last 11 home nations have finished top of the medals table at the SEA Games, where the flexible sporting programme is traditionally heavily weighted towards the home team.

Thailand won all four of their sepak takraw team regu matches -- in which teams are split into sub-groups of three -- against Malaysia, Indonesia, the Philippines and Sunday's opponents Myanmar.

In Sunday's other team regu clash at the Subic gymnasium, around 80 kilometres (50 miles) northwest of Manila, Malaysia came from behind against Indonesia to secure the silver medal.

Later at the 20,000 capacity stadium at the Games' main hub in New Clark City, medals will be up for grabs in the women's javelin, long jump, pole vault and hammer, while the men will compete for high jump and shot put golds.

In the nearby aquatics centre, there will be finals in the women's 50m freestyle and 4 x 100m medley relay, while the men will contest the 50m breaststroke and 100m freestyle events, and golds will be given out to 400m individual medley winners for both men and women.

Thailand take on neighbours Vietnam in the final of the women's football in Manila on Sunday evening, and the first eSports medals at a multi-sport competition sanctioned by the International Olympic Committee will be awarded at the San Juan Arena in the capital.

About 8,750 athletes and officials are taking part in the regional Olympics spread across dozens of venues in the northern Philippines, which was hit by a deadly typhoon earlier this week.

The 11-country Games, featuring a record 56 sports, were rocked by Typhoon Kammuri which forced about half of Tuesday's events to be rescheduled.

Despite more than a dozen deaths in the storm, none of the athletes, officials or 12,000 volunteers was reported hurt and a full programme resumed on Wednesday.