CULTURE The best of Israel coming for culture week

The best of Israel coming for culture week 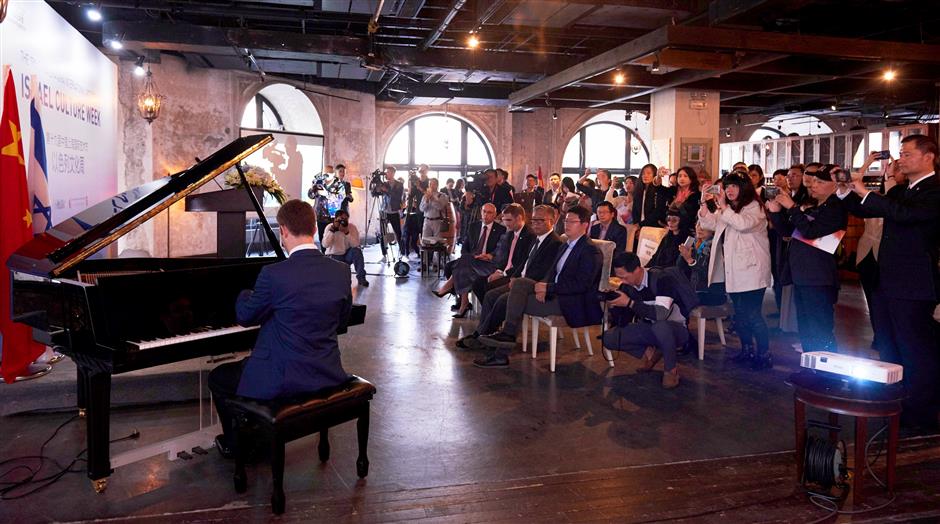 Israeli pianist Yaron Kohlberg charmed his invited Chinese guests ahead of the opening of the Israel Culture Week next week with a popular Chinese melody “Colorful Clouds Chasing the Moon” that set the stage for the evening.

Israeli arts and artists are relatively new to China. But Chinese talents like the well-known dancer and TV hostess Jin Xing have long admired them and were keen to introduce them to the Chinese audiences.

Jin recounted her amazement when she visited Israel more than 10 years ago that led to the staging of the first Israel Dance Week soon after.

This time, the Israel Culture Week, part of the ongoing Shanghai International Arts Festival, includes more than just dances. To be held from November 10 to 15, the programs will feature Israeli music, dance and theater to local audiences.

The repertoire includes a recital by four-time Emmy- and 15-time Grammy-winning violinist Itzhak Perlman, modern dance “Icetree” by Inbal Pinto & Avshalom Pollak Dance Company, recitals by Kohlberg who has both played and won awards across continents and a concert by actress and singer Ester Rada.

The week’s program also contains master classes and workshops in addition to the performances.

“Over the past years, the festival has rightfully earned its reputation as the most prestigious art event in China, and choosing Israel to be the country of honor is a great privilege for us,” said Tzipi Hotovely, deputy foreign minister of Israel, as the two countries mark 25th anniversary of diplomatic ties.

The opening performance, “Icetree,” is a collaboration between choreographers Inbal Pinto and Avshalom Pollak and is an adaptation of Romanian-French playwright Eurene Ionesco’s absurd play “The Chairs.”

Perlman, who was honored with a Grammy Lifetime Achievement Award in 2008, has won multiple Grammy Awards for Best Instrument Soloist Performance (with orchestra), Best Chamber Music Performance and Best Classic Album since the 1970s.

The 72-year-old violinist has performed in many unique occasions including the state dinner at the White House honoring Queen Elizabeth II in 2007 and the 2009 inauguration ceremony for former US President Barack Obama.

This time, he will be accompanied by Sri Lankan pianist Rohan De Silva, a long-time collaborator, and will perform melodies of Franz Schubert, Richard Strauss and Claude Debussy.

Kohlberg, who speaks six languages including Chinese, has been living and working in China and recently opened a studio in Shanghai. He has played in 40 countries across continents as well as in over 20 Chinese cities over the years.

This time, his repertoire will include a variety of different styles covering classic melodies from Chopin and Debussy to modern film scores like “Imperial March” from “Star Wars.”

In addition to the performance at Shanghai Concert Hall, he will also play at Shanghai International Studies University and Donghua University.

Rada, who released her first EP “Life Happens” three years ago, has toured around the world from small clubs to large events such as the 2016 Olympic Games in Rio. She will bring some of the songs from her latest album to Shanghai Urban Lawn Music Plaza, a new outdoor venue in the city’s downtown area.